The GBP/USD pair started the week under bearish pressure after failing to reclaim 1.3500 in the previous week. With the greenback continuing to gather strength against its major rivals on the back of rising US Treasury bond yields, the pair extended its slide below 1.3300 and touched its lowest level since December 2020. Ahead of the weekend, the intense flight to safety triggered a sharp drop in yields and allowed GBP/USD to erase a small portion of its weekly losses.

The data published by IHS Markit revealed on Tuesday that the economic activity in the UK’s manufacturing and service sectors continued to expand at a robust pace in early November. Despite the inspiring PMI readings, the British pound struggled to find demand. Commenting on the survey, "for policymakers concerned about the health of the labour market after the end of the furlough scheme, the buoyant jobs growth signalled should bring some reassuring comfort." said Chris Williamson, Chief Business Economist at IHS Markit. Bank of England (BoE) policymakers, who were concerned about wage inflation feeding into persistent price pressures, could see that as a welcoming development and reassess the need to hike the policy rate by 20 basis points in December.

In fact, BoE Monetary Policy Committee (MPC) member Silvana Tenreyro said on Wednesday that she would not want to say specifically if the BoE would make its first rate hike in either December or February. Tenreyro added that she was expecting a “modest tightening policy.”

The latest headlines surrounding post-Brexit negotiations showed that sides are not expecting to come to a conclusion before the end of the year. Nevertheless, European Commission Vice President Maroš Šefčovič adopted a relatively optimistic tone, noting that there was a clear political will from the UK to solve the Northern Ireland protocol issues.

In the meantime, the dollar capitalized on hawkish comments from Fed officials and upbeat data releases from the US throughout the week and weighed heavily on GBP/USD. Additionally, US President Joe Biden’s decision to nominate Jerome Powell for a second four-year term as the Fed chair reassured markets of a stable and consistent policy outlook.

The US Bureau of Economic Analysis reported that the Core Personal Consumption Expenditures (PCE) Price Index, the Fed’s preferred gauge of inflation, climbed to 4.1% on a yearly basis in October from 3.7% in September. The weekly Initial Jobless Claims dropped to 199K from 270K, Personal Spending and Personal Income increased by 1.3% and 0.5%, respectively, on a monthly basis in October.

San Francisco Fed President Mary Daly, who earlier in the month argued that the Fed should stay patient in the face of high inflation, said on Wednesday that it could be appropriate to speed up the pace of reductions in asset purchases.

On Friday, escalating fears over the new coronavirus variant slowing down the global economic recovery caused safe-haven flows to dominate the financial markets. The 10-year US T-bond yield fell nearly 8% and forced the dollar to weaken. The probability of the Fed leaving its policy rate unchanged by June 2022 rose to 34% from 18% mid-week, according to the CME Group’s FedWatch Tool.

In the week ahead, there won’t be any high-tier macroeconomic data releases from the UK. On Wednesday, the ADP Employment Change and the ISM Manufacturing PMI will be featured in the US economic docket.

On Friday, the US Bureau of Labor Statistics will release the November jobs report. A stronger-than-expected increase in Nonfarm Payrolls (NFP) could help the greenback regather its strength. Nevertheless, investors will pay close attention to coronavirus headlines and how Fed policymakers assess the impact on the policy outlook before the Fed goes into the blackout period on Saturday, December 4. In case FOMC members sound reluctant to speed up the reduction in asset purchases, the dollar is likely to stay on the back foot.

On the other hand, UK interest rate futures were last seen pricing a 55% chance of a 15 basis points BoE rate hike in December, compared to a 75% probability on Thursday. British Health Secretary Sajid Javid announced on Friday that flights from six African countries will be banned from 12:00 GMT on Friday. Investors might want to stay away from the British pound if they think that the rate outlook will be affected by the new coronavirus variant.

In short, GBP/USD could find it difficult to stage a convincing recovery next week but the pair’s losses are likely to be limited, opening the door for a consolidation phase in between key technical levels. 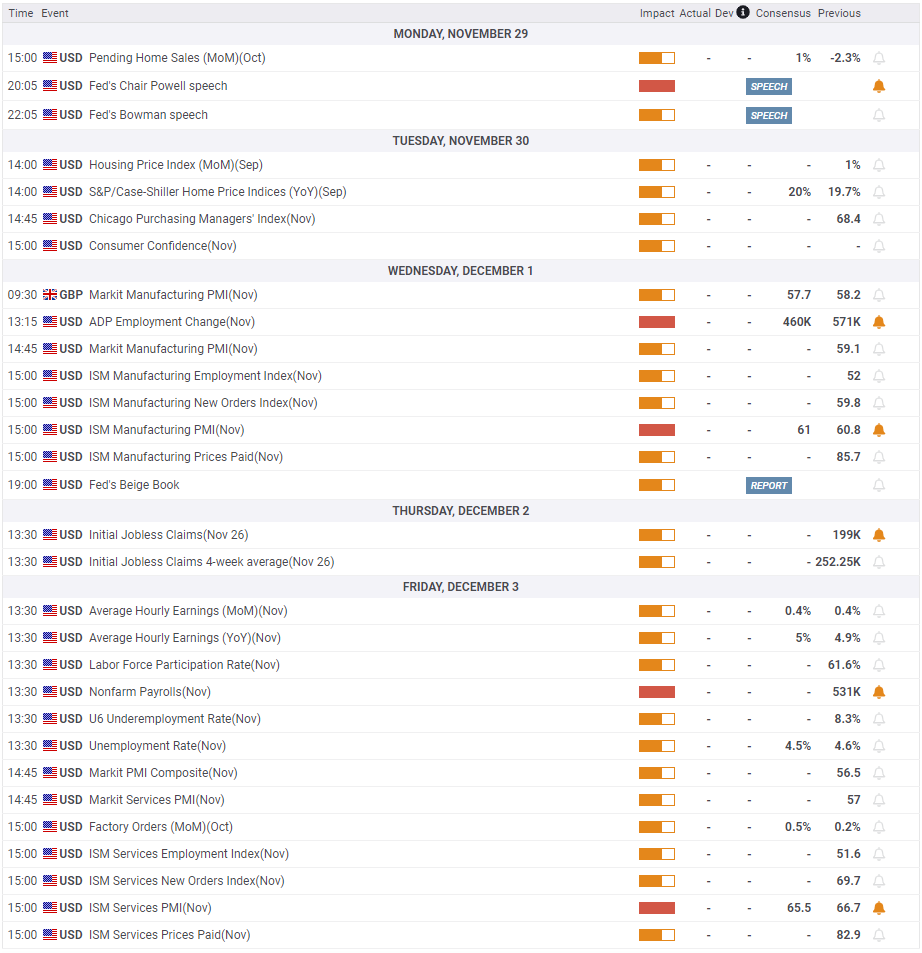 The Relative Strength Index (RSI) indicator on the daily chart is edging slightly higher toward 40, suggesting that the bearish pressure has started to ease off. On the upside, GBP/USD faces initial resistance at 1.3400 before 1.3460 (20-day SMA, Fibonacci 50% retracement of the long-term uptrend). In case the pair manages to hold above the latter and starts using it as support, it could target 1.3500 (psychological level).

On the downside, strong support seems to have formed near 1.3280 (2021-low, Fibonacci 61.8% retracement). With a daily close below that level, sellers could eye 1.3200 (psychological level) as the next target.

Although experts don't see GBP/USD extending its rebound in the near term, they see the pair targeting 1.3500 by Christmas. 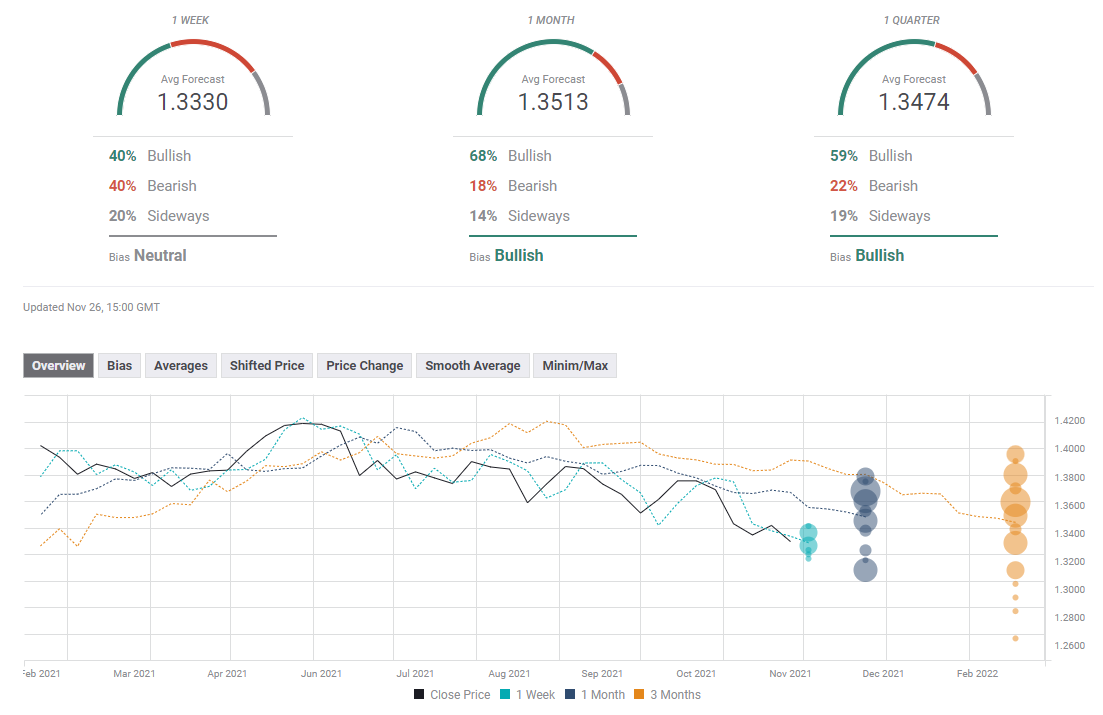 GBP/USD battles key supports as sellers poke 1.3460 during early Thursday. The cable pair broke the 200-SMA following the US Federal Reserve’s (Fed) hawkish verdicts. However, clear trading beneath the same becomes necessary to convince the bears.

Binance Coin price must reclaim $414 as support in order for the bulls to target higher levels. BNB may be confronted with a stiff hurdle at the 50% retracement level at $504. However, if Binance Coin fails to slice above $414, the exchange token may drop lower toward the 200 three-day SMA.

The Federal Reserve kept its rate policy on schedule, indicating in its statement and Chair Jerome Powell’s press conference that it will raise the fed funds rate at the March meeting for the first time in three years.