Nothing could stop GBP bears in the last week, as GBP/USD booked two straight weeks of decline. The US Federal Reserve (Fed) and the Bank of England (BOE) rate hike decisions underscored the widening policy divergence while geopolitical tensions also played a part in the pair’s over-400-pips weekly loss. Next week, all eyes will be on the US economic data and Fedspeak, as the UK docket remains relatively scarce.

The US dollar consolidated the inflation-led upsurge at the start of the week on Monday, as traders chose to pause ahead of the quartet of critical central banking decisions. This allowed GBP/USD to breathe a sigh of relief after the sell-off to fresh multi-decade lows. Markets also took note of the renewed US-China tensions over Taiwan after US President Joe Biden said over the weekend that the US military would defend Taiwan in case China were to try to invade the island.

The GBP/USD reprieve happened to be temporary, as bears returned with pomp and showed aggressive tightening expectations from the Fed after Swedish central bank, Riksbank, surprised markets with a 100 bps rate hike on Tuesday. The downside, however, in the major remained cushioned by growing hopes that the BOE would launch a 75 bps rate hike, as markets priced two three-quarter points BOE rate increases by the end of the year. Expectations of bold rate hikes by central banks dampened sentiment on global stocks, bolstering the safe-haven demand for the US dollar.

The selling interest around the pair gathered steam on Wednesday, as investors preferred to hold the US currency amid renewed Russian aggression and ahead of the all-important Fed interest rates decision. The dollar rally strengthened on an intense flight to safety after Russian President Vladimir Putin announced a partial military mobilization, accusing the West of trying to destroy Russia. Later in the day, the Fed hiked the key rates by the expected 75 bps to 3-3.25% but it was the terminal rate projection of 4.6% in 2023 that triggered a fresh upswing in the dollar. By the end of 2024, the policy rate is projected to retreat to 3.9%. Fed Chair Jerome Powell and his fellow colleagues signaled that higher rates are likely to persist for longer, driving the US Treasury yields to levels unseen in nearly 10 years while the dollar index (DXY) to fresh two-decade highs above 111.50. As a result, GBP/USD surrendered the 1.1300 barrier.

The dollar witnessed follow-through buying interest on Thursday and refreshed 20-year highs at 111.81, which smashed cable to a new 37-year low of 1.1212 ahead of the BOE policy announcement. The prior sell-off in the major allowed bulls to stage a tepid rebound above 1.1300 even though the BOE disappointed markets with 50 bps rate hike to 2.25%, with a more cautious tone. The dovish BOE lift-off prompted markets to price a 75% chance of a 50 bps hike in November. The GBP/USD recovery was also supported by a broad correction in the dollar, in the face of a collapse in the USD/JPY pair following the Japanese yen intervention.

The dollar bulls regained poise on the final trading day of the week, leaving the major exposed to further downside risks. GBP/USD came under fresh selling pressure and hit a new multi-decade low below 1.1000. The UK S&P Global Services contracted to 49.2 when compared to August’s final reading of 50.9 and 50.0 expected while the Confederation of British Industry's latest Distributive Trades Survey revealed that the Retail Sales Balance plunged to -20 in September from +37 in August. British Finance Minister Kwasi Kwarteng’s ‘mini budget’ also failed to rescue GBP bulls. In the second half of the day, the better-than-expected PMI figures from the US fueled another leg higher in the DXY and further weighed on the pair.

Markets brace for a relatively calmer week, which is flooded with speeches from various Fed officials while the calendar lacks top-tier economic data from the UK.

Risk sentiment, however, will play a crucial role amid resurfacing Russia tensions and the deepening European and the UK gas crisis.

In terms of macro news, Monday is absolutely data-empty. The US Durable Goods Orders, CB Consumer Confidence and New Home Sales data will be reported on Tuesday. Ahead of that, Fed Chair Jerome Powell is due to participate in a panel discussion about digital currencies at an event hosted by the Bank of France.

On Wednesday, BOE policymakers Jon Cunliffe will entertain traders ahead of the US Pending Home Sales release. The American Q2 GDP final revision will be reported on Thursday alongside the weekly Jobless Claims data. A speech from BOE MPC member Dave Ramsden will be also awaited.

Friday will see the releases of the final Q2 UK GDP and Current Account data. The data set is unlikely to have much impact on the pound. Later that day, the US PCE Price Index data will be closely examined for fresh cues on the Fed rate hike outlook. Besides, the revised UoM Consumer Sentiment will also drop in. 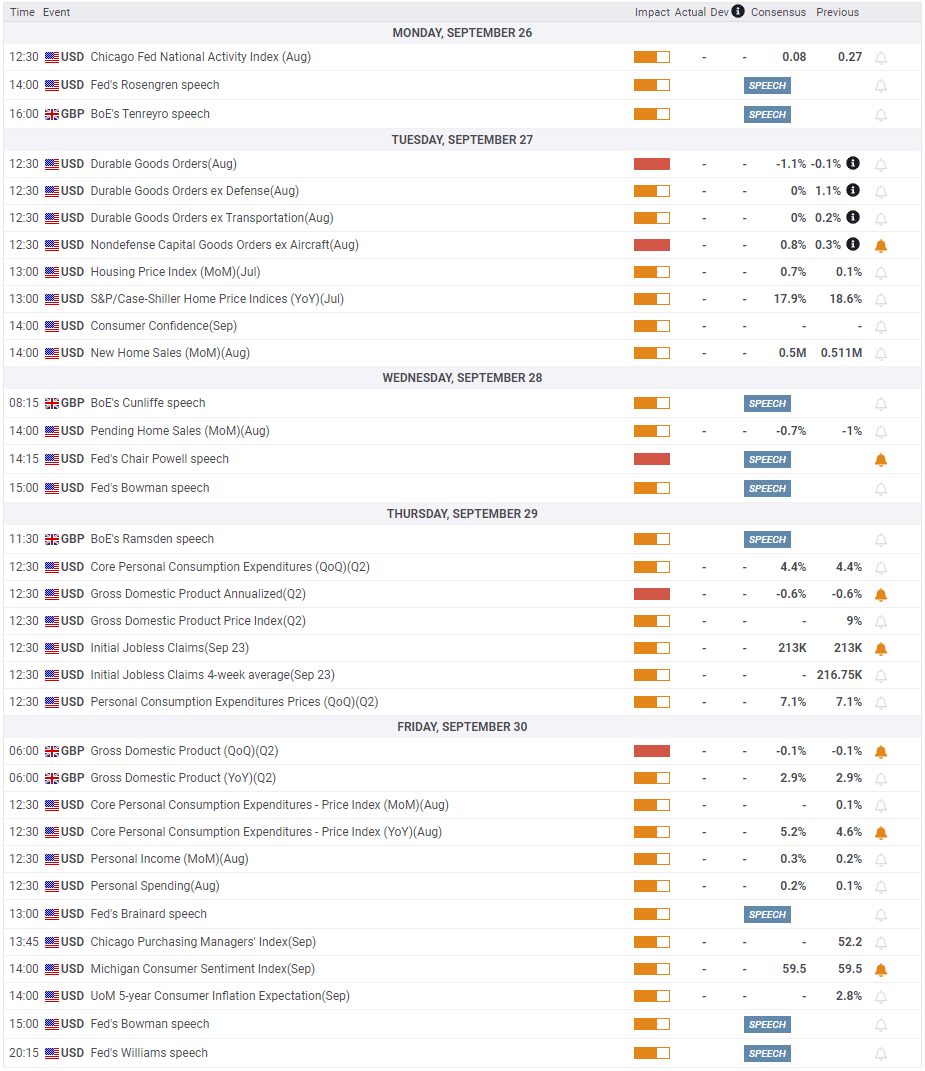 The daily chart points to extremely oversold conditions for GBP/USD. The Relative Strength Index (RSI) indicator is now at its lowest level since late April near 20 and the pair is trading way below the descending regression channel coming from January.

In order to convince investors of a steady recovery/technical correction, GBP/USD first needs to reclaim 1.1100 (psychological level) and return with the descending channel by rising above the lower limit, currently located at 1.1200. In case the pair stabilizes above the latter, it could extend its rebound toward 1.1400 (mid-point of the descending channel, 20-day SMA).

Nearly every expert who took part in FXStreet Forecast Poll expects GBP/USD to stage a rebound in the short term. Average targets on the one-week and one-month outlooks stand at 1.1220 and 1.1407, respectively. 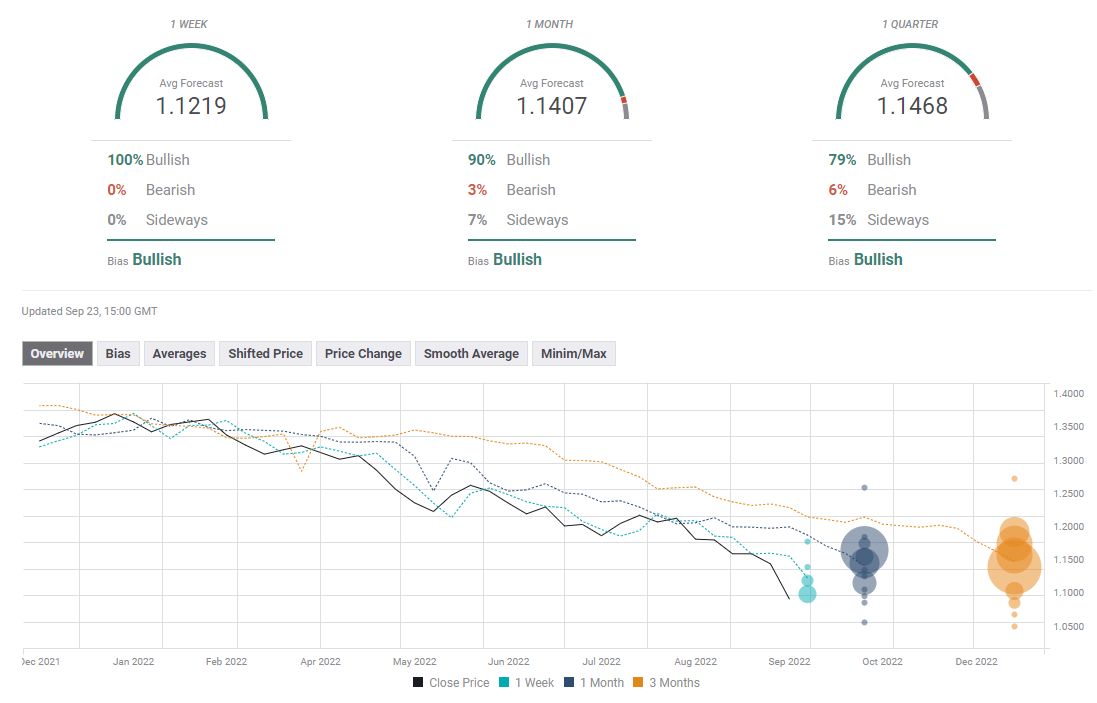