Yesterday’s signals were not triggered as unfortunately the bearish turn from the resistance level identified at 1.3350 did not complete until 5pm London time, but that level did cap yesterday’s high to the pip so was very accurate.

I wrote yesterday that the volatility and strength of the bullish move were unusually high, so we were more likely than not to see the price rise again today. Therefore, I would again take a bullish bias if we get a healthy bullish candlestick over the first hour of the London session. This was a good call as we did get such a bullish move, and the price continued to advance over the London session before halting precisely at my next resistance level at 1.3350.

It seems less likely that the price will rise again today, although there is definitely a medium to long-term bullish trend in the Pound. We may require a retracement, and in any case, the Dollar may strengthen if the U.S. GDP data is especially positive when it is released later.

The major cause of the GBP bullishness, with this pair hitting new 10-month high prices yesterday, is a seeming willingness emerging from the British government to delay Brexit beyond 29th March, which begins to call into question whether Brexit happens at all.

I would stand aside until after the U.S. data release, but the Pound is worth keeping an eye on and there could be a good trade here later. 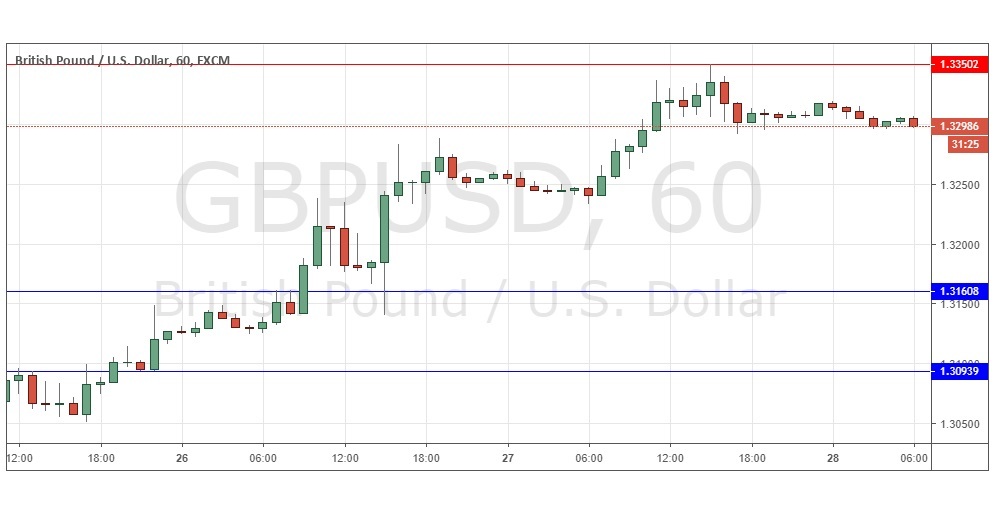 There is nothing of high importance due today concerning the GBP. Regarding the USD, there will be a release of Advance GDP data at 1:30pm London time.