I wrote yesterday that the price action looked very dead right now, with the Euro more in the spotlight. The action was still generally bullish but unpredictable as the fight over the terms of Brexit continues with no resolution.

I had no directional bias on this pair and awaited political developments.

The Pound has strengthened notably over recent hours, probably forming new higher support at 1.3094. What has caused this change is a shift in power in favour of forced trying to stop Brexit in the U.K. as the opposition Labour Party moves towards supporting a rerun of the 2016 referendum aimed at overturning the result and a group of Conservative government ministers threaten to resign. Additionally, the new anti-Brexit TIG party is polling strongly in a new opinion poll which has just been released. The U.K. seems to be losing its nerve as it heads towards the negotiation endgame and may well capitulate and even delay or overturn Brexit and this is likely to push the Pound higher.

I would take a bullish bias if the price can trade for a couple of hours above 1.3161 during the first half of the London session. 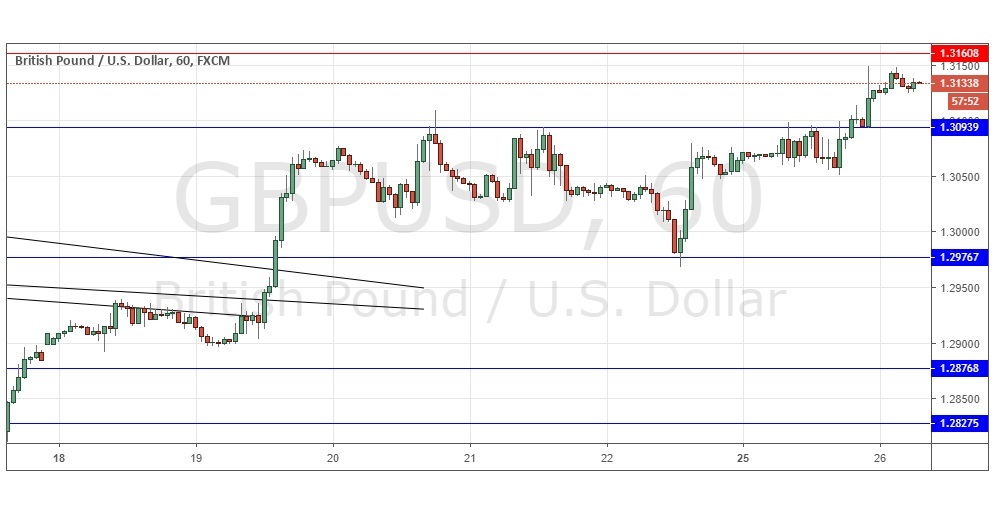 Concerning the GBP, the Governor of the Bank of England will be testifying before Parliament at 10am London time. Regarding the USD, there will be a release of CB Consumer Confidence data at 3pm as well as testimony before the Senate from the Chair of the Federal Reserve.