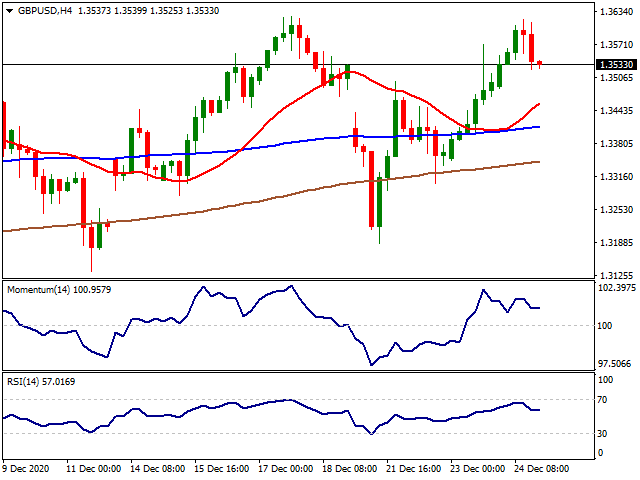 The GBP/USD pair peaked at 1.3618 as hopes for a post-Brexit trade deal continued to underpin the pound. The pair retreated to settle in the 1.3550 price zone after an agreement was finally reached on Christmas Eve. During the weekend, the EU and the UK published the full text of their post-Brexit arrangement, which includes details on trade, law enforcement and dispute settlement among other things.

The accord needs to be ratified by the respective parliaments. On fisheries, the most controversial issue, both parts agreed on a  five-and-a-half-year transition period, in which EU fishing vessels will still have full access to UK waters, with a 25% cut gradually imposed to its fishing quota. The UK will celebrate Boxing Day this Monday, with local markets closed and no major developments expected in the kingdom.

The GBP/USD pair retains its bullish stance. The daily chart shows that the price holds above bullish moving averages, while technical indicators have bounded from their midlines, maintaining a moderate upward strength within positive levels. In the 4-hour chart, the risk is also skewed to the upside, as technical indicators stabilized within positive levels after correcting extreme overbought conditions, as the pair develops well above all of its moving averages.