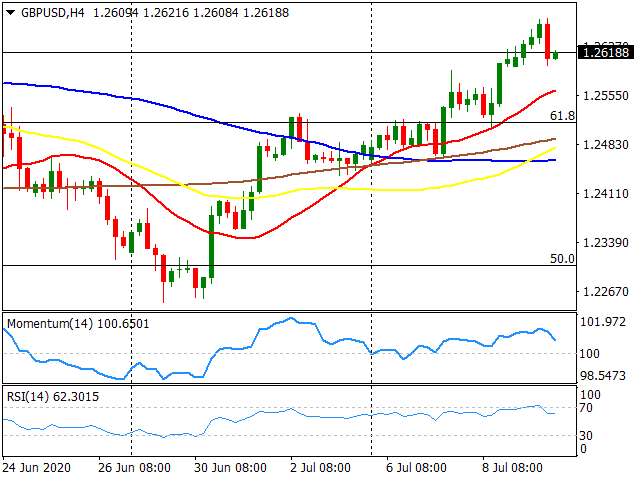 The GBP/USD pair is holding onto gains on Thursday and is poised to post its fifth consecutive daily gain, although it has moved off from its daily peak during the American session. After reaching a fresh three-week high of 1.2669 during the European session, the pair gave up most of its gains as the dollar strengthened amid a deterioration in market sentiment. However, the British pound has remained supported by the announcement of a £30 billion stimulus package. On Wednesday, Chancellor of the Exchequer Rishi Sunak laid out a detailed program including a job retention scheme and other means of boosting the economy.

The short-term technical picture remains bullish for the GBP/USD, with indicators in positive territory in the 4-hour chart and the RSI having already corrected oversold conditions, while the 50- and 100-period SMAs have made a bullish cross. Next resistance is now seen at 1.2688, 200-day SMA and the 1.2700 psychological level. A break through the 1.2688-1.2700 area could open the door to further gains targeting 1.2813, June monthly high. On the other hand, immediate support is seen at Wednesday's lows in the 1.2510 area, followed by the 20-day SMA at 1.2480. If the pound loses the latter, it could weaken the short-term bullish structure and pave the way to the June lows.