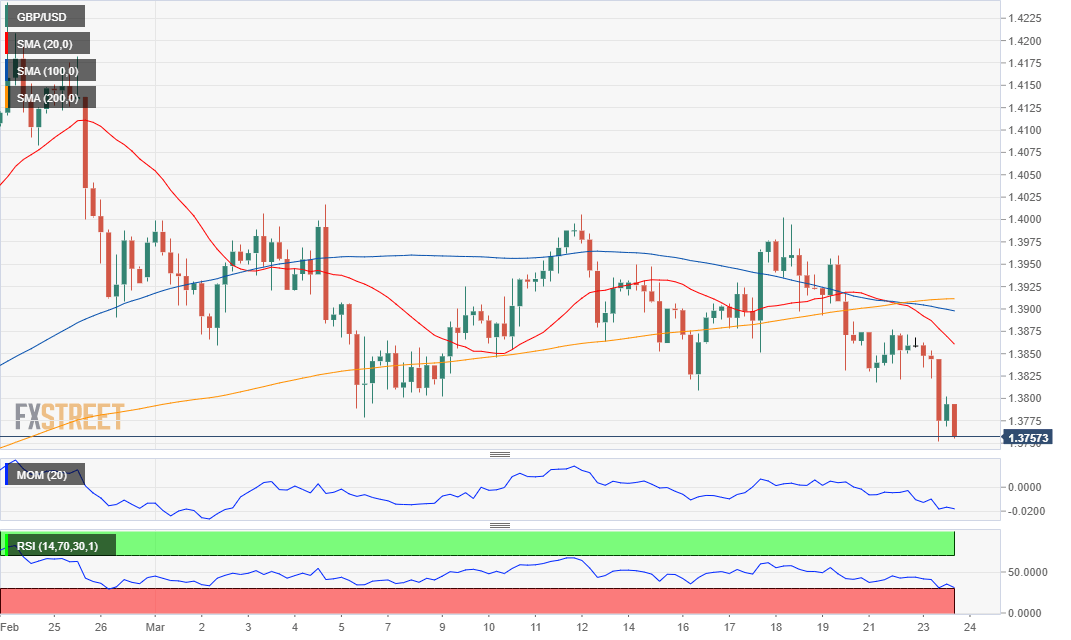 The GBP/USD pair fell to 1.3751, its lowest since early February, as the greenback got fueled by risk aversion while the pound was smashed by poor UK  data. The country reported that in February, the number of unemployed people increased by 86,600. The ILO Unemployment rate for the three months to January decreased to 5%, better than the expected 5.2%. Average Hourly Earnings in the same period increased by less than anticipated, with wages excluding bonus at 4.2%.

The UK’s macroeconomic calendar will remain busy on Wednesday, as the country will release February inflation data. The Consumer Price Index is foreseen at 0.8% YoY, while the core reading is expected steady at 1.4%. Markit will publish the preliminary March Manufacturing PMI, foreseen at 55 from 55.1, and the services index, expected at 51 from 49.5 previously.

The persistent dollar’s strength maintained the GBP/USD pair below the 1.3800 threshold, currently trading a few pips above the mentioned daily low. The 4-hour chart shows that the pair has plunged below its moving averages, while the 20 SMA turned firmly bearish below the larger ones. Technical indicators reached oversold levels, partially losing their bearish strength afterwards. Nevertheless, the risk remains skewed to the downside, with further slides expected once below 1.3720, the next support level.

Gold struggles around yearly resistance line with eyes on Fed

Gold bounces off intraday low to extend the previous day’s recovery moves towards a one-year-old descending trend line. That said, the yellow metal picks up bids to $1,841 by the press time of Tuesday’s Asian session.