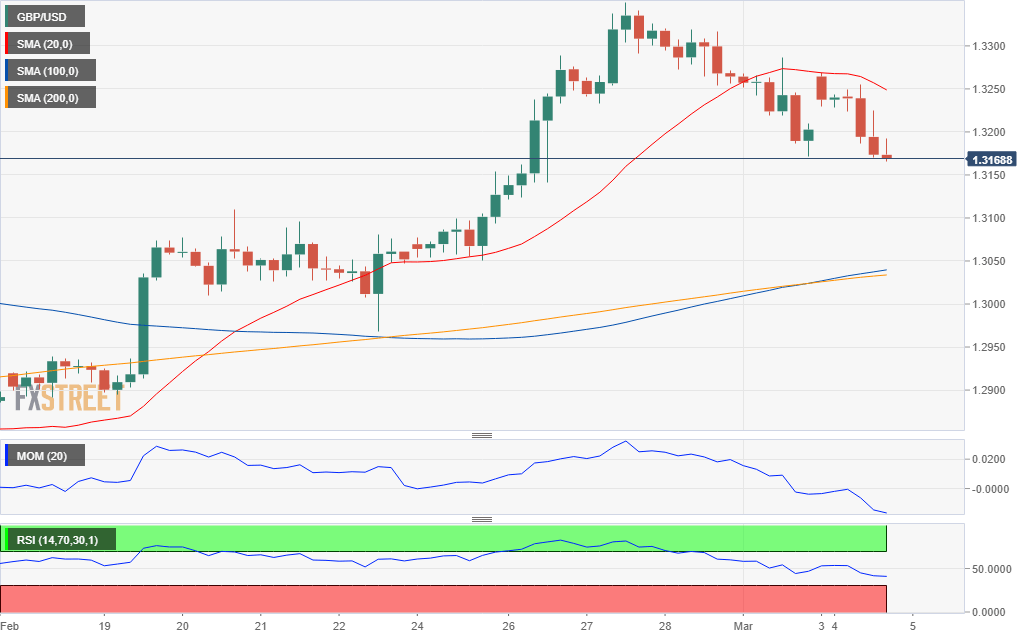 The GBP/USD pair fell for a third consecutive day, posting some modest losses when compared to Friday's close, as it settled below the 1.3200 figure. The Sterling started the week with a firmer tone as investors chose to dump the greenback following weekend news, although UK data put some weigh on it, as the Markit Construction PMI posted its first decline in almost a year, printing 49.5 in February from 50.6 in January. In the Brexit front, UK PM May's spokesman said that the government is still focused on leaving on March 29, and wants the Parliament to vote on a Brexit deal next week, on March 12, adding that anyway, "more work needs to be done," when talking about negotiations with the EU. British Brexit Secretary Barclay and Attorney General Cox will be traveling to Brussels on Tuesday for talks with the European Union's Chief Brexit negotiator Michel Barnier, while the macroeconomic calendar will offer the BRC survey on sales and Markit will release the February services PMI for the kingdom, foreseen at 49.9 vs. the previous 50.1.

The pair has posted a lower low and a lower high for a third consecutive day, breaking also, below the 38.2% retracement of its latest bullish run at around 1.3200, all of which skews the risk to the downside. Shorter term, and according to the 4 hours chart, chances of a downward extension are high, as the 20 SMA gains downward traction above the current level, while technical indicators barely pared their declines near oversold levels, with no signs of downward exhaustion. The 50% retracement of the mentioned rally comes at 1.3160, with a break below the level opening doors for an extension toward the 1.3100 region.