The Dollar has seen modest weakness in quiet early-week trading. Volumes are likely to remain on the low side today with US markets closed for the Martin Luther King holiday.

Stock markets in Asia remained buoyant after bellwether indices in the US and Europe hit record highs (again) on Friday. Mostly upbeat earnings, reduced trade uncertainty and, more fundamentally, accommodative central banks (the Fed’s capping of repo rates is of particular note, which has swelled its balance sheet by 11% since last September) along with a persisting benign inflationary picture, have been maintaining the bull run on global stock markets.

EURUSD steadied after dropping over the last two days of last week, which left a 10-day low at 1.1085. Earlier, German PPI inflation ended 2019 at -0.2% y/y, up from -0.7% y/y in November and in fact a tad higher than anticipated. However, the uptick was mainly due to the fact that negative base effects from energy prices fell out of the equation, which was already evident in HICP readings and thus the PPI number doesn’t change the overall outlook. Inflation remains too low for the ECB’s liking and both the definition of the benchmark inflation rate and the target itself are set to the part of the ECB’s strategic policy overhaul that is set to start in earnest this week. EURUSD is once again testing the 1.1085 and the key 61.8 Fibonacci level at 1.1079, and S1 sits at 1.1070 and the December/November low 1.0980. 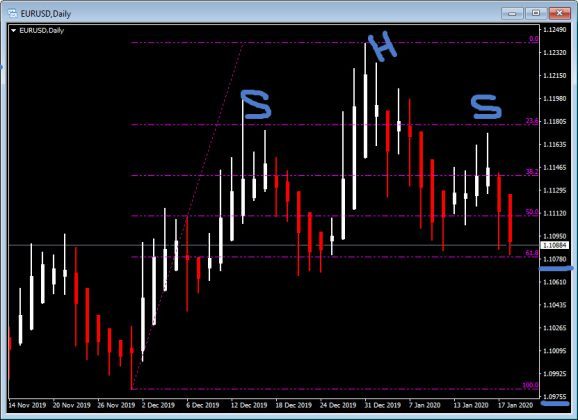 USDJPY went into narrow-range mode, posting just less than a 15-pip range in Asia through to the open of the London interbank market. Cable edged out a five-day low at 1.2985, and EURGBP lifted above its Friday peak in making a high at 0.8456. The possibility of the BoE cutting rates at its MPC meeting this Thursday should keep the Pound under pressure. The UK finance minister remarked over the weekend to the Financial Times that the UK would not be a “ruletaker” after Brexit, urging businesses to “adjust”. This has been taken negatively by businesses and has also weighed on Sterling today. USDCAD ebbed fractionally lower, to a 1.3055 low, which is near the midway point of the range seen over the last week.

Oil prices rallied at the opening of trading today, which sent front-month USOil to an 11-day high at $59.66. Reports that two large production sites in Libya closed in the face of military blockades (the country is amid a long-running civil war) underpinned prices. This was ahead of the Libya Conference in Paris at the weekend and seen as muscle flexing by the main opposition group. Elsewhere, AUDUSD recouped nearly half of the decline seen on Friday in carving out a high at 0.6888. The Aussie Dollar on Friday printed a 10-day low at 0.6871. RBA money markets positioning has continued to imply a 56% probability for the RBA trimming the cash rate by 25 bp at its February-4 policy meeting, unchanged since last Thursday.