Germany’s economy stagnated in Q4 last year, in line with a number of forecasts and a tad below consensus expectations, which had predicted a slight expansion of 0.1% q/q. Compared to negative quarterly prints in France and Italy, Germany is already the outperformer among the three big Eurozone countries and Q3 numbers for Germany were revised up to 0.2% from 0.1% reported initially. This left the working day adjusted annual rate 0.4% y/y a tad higher than anticipated, but down from 1.1% y/y in Q3. There is no full breakdown yet, but the stats office reported that private as well as public consumption slowed in the last quarter of 2019, while investment was mixed with construction investment, expanding again. Exports contracted, while imports picked up according to first estimate. Looking ahead, exports are likely to continue to suffer and orders numbers are predicting another weak quarter for manufacturing, which leaves the risk that the labour market will start to suffer. The balance of risks clearly is tilted to the downside not just for Germany’s economy.

The Euro posted fresh lows against the Dollar and other currencies, while both the safe haven Yen and Swiss franc lost yesterday’s bid as the daily increment of new coronavirus cases in China fell back alongside narratives that are downplaying yesterday’s jump in total reported cases in Hubei province as being just a reclassification. EURUSD posted a fresh 34-month low at 1.08265, and is set for its biggest two-week loss since July 2019. Today, the German GDP helped lift it to 1.0840 with the broader GDP data for the wider Eurozone yet to come. EURJPY printed a four-month low, at 118.86, and EURCHF a near-five-year-low, at 1.0609. EURGBP yesterday saw a two-month low below at 0.8295. 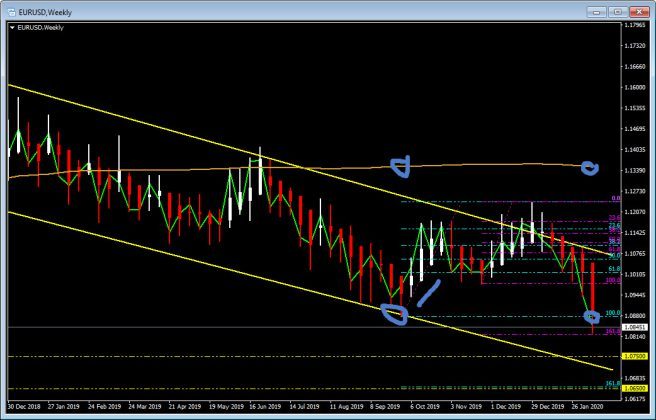