Global stocks were mixed today as the earnings season continued and as China moved to ease fears on Wall Street as its crackdown continued. In the UK, Lloyds Bank reported strong quarterly results and resumed paying dividends. The company also said that it will spend 390 million pounds to acquire Embark, a company with more than 410,000 customers and 35 billion in assets under administration. Meanwhile, Anglo American recorded strong half-year results and promised to return $4.1 billion to shareholders. It made a pre-tax profit of more than $10.1 billion as commodity prices rose. Other global companies like Facebook, Alphabet, and Microsoft released strong results this quarter.

China moved to calm markets after its crackdown on tech intensified. The country’s securities regulator held a call with key executives from companies like Goldman Sachs, JP Morgan, Fidelity and Blackrock. The call sought to reassure these entities that the country remained open for business. This happened after the country issued a ban on the private tutoring industry and intensified its focus on key firms like DiDi, Alibaba, and Tencent. Meanwhile, according to the WSJ, DiDi is considering going private less than a month after it raised $4.4 billion in its IPO. The company is talking with investors and other advisors as it tries to placate Beijing authorities. Later today, Robinhood will start trading in New York.

The US dollar weakness continued after the Federal Reserve delivered its interest rate decision. The bank left interest rates unchanged and hinted that it will start tapering its asset purchases in 2022. Data published today revealed that the US economy did well in the second quarter as the country reopened. The economy expanded by 6.5% in the quarter helped by robust consumer spending. Elsewhere, in the Eurozone, industrial and consumer confidence retreated in July. In the UK, mortgage approvals declined to 81.34k while the total lending rose to more than 17 billion pounds.

The EURUSD pair rose to a high of 1.1875, which was the highest level since July 14. On the hourly chart, the pair managed to move above the 25-day moving average and is slightly below the upper side of the Bollinger Bands. Oscillators like the MACD and Relative Strength Index (RSI) have kept rising. Therefore, the pair will likely keep rising with the next key level to watch being 1.1950. 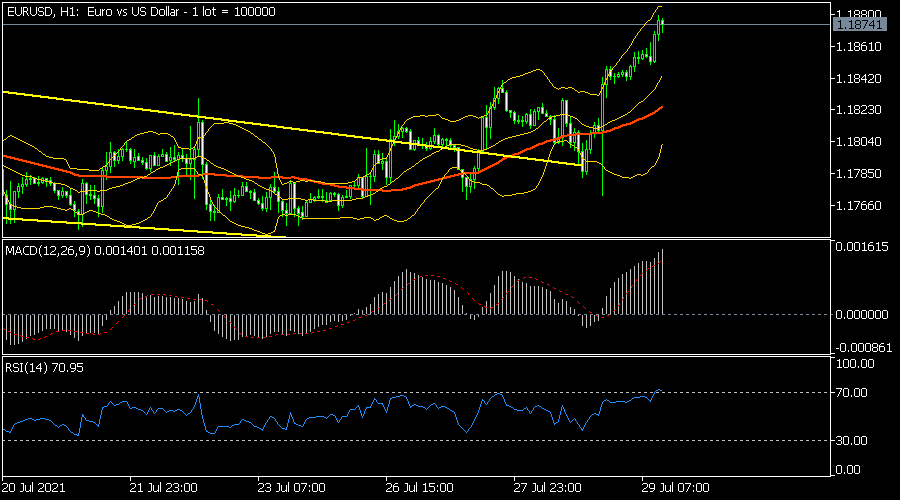 The USDCHF pair declined sharply after the Fed decision. The pair fell to 0.9080, which was the lowest level since June 18. On the four-hour chart, the pair moved below the 50% Fibonacci retracement level while the Relative Strength Index (RSI) dropped to 30. It also moved below the 25-day moving average and the neckline of the double-bottom at 0.9132. Therefore, the pair will likely maintain the bearish trend, with the next key level being at 0.9000.

The FTSE 100 index rose above a key resistance level after the latest earnings by companies like Anglo American and Lloyds. The index rose above £7,030, which was the highest level on July 26. On the four-hour chart, the index is trading at the 61.8% Fibonacci retracement level. It also moved above the 25-day moving average while the signal and main lines of the MACD moved above the neutral level. Therefore, the path of least resistance for the index is higher, with the next target being at £7,100.