For a moment after the FOMC statement it seemed that clarity of the hazy central bank variety had surfaced at the Federal Reserve.

This sentence was added to the policy announcement, " Since then, the economy has made progress toward these goals, and the Committee will continue to assess progress in coming meetings."

Was this the signal that the Fed had crossed the threshold and was now actively planning the withdrawal of monetary support? Would Chair Jerome Powell elaborate on the criteria for curbing and then ending the $120 billion of monthly asset purchases?

Treasury rates rose modestly, as did the dollar. Equities jumped with the Dow halving its small losses. Then everyone settled in to wait for Mr Powell's exegesis. 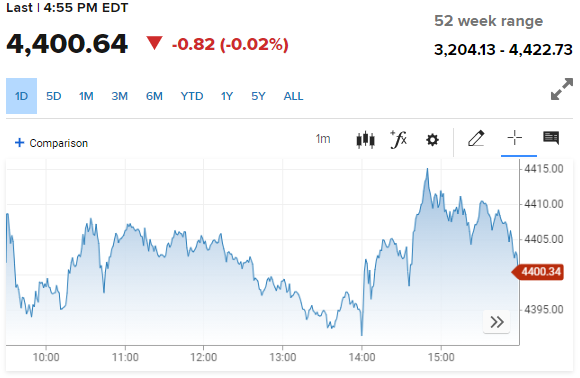 At the end of the Fed's two-day meeting the governors voted unanimously to keep the fed funds upper target at 0.25%, where it has been since last March, and to continue purchasing $120 billion of Treasuries and mortgage-backed securities.

“With progress on vaccinations and strong policy support, indicators of economic activity and employment have continued to strengthen. The sectors most adversely affected by the pandemic have shown improvement but have not fully recovered. Inflation has risen, largely reflecting transitory factors,” the statement said.

The endgame for the Fed's twin policy goals of full employment and price stability remained the achievement of "substantial further progress."

Despite unmistakable progress the US is beset with the unusual residue of the lockdowns and conflicting economic signals.

Growth this year has a very good chance of being the strongest in a generation. Gross domestic product (GDP), the most expansive measure of economic activity, expanded 6.4% in the first quarter and is forecast to soar to 8.4% in the second  when reported on Friday.

Nonfarm Payrolls added 850,000 positions in June, far more than the 700,000 prediction. The July estimate has climbed to 926,000, which would be the largest jump since last August. Yet, even with the projected hiring, payrolls are still between five and seven million less than they were at the end of 2019.

The Job Openings and Labor Turnover Survey listed 9.2 million unfilled positions in May, the largest on record. These openings coexist with a 5.9% unemployment rate and 419,000 unemployment insurance filings and 3.2 million continuing claims in the latest week.

The Consumer Price Index (CPI) has more than tripled in six months from 1.4% in January to 5.4% in June. Even the Fed's preferred Personal Consumption Expenditure Price Index (PCE) has more than doubled from 1.5% in January to 3.4% in May. It is expected to rise to 3.7% in June when it is released by the Bureau of Economic Analysis on Friday. If accurate, it would be the highest core inflation rate  in more than three decades, since March 1991.

The spread of the Delta variant has prompted concerns, probably exaggerated, that the US could be forced back into economically devastating closures. At the least it may keep some people from returning to work, or resuming their normal activities.

Last month’s FOMC meeting was marked by hefty improvements to its own economic projections.. The Fed's GDP estimate rose to 7%, up from 6.5% in March. Headline PCE ran to 3.4% from 2.4% and core PCE jumped to 3% from 2.2%

Mr. Powell’s expert verbal skills were on full display and despite many astute questions from reporters, after an hour, the policy narrative had hardly advanced beyond where it concluded in June.

On inflation, the economy, the recent fall in Treasury yields, or the FOMC taper discussion, the Fed position was unaltered.  Or to put it more accurately, whatever substantive changes have occurred in the Fed’s private discussion, that is where they remain.

In Mr. Powell’s own words:

Yes, inflation is much higher than we expected, but it is transitory and will diminish over time. If it does not we will act and we have the tools to bring it back down.

“It's things like cars, you know, new, used and rental cars have moved up in price because of the car shortage because of the semiconductor shortage.  And housing -- sorry, hotels and airfares have moved back up but that's retracing the downward movement in prices they had before.  That's a big, big part of why the inflation readings are so high.  Those frankly don't carry significant implementations in the long run for inflation or for the American economy.”

“So we think that inflation should move down over time. Now, we don't have any -- much confidence let's say, in the timing of that or the size of the effects in the near term. I would say in the near term the risks to inflation are probably to the upside."

"There's absolutely no sense of panic, I've explained several times here today by best estimate is this is something that will pass. It's really a shock to the economy that we'll pass through."

"Today I've given you what I can give you because this was the first really, I would say, deep dive on the issues of time and pace and composition and it was a good meeting. No decisions were made.”

“I'm just not in a position to give you much guidance, really any guidance on the actual timing. But I will say, we're making progress. We expect further progress. And we expect that if things go well then we will reach that goal. When we reach it and the committee is comfortable that we have reached it, then we'll taper at that point."

“A number of participants raised that question around MBS [mortgage back securities, $40 billion in Fed purchases per month] and tapering at today's meeting as a matter of fact.  And yesterday's meeting.  And I'll just say that generally speaking, I don't think and I don't think that -- I think the Treasury and MBS purchases affect financial conditions in very similar ways.  There may be modest differences in terms of contribution to housing prices, but it's not something that's big.  So where I think we are is there really is little support for the idea of tapering MBS earlier than treasuries.  I think we'll taper them at the same time, it seems likely based on where people are now.”

“Well, so in terms of what's been happening in bond markets, I don't think there's a real consensus on what explains the moves between the last meeting and this meeting.  We've seen the long-term yields go down significantly.  Some of it is a fall in real yields, which may have been connected to some -- connected to sentiment around the spread of the delta variant, concern about growth.”

In referring to the decline in bond yields since the last FOMC meeting there was even humor (central bank variety).

"And [then] there are so-called technical factors, which is where you put things you can't quite explain."

“It's an important feature of this recovery is how uneven it is.  In many cases it's related to the fact that some companies have had little access to vaccines and they're seeing significant outbreaks.  Other countries such as the United States in particular are having a very strong rebound.”

“A stronger global economy will lead to more U.S. exports and, you know, that will help economic activity.  To the extent the global economy is weak and the United States is strong, it will wind up, you know, exporting some of our demand through imports rather than having a lot of exports.”

"We have not reached substantial further progress yet, so we're not there."

“So wages have moved up.  A lot of that is driven by new hires and a lot of it is driven at low paid jobs in the service industries as people come back.  So that's not troubling.  And we don't see -- there is a form of wage inflation that can lead to price inflation.  We're not seeing that right now.”

"Factors related to the pandemic, such as caregiving needs, ongoing fears of the virus, and unemployment insurance payments appear to be weighing on employment growth. These factors should wane in coming months leading to strong gains in employment. "

"Maximum employment, there isn't a single number that we can target. We monitor a broad range of data, different aspects of the labor market. There is unemployment among different age groups and such. There's participation, there's wages, there's all kinds of flow data. "

Mr Powell gave a virtuoso performance that in the end changed nothing. Exactly as intended.

The US appears to be performing well but the cross-currents and unknowns are many and affect almost all areas of the economy.

Alan Greenspan must be proud.