That concerns about a global economic slowdown had made policymakers worldwide take a dovish shift is no news. Neither is that the financial market has already priced in at least one rate cut in the US for this year. In fact, the US Federal Reserve took the lead into shifting toward a more conservative approach to rate hikes, later followed by most of its counterparts.

Just this Tuesday, ECB's head, Mario Draghi, announced that if inflation doesn't pick up the central bank will use its tools, included rate cuts, to stimulate the economy. Powell & Co. are expected to pave the way for a cut and to announce it this Wednesday when they end their two-day meeting. There is a “but” in the way. US data have been resilient, particularly that related to consumption, which means that policymakers could decide to remain 'patient' for a bit longer. Given the current scenario, that will be as close as “hawkish” they could get these days.

The US economy is not giving signs of the economic slowdown, but inflation is indeed below desired, and also true that the yield curve has been dangerously close to inverting. Furthermore, and despite Powell keeps proclaiming the independence of the central bank, US President Trump pressures all he can for lower rates, as he considers that higher rates in the US give an advantage to its trading counterparts. Just this Tuesday, Trump tweeted: “Mario Draghi just announced more stimulus could come, which immediately dropped the Euro against the Dollar, making it unfairly easier for them to compete against the USA. They have been getting away with this for years, along with China and others.” To conduct his trade war, Trump needs lower rates.

The big question is whether Fed officials consider its time to do it, or if they can wait to gather more data before dropping the rate-cut bomb. By the end of last week, odds for a rate cut next July were of about 80%, and a clear sign toward such a move will be Fed officials dropping 'patient' from the statement. If that's not the case, the greenback could get a nice boost, although Wall Street will probably suffer. Market's eyes will also be on the dot-plot and any change there.

Anyway, if the US Federal Reserve decides to maintain the status quo this month, that doesn't take a rate cut out of the table. After the dust settles, the market will start pricing in a probable cut for September.

The EUR/USD pair trades at its lowest in over two weeks heading into the event, undermined by Draghi's comments about European policymakers' determination to act with more stimulus if needed. The pair has breached a significant support, now resistance at 1.1200, as the level stands for the 61.8% retracement of the latest daily advance. An intermediate support ahead of the event comes at the 1.1150/60 price zone, followed by the yearly low at 1.1106. Quite unlikely, but if this last gives up, the 1.1000 figure will become a more likely target. Resistances come at the mentioned Fibonacci level at 1.1200, followed by the 1.1240/60 price zone. Above this last, the short-term scenario will turn bullish for EUR/USD. 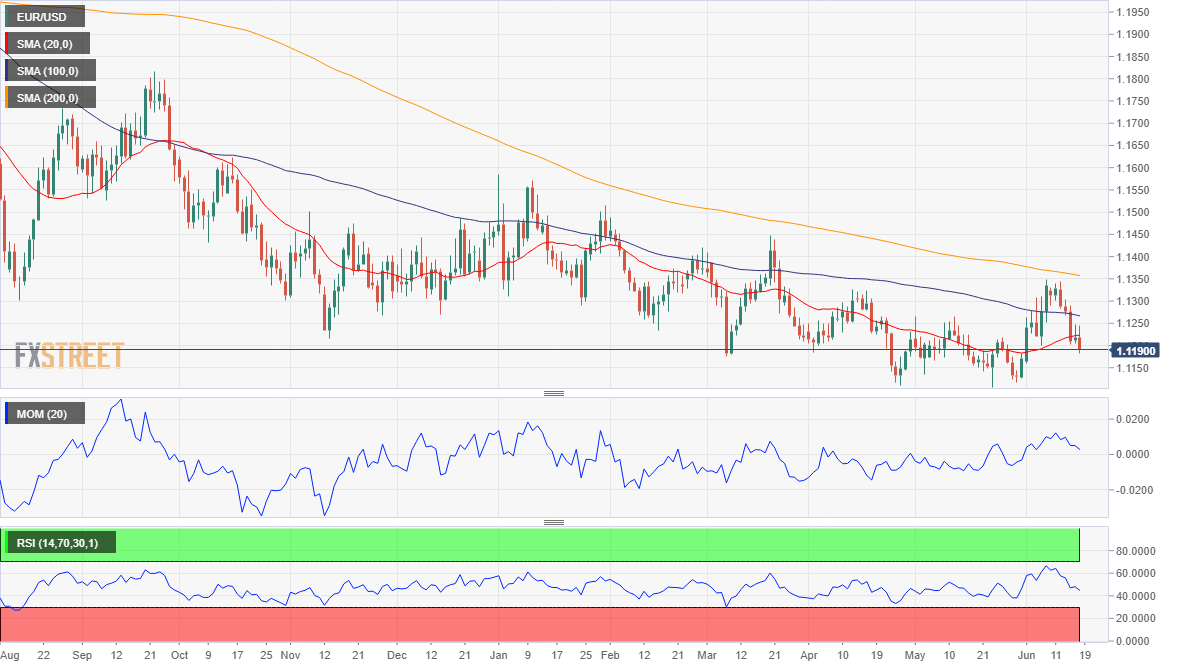