Can a fast-growing US economy replace its pandemic labor casualties without triggering a response from the Federal Reserve? Or to put it another way, will accelerating economic growth encourage the governors to pull back on bond purchases, implicitly permitting Treasury and commercial rates to rise? 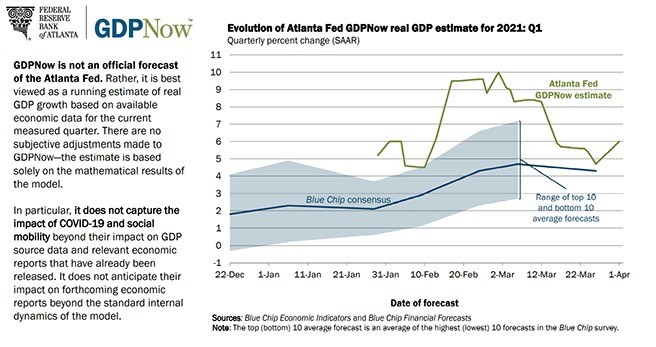 The American economy has recovered quickly from the December and January lockdown induced swoon with businesses and consumers emboldened by the apparent success of the vaccination campaign.

New payroll hires quadrupled in three months from 233,000 in January to 916,000 in March. At the job creation rate of the first quarter all pandemic losses would be made good by the end of the summer.

Business optimism in manufacturing  reached a 38-year high in March. In the dominant service sector managers’ outlook jumped to an all-time record

For consumers, the impact of the March job number on sentiment was evident before the payroll report as the Conference Board and Michigan readings made large and unexpected gains.

Washington’s latest $1400 individual stipend reached most consumers in March. At more than double the December award that produced January's 7.6% burst in Retail Sales, this grant is expected to produce a second, smaller, 4.4% jolt in consumption.

American equities are setting new highs every other day it seems. The dollar has executed a New Year’s reversal against all majors except the Canadian dollar whose resource-based and US-tied economy will partake of the US good fortune.

So far, the swift first quarter recovery has been all the Fed could hope for and, according to most estimates including its own, the expansion will continue through the rest of the year.

Inflation, however, remains an uncertainty as does the correct policy response.

Inflation and the Fed

Thus far price gains have been limited to the Producer Price Index (PPI) which rose 0.5% on the month and 2.8% on the year in February. The annual rate is expected to jump to 3.8% in March when it is released on April 9.

The Consumer Price Index  (CPI) increased 0.4% (MoM) and 1.7% (YoY) in February, rates that are predicted to be unchanged when the March figures are issued on April 13.

Finally, the Personal Consumption Expenditure Price Index (PCE), the Fed’s elected measure, was 0.2% monthly and 1.6% annually in February after 0.3% and 1.4% in January. The Match data will be released April 30.

Federal Reserve Chairman Jerome Powell has said that the bank expects any price increases to be temporary and largely due to the base effect of the sharp pandemic declines last spring..

It is correct that all three price gauges had steep declines in the first three months of the pandemic last year. For Instance the PCE Price Index dropped from 1.8% in February to 1.3% in March, and 0.5% in April and May. The return of prices to normal inflation rates this year will produce an exaggerated percentage gain in the 2021 comparison. That effect diminishes as the rates normalize.

But the base effect is not the sole inflation concern, though it is the only one documented so far.

Several other factors make a more systemic increase in inflation plausible, if not certain.

First is the enormous amount of money that Washington has and is planning to pump into the economy. The last two stimulus bills totaled over $3 trillion and the Biden administration is asking Congress to match that within the next few months.

Second, demand will likely surge as people return to work and shake off the restraints of the past year. The pandemic relief will almost assuredly find expression in consumer spending.

Lastly, the pandemic has left bottlenecks, backlogs and limited supply for many consumer items. It is unknown whether shortages in the coming months will prompt enough price increases to affect the inflation rate but it is a possibility.

Countering the Fed's previous, more immediate approach to price increases is the recent adoption of inflation averaging. This policy permits the FOMC to let price gains run ahead of the 2% goal for as long as needed to bring the average rate to that target. In effect, this delayed response removes the credit markets speculative rate trigger.

The Fed has made it clear that it no longer follows a reactive inflation policy and that price changes are not at the center of its considerations.

Economic growth and employment are the bank’s focus and the rationale for keeping short-term rates near their historical lows.

Even though the fed funds rate is unchanged by the Fed’s own estimates through the end of 2023, that does not mean the $120 billion each month in bond purchases has the same expected longevity.

Markets anticipate that as US economic growth accelerates the Fed will reduce and eventually end its bond program. That expectation is one of the chief reasons behind the steepening of the Treasury yield curve this year.

The FOMC minutes will be scoured for clues to the logic, timing, and size of any change to the Treasury intervention.

Any discussion of the conditions neeeded for a reduction in bond purchases will be taken as indication that the time is approaching.  Treasury yields and the dollar will act accordingly.