The data flow keeps coming—July housing starts and permits, the University of Michigan consumer confidence—but what most folks will be watching is the rate outlook for the September 18 FOMC. There we have a terrible, horrible disconnect of rate expectations vs. the real economy. As retail sales just demonstrated, the US economy is okay. Not 3.5-5% great, but okay. Core inflation is up at 2.2% and golly, the Atlanta Fed just forecast Q3 at the same 2.2% based on robust growth in “real personal consumption expenditures from 2.7 percent to 3.4 percent after this morning’s retail sales release.” 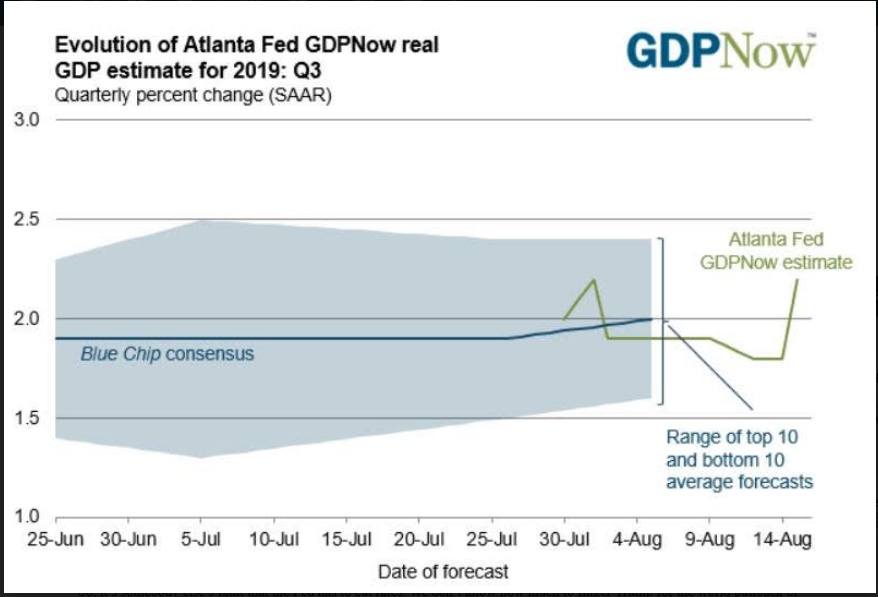 Trump likes to blame anyone but himself. Now the Fed has the same opportunity—it’s not the US economy in the soup, it’s everybody else. Therefore a 50 bp cut in September would not be silly, nor necessarily attract charges of political interference. The CME FedWatch chart has zero probability of rates remaining the same at the next FOMC, with one cut at 71.9% as of this morning.

Even Moody’s Analytics says “Prudent risk management would argue for a cut in September because of the downside risks from trade policy and a slowing global economy.” Another voice cited by Bloomberg is Jeffries: “The Fed can’t just worry about domestic conditions. After 30 years of globalization, the Fed can’t go off on its own and has to worry about global conditions. There is reasonable concern about the global economy and the health of financial markets.’’A Wells Fargo economist concurs--“They have to be thinking about how may a global recession impact the U.S. economy and do lower negative yields elsewhere take our comparable U.S. yields down with it.’’ Bank of America chimes in: “Based on what Jay Powell said in July, they’re not necessarily looking at current data as much as expectations for future data. In the past few weeks we’ve definitely seen more risk to the global outlook with a slowdown in global growth and trade concerns.’’

So, it’s somebody else’s fault that the Fed has to cut rates. We don’t know how much to finger Trump for the world pullback or possibly recession. Maybe it was going to come, anyway, regardless of trade war. We don’t buy this idea, but never mind. The point remains that Fed rate cuts, even a Shock like 50 bp, does not necessarily harm the dollar when others have worse economies and negative returns. The FX market does not punish stupid and incompetent American presidents.

Next week might be as interesting as this week. We get the eurozone flash PMI, the ECB policy meeting, the vote of no-confidence in Italy, and G7 summit (August 24–26) in Biarritz, France. And almost certainly something from the White House. The problem with drama and markets reacting hysterically is that panic is so tiring. We could all just collapse in an exhausted heap next week. But at a guess, Mr. Draghi is going to leave a farewell gift to his successor. That could spark a renewal of confidence and a bump in the euro. But don’t count on it.

Tidbit: Trump came in for scorn when he repeated he wants to buy Greenland from Denmark and the WSJ picked it up. This has been an enduring preoccupation for Trump for years, despite most people except a few nutcases seeing the suggestion as a prank on Trump to reveal his delusional viewpoints. That’s how Denmark see it, saying it has to be an April Fool’s joke. A former party spokesman said “If he is truly contemplating this, then this is final proof, that he has gone mad. The thought of Denmark selling 50,000 citizens to the United States is completely ridiculous.” For its part, Greenland said no thanks, opening laughing at Trump.

Well, Denmark sold the US what are now the Virgin Islands in 1917 and have a military agreement from 1951 that allows a giant Air Force base in Thule. Greenland may be costly for Denmark to subsidize but this idea is “grotesque.”