In the Eurozone, confidence data over the past week showed some signs of stabilisation, the latest being today’s November ESI survey, in the manufacturing sector, but the outlook remains fragile. Eurozone ESI economic confidence higher than expected at 101.3, up from 100.8 in the previous month and versus Bloomberg consensus for a reading of 101.0.

In contrast to the PMI survey, the ESI showed improvements in both manufacturing and services sentiment, with the former lifting to a still negative -9.2 from -9.5 in October. So a broad improvement in sentiment that suggests modest, but still positive growth in the last quarter of the year. At the same time, the latest PMI reports raised the risk that the weakness is spreading to the services sector. Hence, the balance of risks remains tilted to the downside, with Central Bank keeping an easing bias with view to external risks from Brexit and US-China trade talks.

Meanwhile, the largest European economy today, posted mixed inflation data, as the german state CPI slightly weaker than expected, with headline rates only accelerating in 2 of the 6 states that have released numbers already. However the German HICP inflation accelerated to 1.2% y/y in the preliminary reading for November, in line with expectations and versus 0.9% y/y in the previous month. The national CPI rate came in at 1.1% y/y, a tad below forecast, but also up over the month.

Following the acceleration in the Spanish HICP rate to 0.5% y/y, the data leaves the overall Eurozone measure on track to move higher in November, although readings remain firmly below the ECB’s upper limit for price stability, which backs the central bank’s very accommodative policy stance.

In the currency market meanwhile, EURUSD has continued to see narrow ranges, holding above 1.1000 and yesterday’s two-week low at 1.0992. The low was seen following a batch of above-forecast US data, while the dampener was the fresh souring in relations between the US and China, which lifted EURUSD up to 1.1017 overnight prior the decline seen in the european session.

The pair remains in a neutral-to-bearish outlook The pair has been chopping around 1.1050 since early August, ranging from 1.0879 to 1.1179 over this period. The low marked a two-and-a-half year trough, the culmination of a bear trend that’s been unfolding since early 2018, from levels around 1.2500.

Momentum of this trend has been waning with the Fed having cut interest rates three times since late July, though markets have now priced out further Fed easing. The Fed’s measure of the Dollar’s broad trade-weighted dollar is at near 3-year highs. A continuation of Dollar firmness, would likely keep EURUSD’s bias to the downside.

US markets are closed today for the Thanksgiving holiday, which will be the start of a long “bridge” weekend for many market participants in the US. 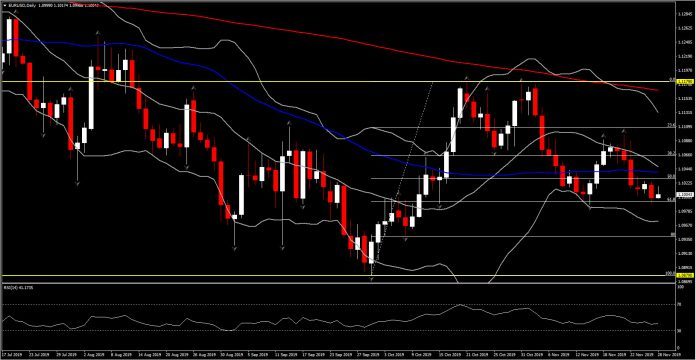 In contrast to USDCAD, EURCAD has posted yesterday it’s fifth day lower at 1.4587. So far today, gained some ground on the back of the in line European data and on the decline of USOIL amid risk-off sentiment and signs of softening global consumption. Oil prices were showing a loss over of over 1.5% from yesterday’s highs in early London trading.

The 5-day low EURCAD saw yesterday provides a downside focal point, while the PP at 1.4610 provides an immediate Support level for the day. Although the market has ticked higher today, it will be interesting to see how the bears will respond by the end of the day. The RSI has fallen to around 50, whilst MACD lines present decline of positive bias.

At prevailing levels, EURCAD is trading below the rising wedge seen since October 28. Therefore, the overall outlook remains negative, while a pullback below 1.4580 could reinforce decline up to 1.4460-1.4530 area.