The market didn’t miss volatility these days, but for EUR/USD, it doesn’t mean much, as the pair is ending the week with little changed around 1.1840. The American dollar appreciated throughout the first half of the week, in the heels of the momentum triggered by encouraging data released the previous Friday coupled with the absence of relevant macroeconomic news.

Currencies were led by sentiment, which in turn, was on the hands of Brexit headlines. Mounting tensions between the UK and the EU over their future trade relationship spurred risk-off, limiting the greenback’s bearish potential.

The shared currency got a vote of confidence from market players on Thursday, following the European Central Bank monetary policy meeting. As widely expected, the ECB left rates and the PEPP unchanged, while growth and inflation outlooks for this year and the next ones suffered modest revisions. Nevertheless, President Lagarde offered an optimistic statement, referring to economic progress in the Union, although adding that an ample degree of accommodation is still needed. She also downplayed concerns over a stronger euro, fueling a EUR/USD rally to 1.1917.

Sentiment suffered another setback these days, as AstraZeneca and Oxford announced a pause in their coronavirus vaccine trials amid possible secondary effects in one participant. The vaccine is considered the front-runner in the global race but is not the only one showing progress. The latest on the matter indicates that the volunteer has already been released from the hospital and that trials will resume in the upcoming days.

It was exactly six months ago that the OMS declared the COVID-19 pandemic. ECB’s optimism was partially overshadowed by the rising number of cases in the Union, as this Thursday, there were roughly 40,000 new coronavirus cases in the Old Continent. However, less than 300 new deaths were reported. In the US, on the other hand, 38,800 new cases were reported as of yesterday, with over 1,000 deaths.

Focus shifts to the Federal Reserve

The dollar remains strong this Friday as US August inflation surprised to the upside, with the core annual reading surging to 1.7%. Worth noting that earlier in the week, the EU published the final version of its Q2 GDP, which was revised to -11.8% from -12.1%.

And after the ECB, the focus shifts to the US Federal Reserve. The US Central Bank is having a monetary policy meeting next Wednesday. It seems unlikely that Powell & Co. will come with with a surprise this time, particularly after announcing a shift in its monetary policy in the Jackson Hole Symposium. The Fed’s head announced that they would let inflation run above 2% without that meaning an immediate rate hike. By keeping rates near zero, the central bank aims to keep supporting the economy through these difficult times. There’s so much a central bank can do, and should not be a big surprise if Powell says so, passing the ball to the Congress, which remains incapable of moving forward with an aid package bill.

The US will also publish next week August Retail Sales, seen posting a modest 1.1% advance. Later in the week, the country will unveil the preliminary estimate of the Michigan Consumer Sentiment Index for September, expected at 76 from 74.1 in August.

In the Union, the macroeconomic calendar will include the German ZEW Survey, while the EU will publish August inflation figures.

As said, the EUR/USD pair is unchanged weekly basis, although it posted a lower low and a lower high, which somehow skews the risk to the downside, mainly if the pair remains unable to recover beyond 1.1900. In the mentioned time frame, the pair keeps developing above all of its moving averages, with the 20 SMA crossing above the larger ones. The Momentum indicator continues to retreat from its monthly highs, while the RSI is stable around 67. All in one, it doesn’t seem the dollar has room to appreciate, at least in the long-term.

Daily basis, the pair is neutral, now hovering around a flat 20 DMA, while far above the larger ones, which remain bullish. Technical indicators, in the meantime, are advancing just modestly within positive levels.

The pair is currently trading around the 38.2% retracement of its September decline, after topping mid-week around the 61.8% retracement of the same slump at 1.1910. Bulls may retake the lead once the pair breaks above this last, and point then to a test of this year tops at 1.2011. The weekly low at 1.1752 provides support, ahead of the 1.1680 price zone. 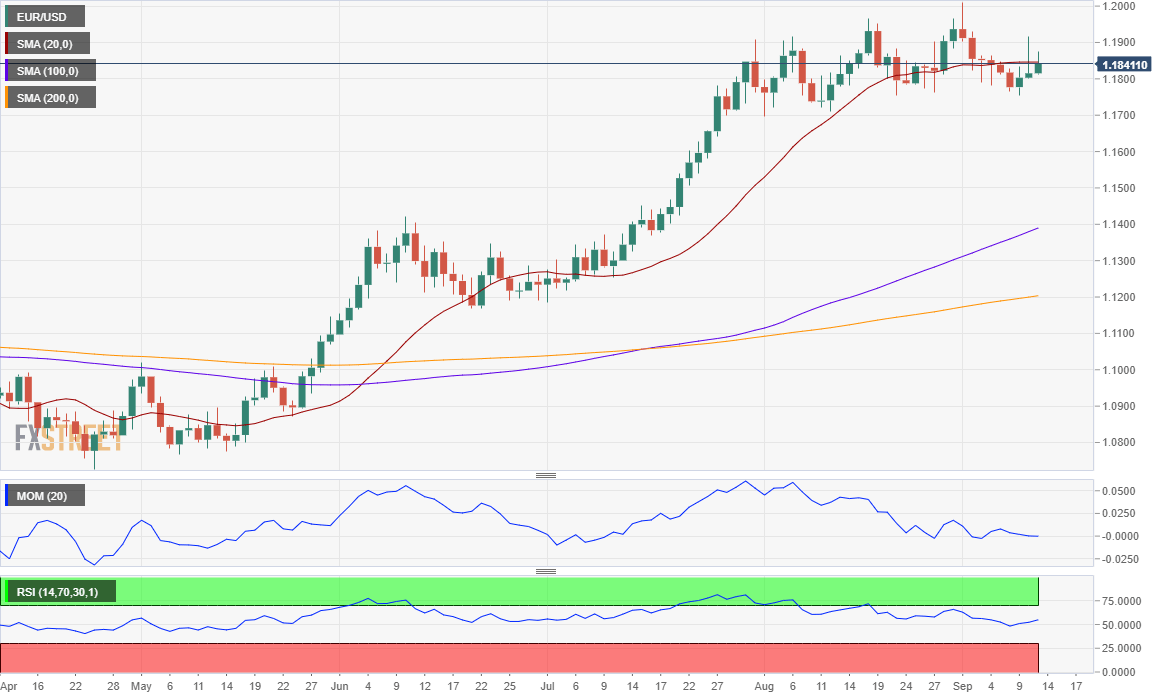 The greenback is seen mixed next week against its major rivals. Against the EUR, and according to the FXStreet Forecast Poll the pair is expected to remain neutral next week, with bulls and bears equally divided. Buyers surpass sellers in the monthly view,  but the neutral sentiment returns in the three-month view. In the three time-frame under study, the pair is seen holding above the 1.1800 level.

The Overview chart reflects the lack of directional strength, with the three moving averages flat. The number of possible targets is above the current level in the 1-month view, and below it in the quarterly one, somehow indicating that speculative interest still favors the dollar.