The American dollar was the biggest loser this week, plummeting against all of its major rivals. The EUR/USD pair advanced to 1.1890 retaining substantial gains at the end of the week. The engine was the US presidential election, the fuel was US President Trump.

The US went to the polls on Tuesday, yet Friday ends without certainties on who the 46th president will be.  The tight race will be defined by a couple of states, and probably by the Supreme Court, as Joe Biden leads, but President Trump has introduced several lawsuits claiming electoral fraud. Some of these demands have been already dismissed amid the absence of proves. Nevertheless, we are far from the end of this story that will probably retain the limelight in the upcoming days. At this time of the day, it seems that Joe Biden will be heading into the White House in 2021. The dollar slump is the result of investors pricing in a divided government.

Meanwhile, the pandemic keeps taking its toll globally. The US reached the sad record of reporting over 100K new coronavirus cases in one day. On Thursday, the world reported over 600K new contagions and roughly 8,700 deaths. Stocks rallied on election stalemate, but risk sentiment could soon suffer a U-turn, when the election is officially decided or when coronavirus figures and growth move back to the front-line. Whenever elections get defined, there’s a good chance that the country will finally get a second stimulus package.

In the middle, the US Federal Reserve announced its decision on monetary policy. As widely anticipated, the central bank left rates and the QE program unchanged. Chief Powell reiterated that they stand ready to do whatever it takes to sustain the economic recovery, yet also called again for fiscal support. He repeated the usual caveats related to the pandemic, suggesting that the latest economic comeback is still fragile and should not be taken for granted.

Economic indicators released this week were generally upbeat, but also indicated that the most relevant economies are far below pre-pandemic levels. The path to recovery is slow, and with the latest COVID-19 figures seems it will take even longer.

Markit published the final readings of its October PMIs, which were upwardly revised in the EU and the US. Still, services output remained in contraction territory in the Union throughout the month.  The US official ISM Manufacturing PMI improved to 59.3, while the Services PMI came in at 56.6, down from 57.8 in September.

In Europe, Retail Sales posted a modest 0.5% monthly advance and gained 2.2% YoY in September, well below the 4.2% added in August.

The US reported the October employment situation on Friday.  Nonfarm Payrolls were up 638K slightly better than anticipated, while the Unemployment Rate surprised by contracting to 6.9% from 7.9% as the Labor Force Participation Rate advanced to 61.7% from 61.4%. The news had quite a limited impact on price action.

The macroeconomic calendar turns light next week, as it includes no first-tier data. Germany will publish the November ZEW Survey on Tuesday and the economic sentiment is expected to improve.  Germany, the EU and the US will unveil the final readings of October inflation, while the EU will publish the second estimate of Q3 GDP.

The EUR/USD pair is trading at the upper end of its October range, pressuring but unable to break above the 1.1870/80 price zone. The weekly chart shows that the pair bounced from around a bullish 20 SMA, which has continued advancing beyond the larger ones. The Momentum indicator is bouncing from its midline but lacks enough strength to confirm additional gains ahead. The RSI indicator also turned higher, holding within familiar levels well into positive ground.

According to the daily chart, the pair has the risk skewed to the upside, as it’s extending gains above all of its moving averages, although the 20 DMA keeps lacking directional strength. The Momentum indicator is stuck to neutral levels, while the RSI aims north around  60. 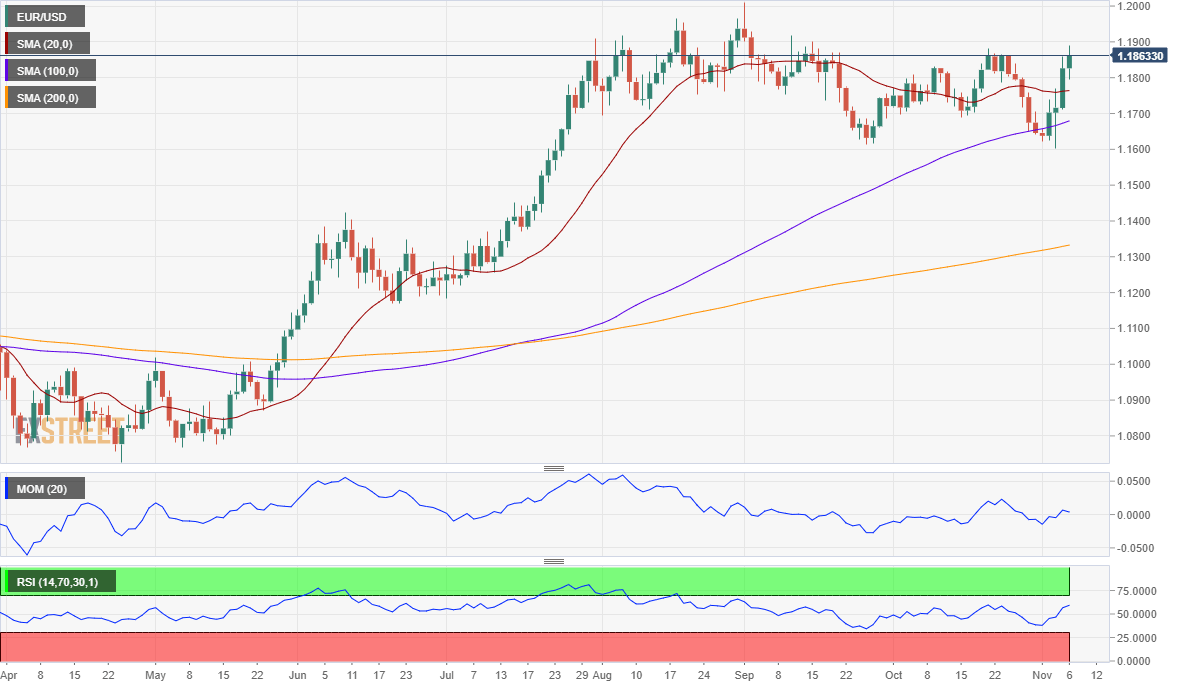 The FXStreet Forecast Poll suggests that the pair will spend next week consolidating, but also that it has chances of falling afterward,  as bears are a majority in the monthly perspective. The pair changes to bullish in the longer-term view as bulls surge to 46%. In the three time-frame under study, however, the pair is set to remain on average in the 1.18/1.19 price zone.

The Overview chart shows that the near-term moving average maintains a bullish slope, with the most possible targets at around 1.20. The monthly and quarterly moving averages continue to be flat. Although in the quarterly view, most targets accumulate above the current level.

AUD/USD fades an uptick above 0.7400 despite upbeat China's PMIs

AUD/USD pares gains and drops back below 0.7400 amid a cautious market mood, reflected by the losses in the S&P 500 futures. Australian-Sino trade tussle outweighs the vaccine optimism and upbeat Chinese NBS PMIs.