The EUR/USD pair trades in the red around 1.0170, down for the week, although still trapped in the 200-pip range set in mid-July. Market participants struggled to find a way amid menaces in both economies. Slowing economic progress and price pressures arose at the beginning of the third quarter, and monetary policies had a limited effect on them. But the dollar managed to gather upward momentum on Friday, as a solid US employment report temporarily spooked the recession’s ghost.

The US added 528K new jobs in July, according to the Nonfarm Payrolls report, while the unemployment rate shrank to 3.5%, beating expectations. The underemployment rate also came in better than anticipated, standing at 6.7%. The strong figures took off some of the pressure on US policymakers, which believe a soft landing is possible, but pretty much deny the economy is in a slowing process.

The Federal Reserve now has plenty of room to extend its aggressive tightening, moreover considering that multiple Fed officials have expressed concerns about overheating inflation this week. As a result, speculative interest has increased its bets for another 75 bps rate hike in September.

The European Central Bank, on the other hand, considers that a recession is unlikely for this year and the next, and sticks to its cautious tightening, another reason why EUR/USD remains close to a multi-decade low of 0.9951.

But what is the real risk of recessions? The US economy contracted for two quarters in a row, so technically, it is already there. Furthermore, investors maintain the Treasury yield curve inverted, hitting its peak inversion of 45 bps right after the NFP release.

And what about the EU? The region faces the worst energy crisis in its history, with prices soaring and adding pressure on already hot inflation amid supply-chain issues. The chaos extends potentially to food provision due to tensions with Ukraine. So far, EU data has shown mild growth through the first half of the year, but the upcoming winter will be tough for the region and will take its toll on the EUR.

Meanwhile, macroeconomic data released these past few days showed that the US is in better shape than the EU. German and EU Retail Sales fell into negative territory in June, while manufacturing output in the region stood in contraction territory in July. Services activity in Germany is also contracting, although for the whole EU is holding in expansionary territory.  Finally, Industrial Production and Factory Orders in the European most developed economy contracted on an annual basis in July.

US business activity, on the other hand, remained in expansion territory in July, according to the official ISM PMIs. Good news is that the prices paid contracted sharply, bad news is that new orders did the same. Also, Factory Orders rose by more than anticipated in June, up 2% MoM, while the Goods and Services Trade Balance in the same month posted a narrower-than-expected deficit of $79.6 billion.

Inflation will take centre stage next week as Germany will release the final estimates of its July Consumer Price Index, expected to confirm an increase of 7.5% YoY. The US will also publish July figures, with the CPI inflation foreseen easing from 9.1% to 8.7% YoY, but the annual core reading is expected to increase from 5.9% to 6.1% YoY.

The macroeconomic calendar will also include the July US Producer Price Index and the preliminary estimate of the August Michigan Consumer Sentiment Index. Finally, the Union will unveil August Sentix Investor Confidence and July Industrial Production.

The weekly chart shows that the long-term bearish stance remains intact. Technical indicators hold within negative levels, the Momentum advancing but the RSI extending its consolidation at around 31. At the same time, the 20 SMA heads south almost vertically, roughly 350 pips above the current level but over 800 pips below the longer ones, a sign of bears’ dominance.

The daily chart gives little clues as the EUR/USD pair moves back and forth within a limited range. A mildly bullish 20 SMA provides intraday support as, despite slides below it, the pair has been closing above it throughout the week. The 100 and 200 SMAs, on the other hand, head firmly south far above the current level.  Meanwhile, technical indicators have turned south early on the week and retain their bearish slopes, the Momentum around its 100 level and the RSI at around 44.

A break below 1.0105 will open the door for a retest of parity, while below the latter, fresh multi-decade lows could be expected, with the main bearish target at 0.9880. The immediate resistance comes at 1.0205, the 38.2% retracement of the aforementioned slump, although EUR/USD would need to accelerate through 1.0280 to shrug off the negative stance and extend its recovery towards 1.0360 first and en route to 1.0440 then. 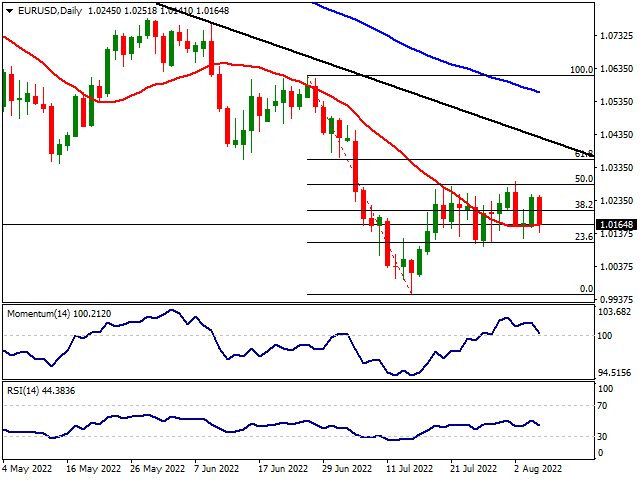