Currency pairs kept surfing yields’ waves, and the greenback was the overall winner. The EUR/USD pair is trading around the 1.1900 threshold, posting its worst weekly close for the year. Mounting speculation about an economic comeback and the subsequent higher inflation is behind the run in government debt rates. Simultaneously, the rally puts pressure on borrowing costs, which may delay the economic recovery.

Central banks are taking different stances on soaring yields. On Wednesday, the US Federal Reserve had a monetary policy meeting, and policymakers maintained the current policy unchanged, as widely anticipated. However, chair Jerome Powell´s remarks shed some light on the future of rates.

The dot plot showed that more voting members foresee chances of rate hikes in 2022 and 2023, although the number is still too low to boost chances of an actual hike. In fact, Powell’s words were mostly dovish. Even though he acknowledged a better economic performance, he reiterated that substantial progress is needed. Powell also said that he expects higher inflation this year, but only temporarily, and repeated that there is a long way ahead to recover to the pre-pandemic employment levels. The job sector needs to recover roughly 9.5 million positions, Powell remarked.

The European Central Bank announced it would ramp up bond-buying to tackle surging yields in the previous week. The Fed and the ECB announcements had one thing in common. Both were good enough to cool yields, but only for a short span of time.

US government bond yields roared higher on Thursday, with the yield on the 10-year Treasury note hitting 1.75%, heading into the weekly close at around 1.73%.

US macroeconomic figures fell short of the market’s expectations. February Retail Sales fell by 3% in the month and 3.5% YoY, while Initial Jobless Claims for the week ended March 12 printed at 770K, much worse than the 700K expected. Building Permits and Housing Starts fell by over 10% each in February, while Industrial Production shrank by 2.2% in February.

EU data was mixed. The German ZEW Survey showed that the Economic Sentiment improved in the country and the Union in March, although EU inflation-related figures disappointed.

US Federal Reserve chief Jerome Powell will be on the wires multiple times next week, although he is not expected to say something different to what he already did.

On Wednesday, Markit will publish the preliminary estimates of its March  PMIs. Manufacturing output is foreseen contracting in the EU, while the services sector is expected to have bounced modestly. In the US, both readings are seen below February final figures but within expansion levels.

The US will release February Durable Goods Orders, expected to have grown by 1.2% in the month. The country will publish the final version of its Q4 Gross Domestic Product on Thursday. The most relevant European data is the preliminary estimate of March Consumer Confidence, seen deteriorating from -14.8 to -15. Germany will publish the April GFK Consumer Confidence Survey, also seen contracting to -14.4 from -12.9.

From a technical point of view, the EUR/USD pair is bearish. It is trading around 1.1885, the 61.8% retracement of its November/January rally, after failing to advance beyond the 50% retracement of the same run.

In the weekly chart, EUR/USD remains below its 20 SMA, while the longer one lack directional strength well below the current level. Meanwhile, technical indicators maintain their bearish slopes well into negative levels.

On a daily basis, the risk is also skewed to the downside as the 20 SMA has extended its decline below the 100 SMA, both above the current level. The 200 SMA is flat around 1.1840, while technical indicators hover directionless within negative levels. 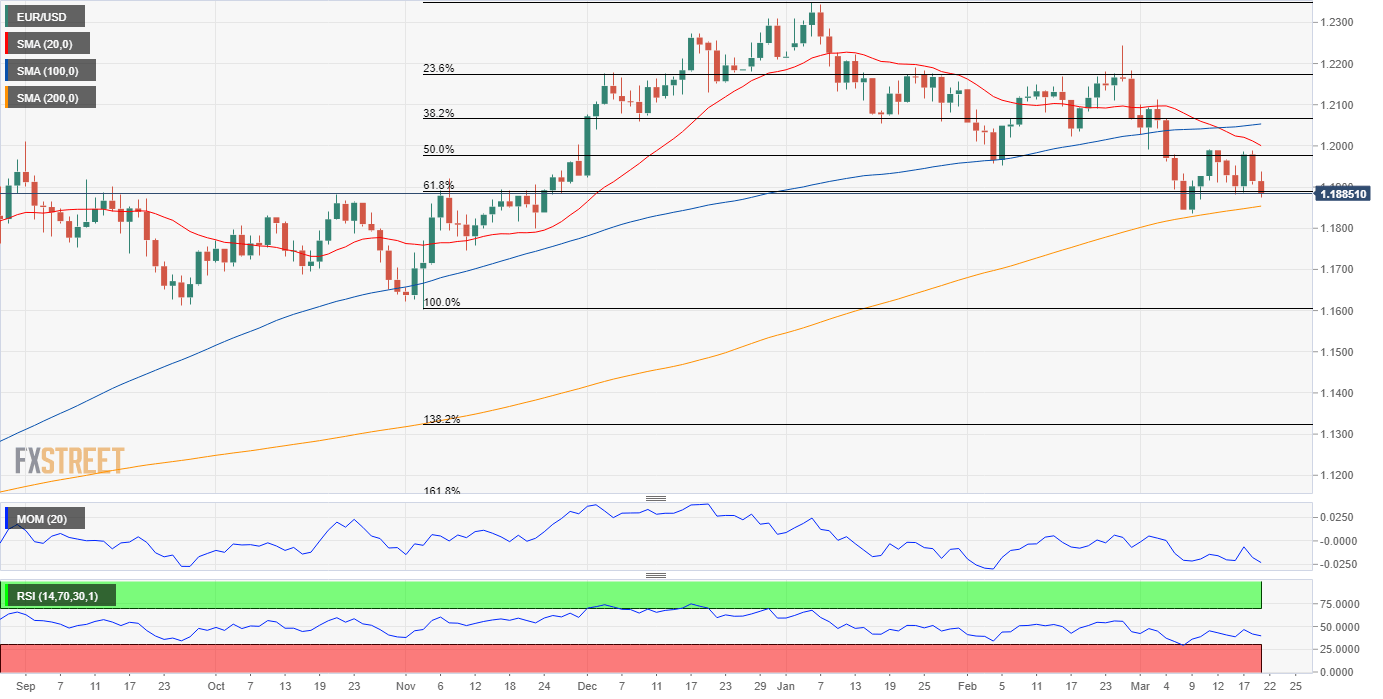 According to the FXStreet Forecast Poll, the EUR/USD pair will remain under pressure in the near-term but later recover it. In the weekly view, bears stand for 75% of the polled experts, which see the pair on average around 1.1833. EUR/USD is seen back above 1.20 from there,  but without follow-through beyond the figure.

The Overview chart, however, puts at doubt a possible recovery. The shorter moving average heads firmly lower with most targets below the current level In the monthly view, some exceptionally higher targets lift the average, although the pair is mostly expected to hold in the 1.18/1.22 area. The moving average ticked higher but is far from bullish. In the quarterly perspective, the neutral stance persists, as the moving average remains flat.