The American dollar had another bad week, falling to fresh 2020 lows against most major rivals. The EUR/USD pair peaked at 1.2272 and settled a handful of pips below it. The greenback was pressured by an optimistic mood related to Brexit talks and a US coronavirus relief package. The week went by and both issues remain unsolved, although investors are still waiting for positive news in the next couple of days.

Year-end mood kicks in as winter holidays are around the corner. Market’s movements could be wider than usual at this time of the year for a change, amid combined low volumes and big news. Whether the EU and the UK clinch a deal or not, the post-Brexit trade relationship will be defined in the upcoming days. The same goes for a US stimulus package, as the government will run out of funding by the end of this Friday. Lawmakers are likely to work sooner than later on funding and stimulus all together.

US Federal Reserve and covid out of control

The US Federal Reserve met on Wednesday and maintained its monetary policy unchanged as expected, but also reiterated its pledge to support the economy for as long as needed within the current pandemic context, using its full range of tools. There was a critical change in the official statement. In the previous documents, policymakers announced that they would maintain their bond-buying programs over the “upcoming months,” changing it this time to “until substantial further progress” is being made toward employment and inflation goals. The Fed painted a gloomy picture and the market reacted accordingly, further selling the American currency.

Meanwhile, the US reported over 270K new coronavirus cases in the last 24hours. The pandemic is out of control and several cities and states announced strict restrictive measures, which clearly add pressure on the local currency. The virus is also taking its toll in Europe, although there is a slightly better situation than across the Atlantic.

Tepid data and a sour reality

Macroeconomic data fell short of impressive. The preliminary estimates of December Markit PMIs resulted a bit finer than anticipated in the Union, although services indexes remained within contraction territory. Industrial Production in the EU printed at -3.8% YoY in October, while inflation in the euro area held in negative territory.

In the US, the big fail was Retail Sales, which fell by 1.1% MoM in November. Also, Initial Jobless Claims for the week ended on December 11 jumped to 885K, much worse than the 800K expected.

The US has a bit more of a busy week, which will include November Personal Spending and Personal Income and Durable Goods Orders for the same month. 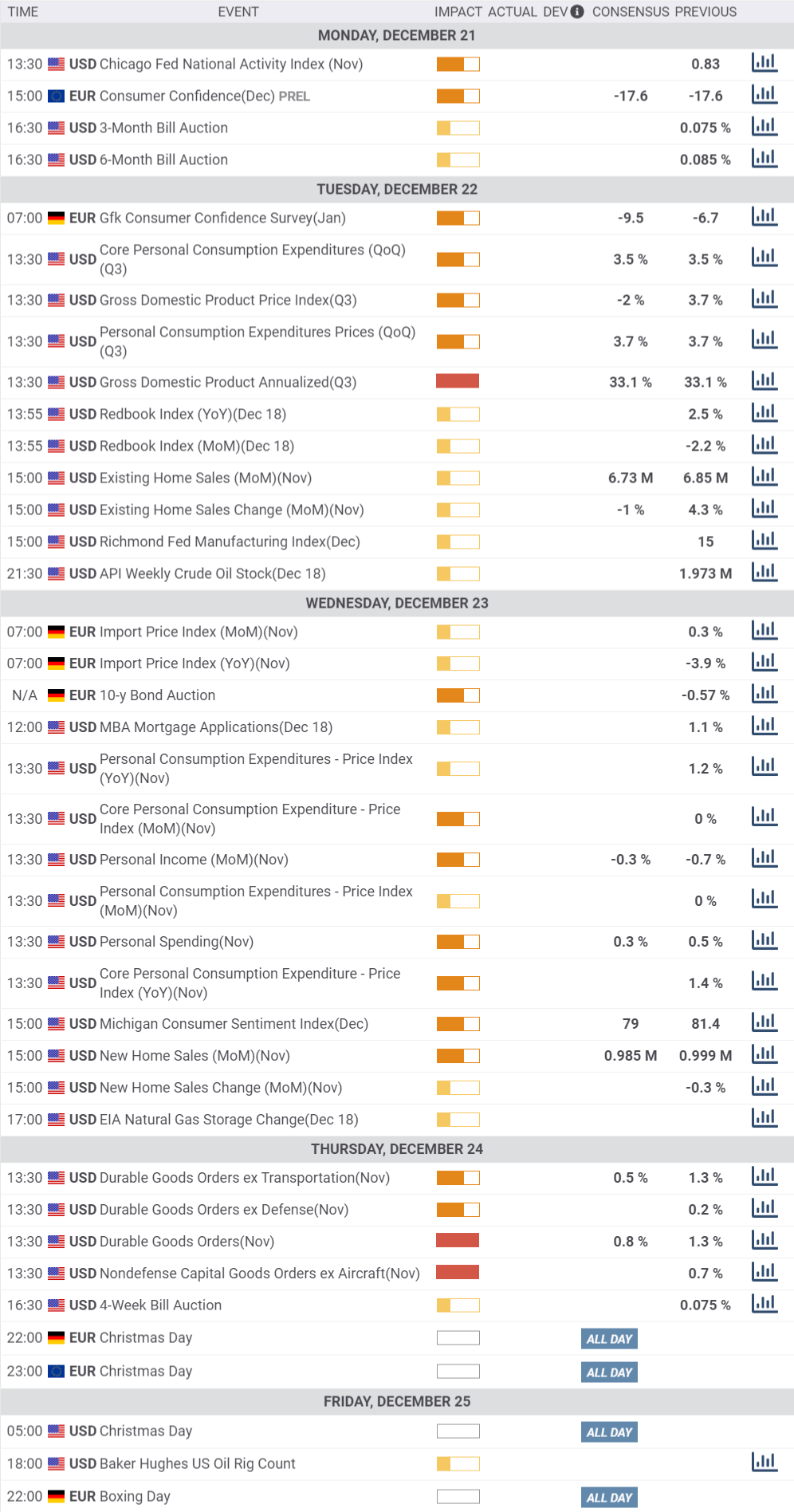 The EUR/USD pair heads into the holiday-season trading at two-year highs, bullish in the long-term. The weekly chart shows that technical indicators have extended their gains within positive levels, maintaining their bullish slope. The RSI indicator is nearing overbought readings. In the same chart, the 20 SMA heads north at around 1.1860, while the longer moving averages are below the 1.1500 level, indicating strong buying interest.

The pair is extremely overbought in the daily chart, as the RSI indicator hovers around 74. The Momentum indicator continues to advance while EUR/USD holds well above all of its moving averages. There are no signs of an imminent corrective decline, although profit-taking may kick in at any time.

The former year’s high at 1.2177 is the first support level, followed by 1.2100. A break below this last exposes 1.2000, although buying interest will likely take its chances on an approach to it. 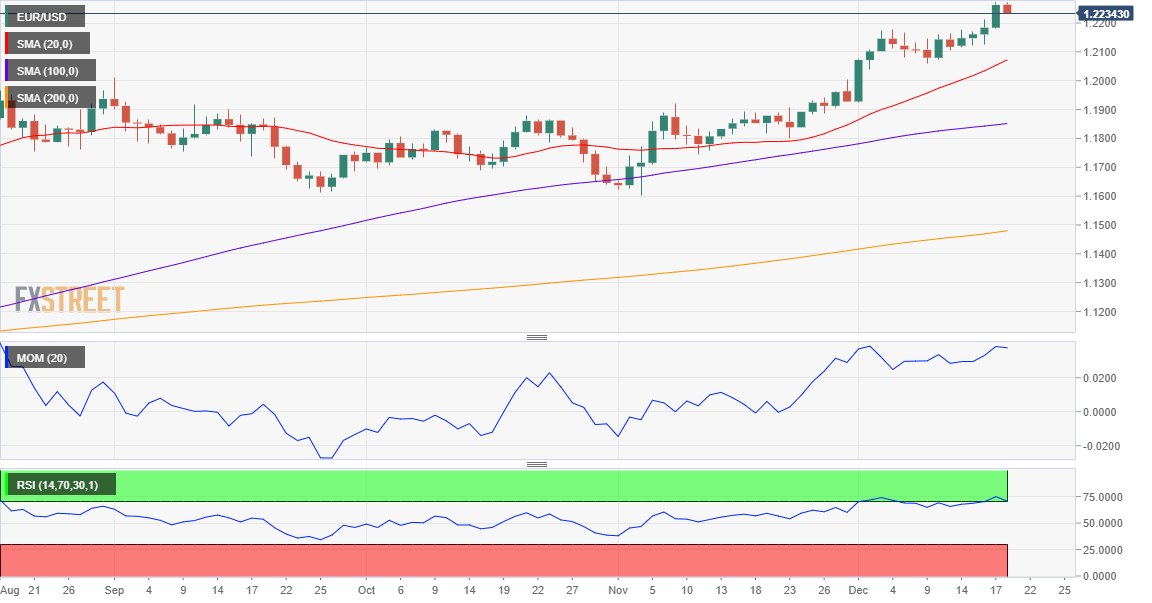 The FXStreet Forecast Poll anticipates that the EUR/USD pair will keep on rallying next week, before entering a corrective decline. The average target with 78% of the polled experts betting for an advance is 1.2279 weekly basis. In the subsequent periods, bears lead, but on average, the pair is seen holding above 1.2100.

According to the Overview chart, the bullish potential will remain firmly in place at least throughout the next month. The moving average in the weekly and monthly perspectives heads firmly north. The quarterly moving average is flat, with most possible targets accumulated between 1.20 and 1.22.