Despite all the gloomy forecasts regarding its prospects, the dollar closed in positive territory the second week in a row.

Nevertheless, it is still premature to talk about the reversal of the bearish dollar trend. At least until early November, when the US presidential elections are held, the dollar will remain under pressure from strong fundamental factors, periodically, however, receiving support from the next increase in tensions between the US and China and from the correction in the stock market, which still maintains an inverse correlation with the dollar.

Next week, investors will study important macro statistics on China, UK, USA, New Zealand, Australia, Canada, as well as the voting results in the British parliament on Brexit, scheduled for Monday. But their focus will be on the meetings of the world's three largest central banks (Bank of England, Bank of Japan and the Fed).

Any unexpected decisions or signals in the direction of further easing of the policies of these banks will cause increased volatility in the financial markets and weakening of GBP, JPY or USD, respectively.

Last Thursday, the EUR / USD rose to an intra-week high near 1.1917, but then declined, almost returning to the opening price of last week near 1.1845. 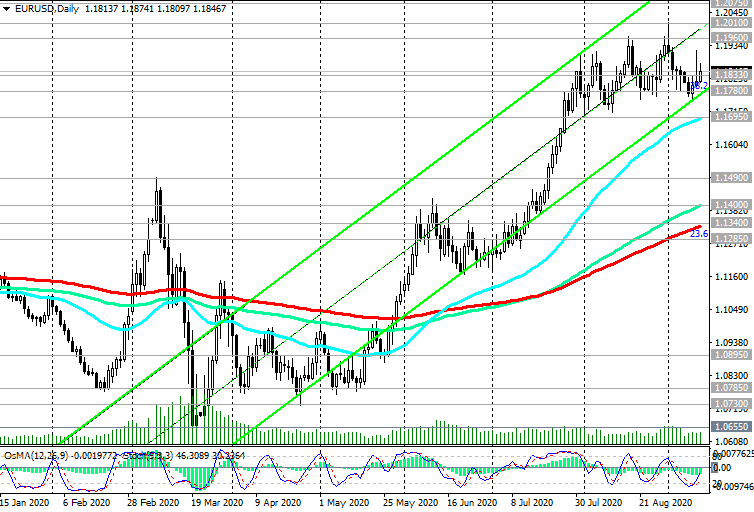 The intra-week volatility of the pair can be explained both by the decisions of the ECB and by the dynamics of the dollar, which has strengthened against the backdrop of the fall in American stock indices.

The pair maintains positive dynamics and a tendency for further growth. The dollar remains vulnerable amid the Fed's stimulus policy, and the euro, in turn, continues to receive support after EU leaders in July approved a program to support the European economy in the form of a spending package of 1.8 trillion euros, and last Thursday, the ECB leadership said it was not worried about the observed strengthening of the euro.