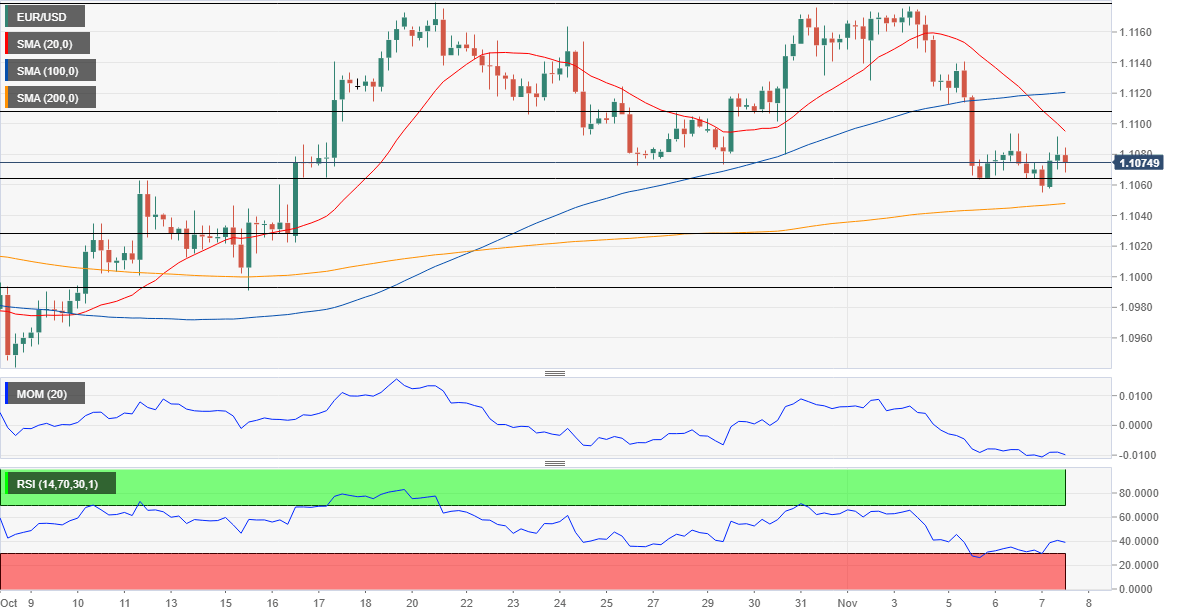 The EUR/USD pair continues trading below the 1.1100 figure, having extended its weekly decline to 1.1054. The market is mostly moving on sentiment, this last, depending on US-China trade relationship headlines. The mood was sour at the beginning of the day amid headlines indicating that Trump and Xi Jinping will delay the signing of phase one of a trade deal to December. The U-turn in mood came with news indicating that the Chinese Commerce Ministry said that the country has agreed with the US to cancel existing tariffs in different phases if a trade deal is reached.

However, the European Commission has downgraded its growth forecasts for this year and the next amid global trade tensions, weighing the EUR lower. Also, September German Industrial Production came in worse than expected, down by 0.6% in the month and by 4.3% when compared to a year earlier.

Ahead of Wall Street’s opening, the main indexes are at record highs, boosted by the latest headlines correlated to the US-China trade deal. The US has just released unemployment claims for the week ended November 1, which were better than expected, up by 211K.

The EUR/USD is trading around 1.1075, barely holding above a major Fibonacci support, the 38.2% retracement of its October rally. In the 4-hour chart, the 20 SMA has extended its slide, retaining its bearish slope after crossing below the 100 SMA. Technical indicators remain within negative levels, although lacking directional strength, as the pair trade within familiar levels. Nevertheless, the risk is skewed to the downside, with renewed selling interest below the 1.1060 price zone probably triggering a slide to lower lows.