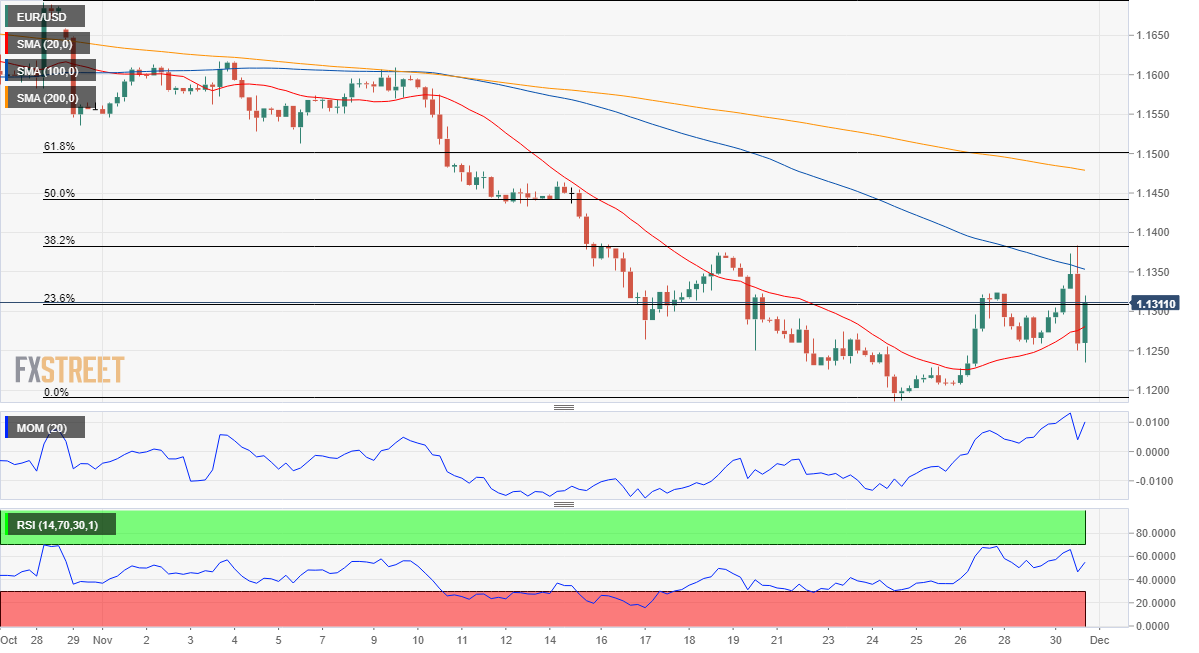 The EUR/USD pair surged to an intraday high of 1.1382, to later plunge to 1.1234. The volatile behaviour resulted from uncertainty related to the newest COVID-19 variant and the US Federal Reserve's upcoming monetary policy decisions.

On the one hand, news suggested that the current vaccines and antibody drugs' cocktails are likely to be less effective against the Omicron strain, although it is still unclear to which extent. The University of Oxford noted that there's no evidence existing vaccines won't provide some protection against it, although Moderna's CEO said he believes the vaccine effectiveness would probably drop. Mandatory vaccination and borders' closure spread globally.

On the other, US Federal Reserve Chair Jerome Powell testified on the CARES act before the Senate Banking Committee and surprised investors with his words. Firstly, he said that it is time to retire the term "transitory" for inflation." Risk of more persistent inflation has risen," Powell said. Additionally, he noted that it is appropriate to talk about speeding up tapering in the upcoming December meeting.

Data-wise, the EU published the Consumer Price Index, which surged to a record high of 4.9% YoY in November, according to preliminary estimates. The core reading printed at 2.6%, much higher than the previous 2%, piling pressure on the European Central Bank to start trimming facilities. The US released the November Chicago Purchasing Managers' Index, which contracted to 61.8 from 68.4 previously.

On Wednesday, Germany will publish October Retail Sales, expected to have dropped by 2% YoY.  Markit will publish the final readings of its Manufacturing PMIs for the EU and the US, while the latter will publish the AP survey on private jobs creation, foreseen at 525 K. Finally, Fed's Powell will repeat his testimony before a different commission.

The EUR/USD pair bounced from the mentioned low and currently trades just above the 1.1300 threshold, with modest intraday gains. The pair is struggling around the 23.6% retracement of its November decline, after topping around the 38.2% retracement of the same decline. The daily chart shows that a firmly bearish 20 SMA converges with the latter, while technical indicators remain well into negative territory, still correcting oversold conditions. The bullish potential remains limited as long as the pair remains below the 1.1380 price zone.

The 4-hour chart shows that sellers stand by a bearish 100 SMA, as the pair failed to overcome it, despite multiple attempts. The same chart shows, however, that EUR/USD is developing above a bullish 20 SMA, while technical indicators head firmly lower, retreating from overbought readings but holding within positive levels.