Markets have been embracing President Joe Biden in his first hours in office – and EUR/USD has also been benefitting. The safe-haven dollar has been on the back foot, allowing the common currency to gain ground.

After the ceremony, the new occupant of the White House wasted no time and began signing Executive Orders to promote his agenda –and promoted his $1.9 trillion relief bill. Will the package receive bipartisan support as Biden wishes? Markets do not seem to care, seemingly seeing the new administration's enthusiasm as a sign it would pass anyway.

More President Joe Biden: The Markets And The First 100 Days

The Federal Reserve is on call to fund the new expenditure as no new taxes are imminent, and that is weighing on the greenback. The next moves by Biden – and Senate Republicans – will likely have substantial sway on the dollar.

Weekly US Unemployment Claims figures may help convince lawmakers to back further fiscal support. Initial applications jumped to 965,000 last week – the worst since August – a sign that the resurgence of the virus and lapse of government programs is taking its toll. A minor drop is on the cards.

On the other side of the pond, the European Central Bank is in the spotlight on Thursday. Recent inflation figures have hovered around 0%, far from the ECB's 2% target – and the euro's relatively high exchange rate is one of the culprits. Will the bank talk down its currency? ECB President Christine Lagarde will likely warn of the consequences and state that she is "closely monitoring" the common currency's value.

However, the Frankfurt-based institution is unlikely cut its deposit rate below the current -0.50%. AS the past year has shown, printing more euros has only boosted the euro and the only tool to lower it is slashing borrowing costs. Without a credible threat, it would be hard to send EUR/USD down.

See ECB Preview: Lagarde may trigger a “buy the dip” opportunity by trying to talk down the euro

On the vaccination front, Biden aims to ramp up the distribution of jabs, while Europe remains at its sluggish pace. A delay in the shipment of doses from Pfizer is frustrating European leaders and is marginally holding the euro back.

All in all, hopes for US stimulus and a failed attempt by the ECB to talk down the euro may boost EUR/USD. 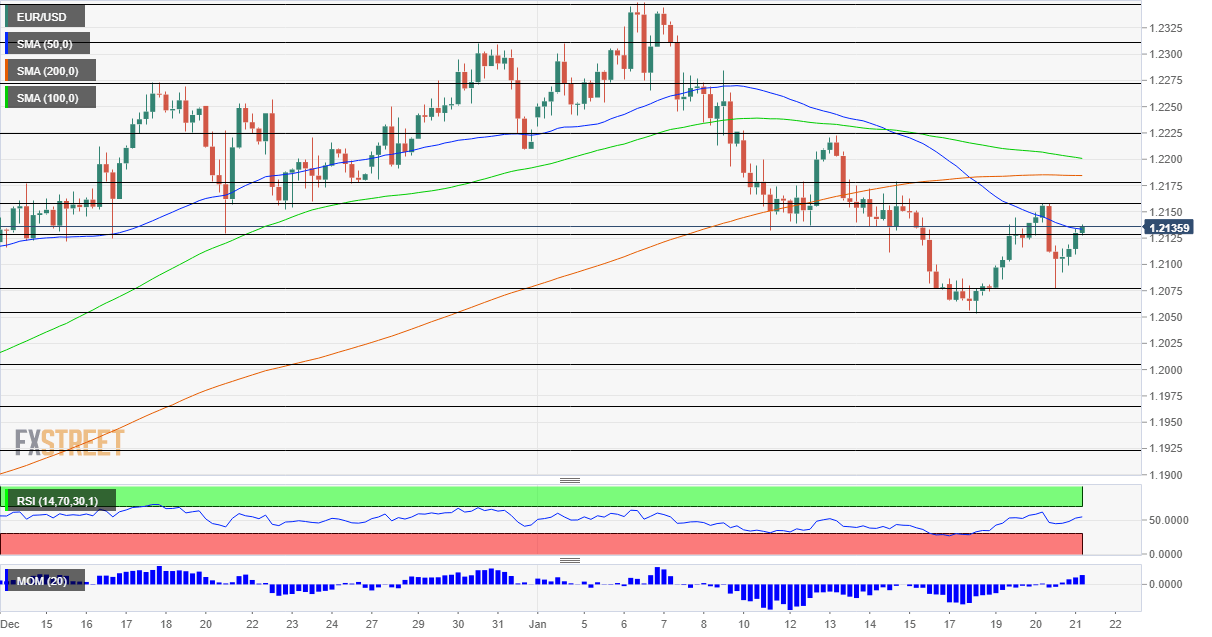 Momentum on the four-hour chart has turned to the upside, a bullish sign. Euro/dollar is also edging above the 50 Simple Moving Average, a sign that bears are retreating. Bulls are not out of the woods just yet but are gaining ground.

Learn to trade with our 24/7 signals + Webinars

AUD/USD bounces back above 0.7650 amid risk-recovery

AUD/USD extends the bounce above 0.7650, as the risk sentiment recovers amid retreating US Treasury yields, which put a check on the US dollar's rally. The aussie cheers upbeat NAB Business Survey while shrugging off the sell-off in iron-ore prices.

Cardano advances unabated on its path towards decentralization. The so-called “Ethereum killer” will reach 100% decentralization by the end of March.  ADA price is holding key support at $1.10 as volume remains light.

Gold looks to regain $1,700 as US Treasury yields drop

GBP/USD attempts a bounce around 1.3850 amid improving mood

GBP/USD trades close to 1.3850, staging an impressive bounce from 1.38 amid a rebound in the risk sentiment and a drop in the US Treasury yields. 50-day SMA offers immediate support, monthly top adds to the upside barriers.

The dollar index (DXY) has retreated from the session high of 92.50 to 92.40. The pullback may be extended further as the hourly chart Relative Strength Index (RSI) shows a bearish divergence. It occurs when an indicator charts lower highs contradicting higher highs on the price chart and often paves the way for pullbacks.