The American dollar started the week advancing moderately, particularly against its European rivals, with the EUR/USD falling down to 1.0963 before bouncing modestly early London, contained however, by the 1.1000 psychological level. The release of September final inflation figures in the UE matched market's expectations and previous estimates, with the core Y-o-Y reading steady at 0.8%, having a null effect over the pair.

Later today, the US will release its NY manufacturing index and industrial production data for September, while ECB's Draghi will offer the welcoming remarks at the European Cultural Days of the ECB event, in Frankfurt. He will hardly discuss economic policies then, but given that the European Central Bank will meet later this week, investors may hold on cautious ahead of his words. 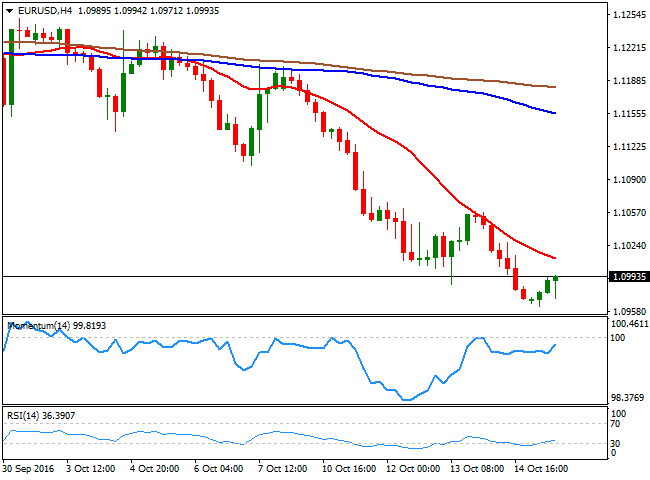 The EUR/USD pair trades in the 1.0900 region, and according to the 4 hours chart, the pair can correct higher, but a steeper recovery seems well-limited, given that the price is well below a bearish 20 SMA, currently around 1.1010, the immediate resistance, while the Momentum indicator aims modestly higher, right below its 100 level, and the RSI indicator aims to recover from oversold territory.