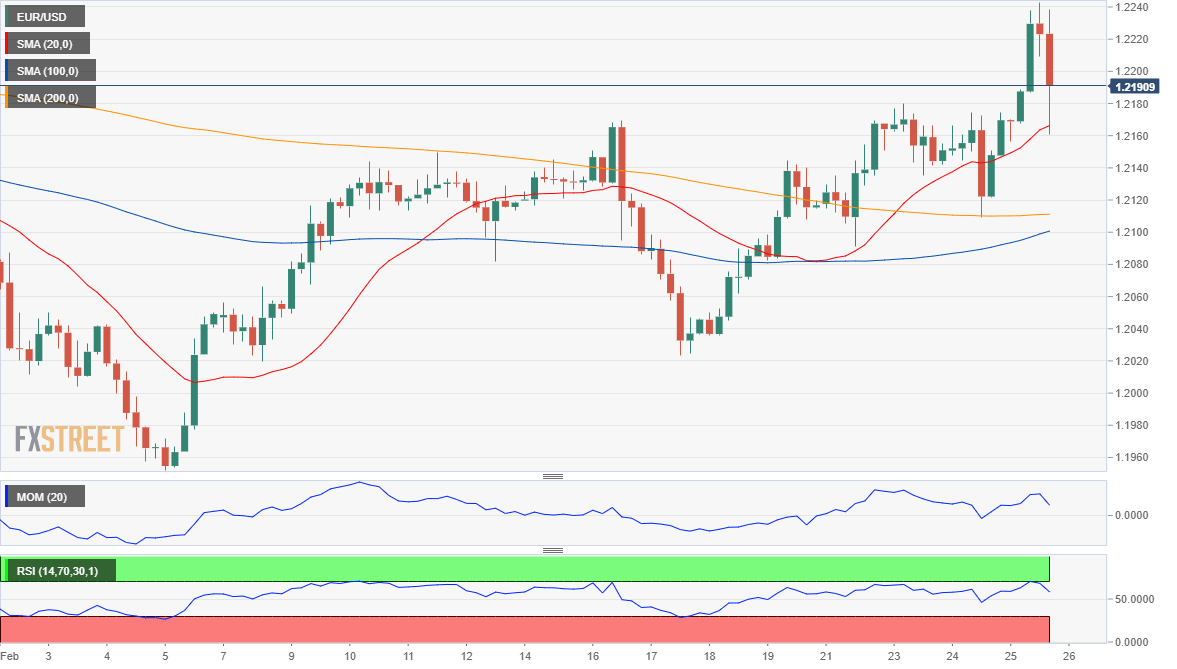 The EUR/USD pair peaked at 1.2242, its highest since early January, finally breaching the 1.2170/80 resistance area. The pair rallied on the back of risk-appetite which dominated financial markets throughout the first half of the day but faded after US investors reached their desks. European indexes closed mixed, while US ones edged lower, erasing pre-opening gains.  Meanwhile, US Treasury yields extended their rallies to fresh one-year highs, boosted by encouraging US data.

The US  published January Durable Goods Orders, which resulted at 3.4%, vs the 1.1% expected. Initial Jobless Claims for the week ended February 17 improved to 730K, while the Q4 Gross Domestic Product was upwardly revised to 4.1% as expected. European data was also upbeat, as  Germany published the March GFK Consumer Confidence Survey, which improved to -12.9 from -15.5. The EU Economic Sentiment Indicator printed at 93.4 in February from 91.5 in the previous month.

Friday’s macroeconomic calendar won’t include European figures, while the US will publish January Personal Income and Personal Spending and the final reading of the February Michigan Consumer Sentiment Index, foreseen at 76.5.

The EUR/USD pair retreated from the mentioned high as a souring market mood helped the greenback. However, the pair is still developing above the 23.6% retracement of its November/January rally at around 12170. The 4-hour chart shows that the pair has advanced well above its moving averages, with the 20 SMA advancing a few pips below the mentioned Fibonacci level. Technical indicators have lost their bullish strength but remain well above their midlines, indicating limited selling interest.