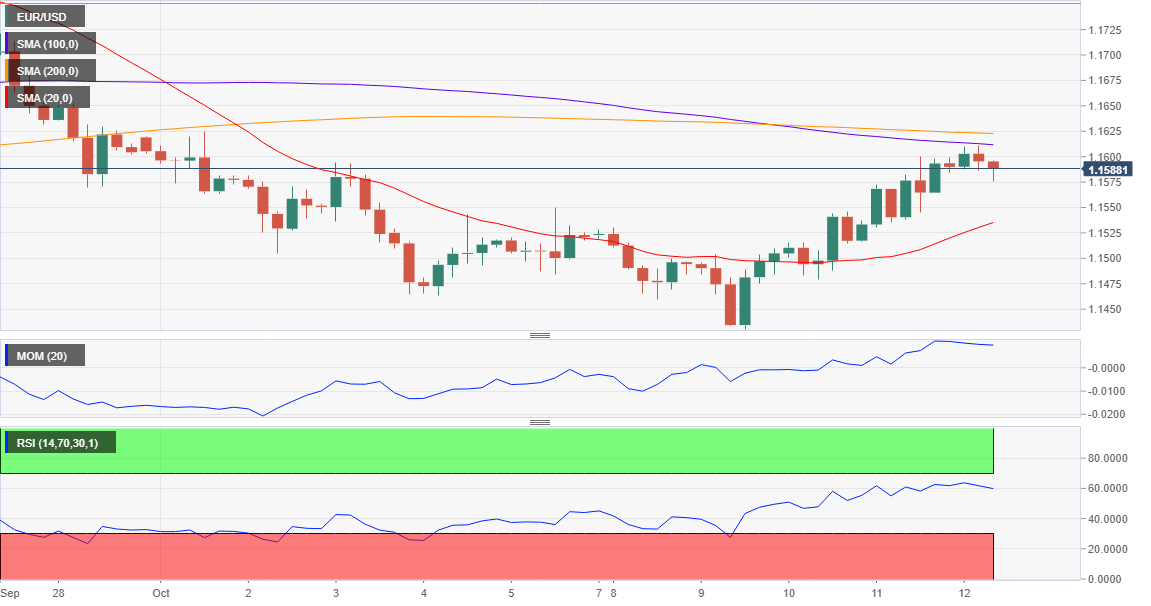 The EUR/USD pair eased from the 1.1610 high reached during Asian trading hours, currently in the 1.1580 region, as markets seem to have finally stabilized. Asian shares are in the green, while European indexes have opened firmly higher after two days of sharp slides, bringing some relief to the greenback, which anyway remains weak across the board. Furthermore, US Treasury yields are marginally up after plummeting yesterday, with the benchmark yield for the 10-year Treasury note at 3.16%.

The macroeconomic calendar has already offered some figures from the EU, including German September inflation, which was confirmed at 2.2% YoY, passing unnoticed, and the EU August Industrial Production data which also had no effect on the pair, despite beating expectations, up 1.0% MoM and 0.9% YoY. The US will release the October preliminary Michigan Consumer Sentiment Index later today, foreseen at 100.4 from 100.1 in September.

The pair is trading between Fibonacci retracements, contained by the 50% a few pips above the mentioned high, but above the 38.2%, the immediate support around 1.1570. In the 4 hours chart, a mild bearish 100 SMA converges with the daily top, while the 20 SMA maintains a bullish slope well below the current level. Technical indicators in this last time frame have eased from overbought readings but remain well into positive territory, all of which suggests that selling interest remains limited. Seems unlikely that market players will go back into buying the greenback, although if the positive mood prevails, the pair can correct down to the 1.1520 price zone.