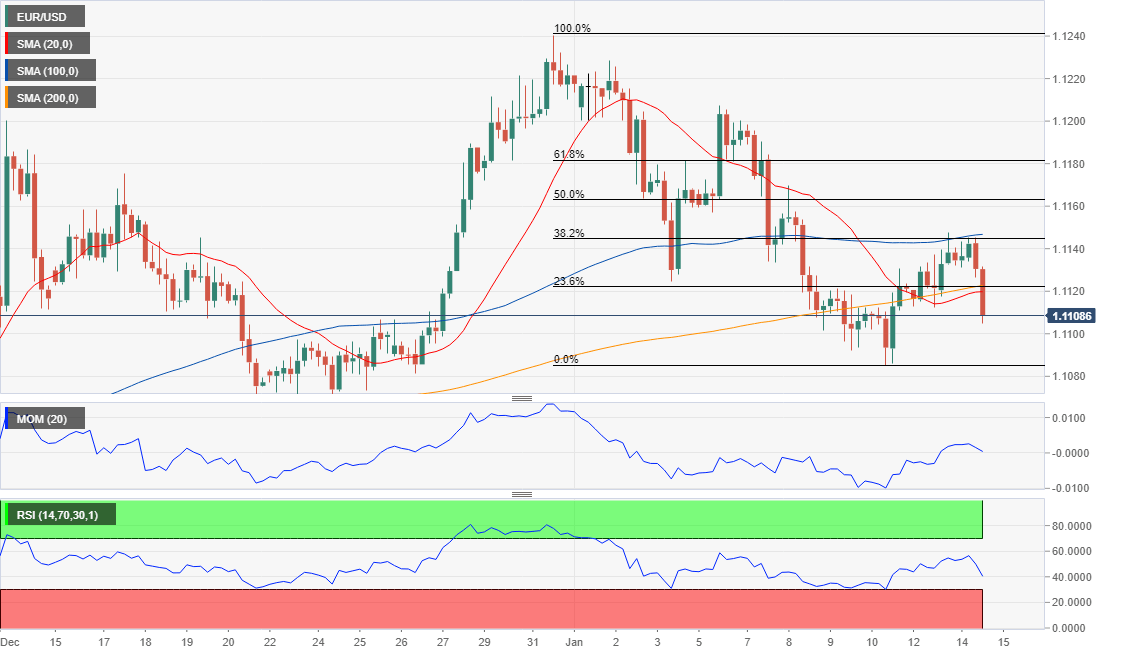 The EUR/USD pair is losing some ground this Tuesday, although still confined to a tight intraday range. The pair hit a high of 1.1146 on Monday and was unable to surpass it, despite the upbeat mood that prevailed in the Asian session. The positive sentiment faded during London trading hours.

News indicated that the EU Trade Commissioner Phil Hogan is heading to Washington today to meet US Trade Representative Robert Lighthizer to pour some cold water on the trade relationship between the two economies after US President Trump threatened to retaliate on French tax on US firms. Also, the White House announced it would include Switzerland in a currency manipulator watch-list.

Ahead of Wall Street opening, the US has just released the final version of December inflation. According to the official report, the annual CPI came in as expected at 2.3%, while the core reading also printed 2.3%, as expected. Monthly core inflation, however, missed the market’s expectations, rising by 0.1%.

The EUR/USD pair pared its decline after unimpressive inflation figures, trading at around 1.1110. Measuring the decline between 1.1238 and 1.1084, the pair has topped at around the 38.2% retracement at 1.1145, now a relevant static resistance level. In the 4-hour chart, the price is currently below its 20 and 100 SMA while battling the 200 SMA, all of them lacking directional strength. Technical indicators have turned south, with the RSI already within negative levels, suggesting additional slides ahead.

EUR/USD looks north with the German economy showing signs of bottoming out and heightened expectations for an EU fiscal stimulus plan. Stronger gains, however, may remain elusive if the stock markets drop, tracking losses on Wall Street.

Consumer prices that collapsed in March and April have begun to return to normal as people return to work and shopping, and the country puts the complete lockdowns of the spring behind it.