As expected, the shared currency strength didn’t last long. The EUR/USD pair resumed its decline these last few days, piercing the 1.0800 threshold by the end of the week. Volatility remained high, although far from the levels seen in the previous weeks. The coronavirus pandemic, on the other hand, kept worsening, with the number of global cases above 1M and the death toll above 50,000. Sentiment seesawed between fear and calm, without any optimism at sight. The US is now the country with most cases, followed by Italy and Spain.

Central banks remained sidelined, probably the reason why volatility was lower. The full armor has already been shoot, and policymakers are in a wait-and-see stance to see whether this would be enough, quite an unlikely scenario.

Coronavirus pandemic overshadows it all

The effects of COVID-19 on economic growth have continued to show. According to Markit, business output in the EU was worse than initially estimated, as the Union’s  Manufacturing PMI and Services PMI were downwardly revised. US figures were as equally discouraging, as, despite better-than-anticipated, the numbers indicated economic contraction.

The US March official ISM Manufacturing PMI surprised to the upside with 49.1, while the ISM Services PMI came in at 52.5, much better than the 44 expected.

The US Nonfarm Payroll report was a carnage. The US economy lost 701K positions in March, while the unemployment claim jumped from 3.4% to 4.4%. And that does not fully reflect the situation, as data were collected at least 10 days ahead of the month-end, not reflecting the outrageous surge in weekly unemployment claims.  Even further, almost all data were collected before the US issued the stay at home orders.

Dollar bulls, however, prevailed. The greenback continued to appreciate even despite the terrible numbers, as the high degree of uncertainty related to the pandemic overshadows it all. Even further, market players are already aware the NFP figures will be on the millions in April.

Central bankers back in the spotlight

For the upcoming days, the focus will remain on the developments of the coronavirus outbreak. There are some mild hopes coming from Italy and Spain, as the curve of contagion has started to flatten, although the improvement is little and the cost is extremely high. Those hoping for a soon-to-come solution to this chaos may be disappointed. It won’t be just a “couple” of tough weeks as US President Trump said. It will take much longer for the economies to get back in motion.

The most relevant events next week will be the FOMC Meeting Minutes and the ECB Monetary Policy Meeting Accounts, as any clue on future actions or an assessment of the latest decision could affect the market. The rest of the macroeconomic numbers will likely pass unnoticed, although will help to build the whole picture of major economies.

Germany will release Factory Orders and Industrial Production, both for February, while the US will publish March inflation data.

The EUR/USD pair is trading at around 1.0790, below the 61.8% retracement of its previous weekly recovery at around 1.0830, an immediate resistance level. The pair is back in its bearish path, and at risk of falling beyond the yearly low at 1.0635.

The weekly chart shows that it plunged below its 20 SMA, while the 100 SMA is below the 200 SMA. Technical indicators resumed their declines from around their midlines, now heading firmly south within negative levels.

In the daily chart, the pair is developing far below all of its moving averages, with the 20 DMA accelerating south below the larger ones, as technical indicators head firmly lower near oversold readings. 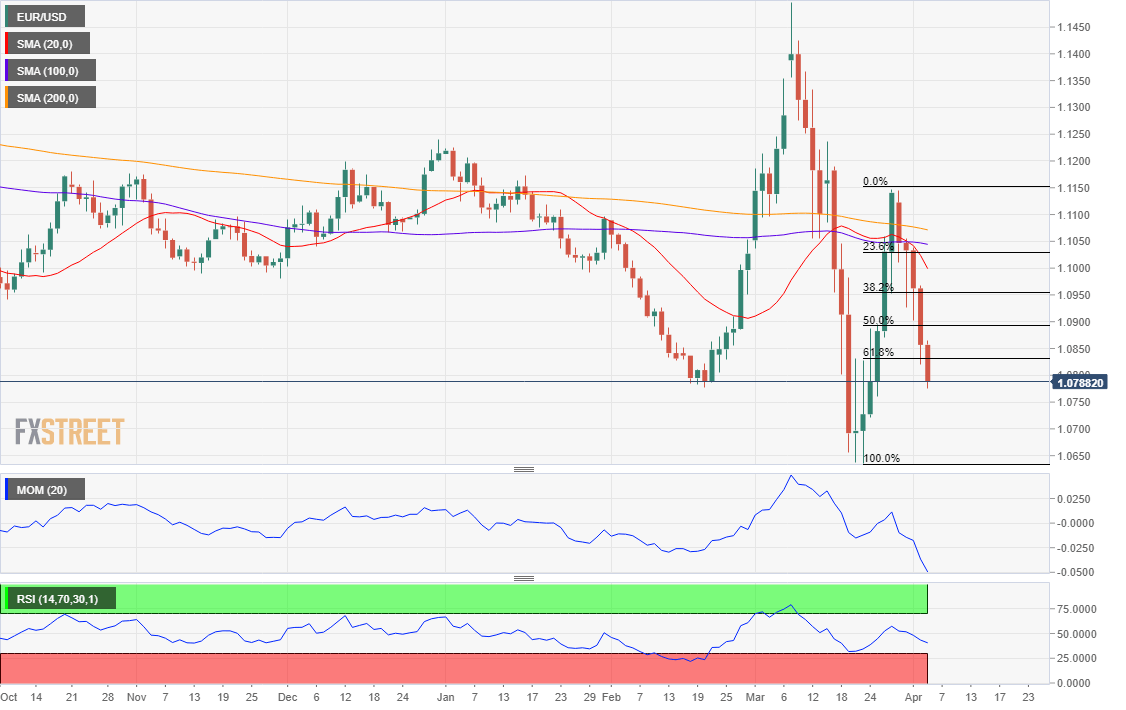 The FXStreet Forecast Poll indicates that the positive sentiment toward the dollar would remain next week, with 63% of the polled experts on the negative side. On average, the pair is seen down to 1.0763. Bulls surge in the monthly perspective, rising to 70% in the quarterly view, with the pair seen recovery toward the 1.1000 level.