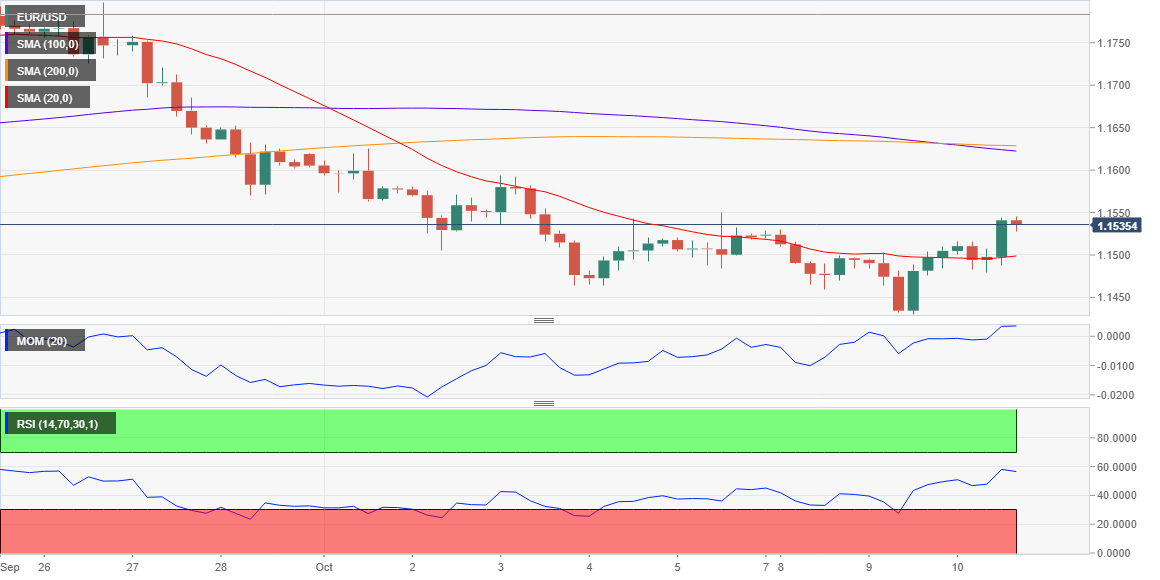 The EUR/USD pair regained the 1.1500 level and advanced up to 1.1543, its highest for this week, as trade war fears returned with a vengeance. The dollar came under selling pressure amid comments from US Treasury Secretary Steven Mnuchin who said that China shouldn't weaken its currency as long as the differences between the two countries remain unsolved, further adding that the renminbi should be part of any possible trade deal. Italian-related concerns were moved to the background, while US Treasury yields influence was also limited, although the 2-year note yield jumped to 2.90%, its highest level since June 2008. US data failed to impress, adding pressure on the greenback. According to the official releases, the September Producer Price Index advanced 0.2% MoM and by 2.6% YoY, this last, missing the market's forecast of 2.8%. Also, Wholesales Inventories increased in August 1.0%, surpassing the previous 0.8%. Little has to offer the EU this Thursday, at least, according to the calendar, while the US will unveil September CPI foreseen up by 2.4% YoY.

European currencies were the ones more benefited from broad dollar's weakness, further boosted by renewed hopes about a Brexit deal. As for the common currency, the intraday advance is still short of confirming an interim bottom at the low set last week in the 1.1460 price zone. Nevertheless, the pair has a short-term positive tone, as it recovered above the 23.6% retracement of its latest daily decline, now an immediate short-term support at around 1.1520.  In the 4 hours chart, the pair advanced above a now flat 20 SMA, and while technical indicators advance within positive levels, the price is still developing below the 100 and 200 SMA, with the shortest crossing below the largest and both above 1.1600, indicating that in the longer run, the risk remains skewed to the downside.