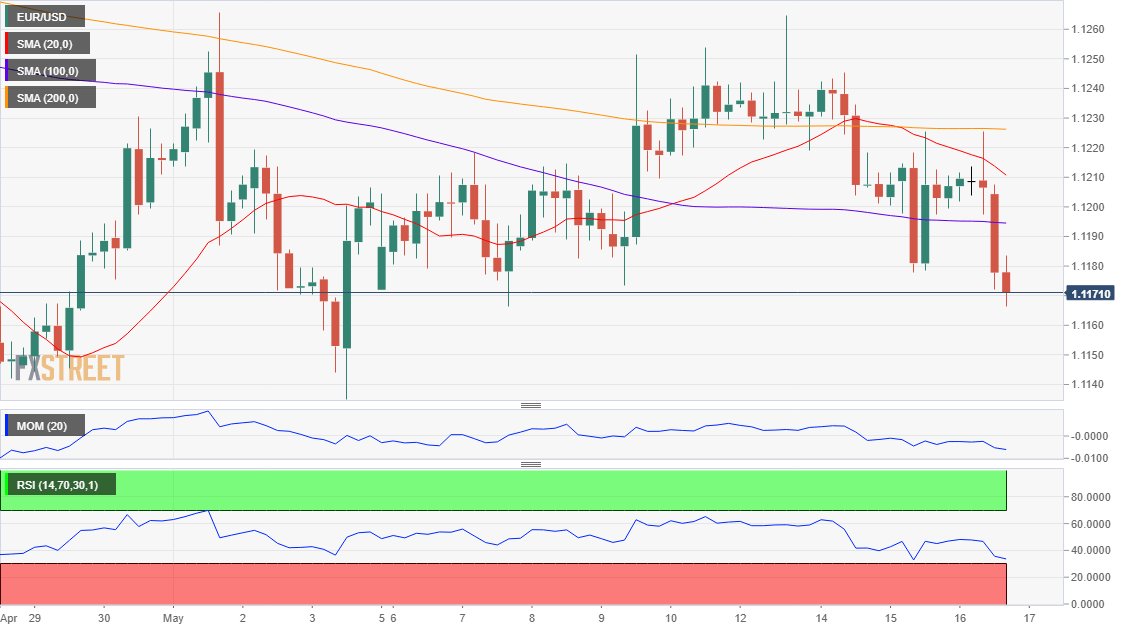 The American currency stands victorious this Thursday ending the day up against most major rivals. The EUR/USD pair attempted a recovery but was contained by sellers around 1.1220, to reach a fresh weekly low of 1.1165, heading into Friday around this last. Tensions between China and the US continue, following US President Trump's decision to declared a national emergency over threats against American technology, which ended up with the US Department of Commerce adding Huawei Technologies and its affiliates to the BIS Entity List, making it harder for the company to do business with US companies.  Nevertheless, sentiment turned on during the American session on the back of outstanding earnings reports from big names. The positive sentiment was backed by US data, which beat the market's expectations. According to the official releases, Housing Starts and Building Permits were up monthly basis by more than anticipated in April, while unemployment claims for the week ended May 10 decreased to 212K, better than the 220K expected. Also, the Philadelphia Fed Manufacturing Survey came in at 16.6, much better than the previous 8.5 and above the forecasted 9.0.

The last day of the week will bring European inflation, with the annual CPI seen up by 1.7% in April. The US will only release the May preliminary Michigan Consumer Sentiment Index, expected to print 97.5 vs. 97.2 in April.

The EUR/USD pair is poised to extend its decline, mainly after breaking below the 38.2% retracement of its latest downward move at 1.1190, a level challenged several times these last few days. In the 4 hours chart, the pair settled below all of its moving averages, with the 20 SMA speeding up its decline in the 1.1220 region, as technical indicators maintain bearish slopes well into negative ground, the Momentum at fresh monthly lows and the RSI currently at 39, all of which maintains the risk skewed to the downside. The immediate support is the 1.1150/60 price zone, where the pair has several intraday lows alongside the 23.6% retracement of the mentioned decline with a break below the area exposing 1.1110, the yearly low.