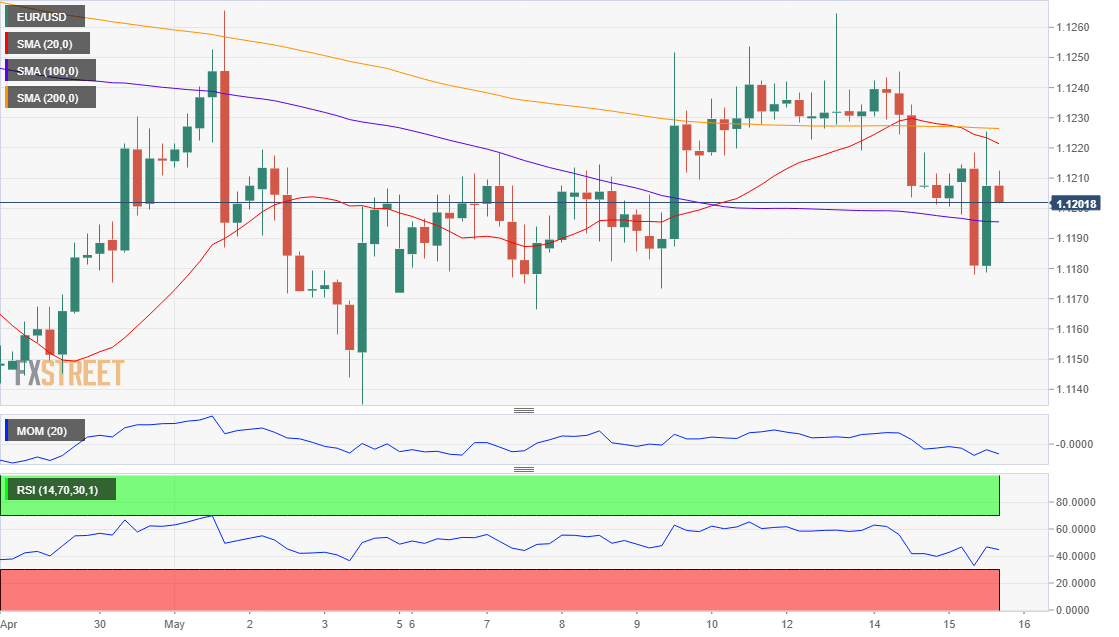 Currencies seesawed alongside sentiment this Wednesday, with the EUR/USD pair falling to 1.1177, its lowest for this week, to later recover up to 1.1224, now trading little changed daily basis at around 1.1210. Softer-than-expected Chinese data dented the market's mood at the beginning of the day, although risk aversion peaked during European trading hours, with government bond yields falling to multi-week lows on rumors China may start selling US Treasuries. European data had little effect on the shared currency, as the preliminary Q1 GDP came in at 0.4% for Germany and 0.4% also for the whole EU, both matching the market's forecasts. The pair recovered just modestly after disappointing US data, as April Retail Sales were down monthly basis by 0.2%. The core reading, Retail Sales Control Group, resulted unchanged vs. a 0.4% advance expected. Also, Industrial Production fell by 0.5% MoM in April, while Capacity Utilization in the same month was of 77.9%. However, the dollar retained its gains, giving up only after the US Government was planning to delay tariffs on car imports for six months, pushing equities higher in detriment of safe-haven assets.

Despite the positive tone of worldwide indexes, the shared currency seems quite vulnerable ahead of Thursday's opening, with the macroeconomic calendar having some minor figures scheduled. The Union will publish March Trade Balance, with the surplus seen shrinking to €17.1B and the US releasing April Building Permits and Housing starts, seen bouncing, weekly unemployment figures, and the Philly Manufacturing survey.

The short-term picture for the pair indicates that further declines are still likely, as, in the 4 hours chart, technical indicators have modestly recovered from their lows but remain within negative levels without actual strength. The intraday spike was contained by sellers aligned at around the 20 and 200 SMA, both converging at around the mentioned low, while the price is barely holding above a bearish 100 SMA. Furthermore, the pair tested levels below 1.1190, the 38.2% retracement of its latest daily slide, unable to move beyond the 50% retracement of the same decline.