The shared currency was among the weakest performers on Friday and was being weighed down heavily another round of disappointing Euro-zone economic data, showing that the region's factory activity slipped deeper into contraction territory in March. The German manufacturing PMI fell to 44.7 - the lowest in 6 1/2 years, while the composite Euro-zone manufacturing PMI came in at a 71-month low level of 47.7. The German 10-year bond yields turn negative for the first time since October 2016 in reaction to the dismal data and prompted some aggressive selling around the EUR/USD major.

Meanwhile, an inverted US Treasury yield curve, widely seen as a leading indicator of economic recession, further benefitted the US Dollar's relative safe-haven status against the European counterpart. The pair extended its sharp retracement from six-week tops, touched in the aftermath of dovish FOMC policy update on Wednesday, and tumbled to 1-1/2 week lows, though managed to find some support at lower levels and finally settled near the 1.1300 mark.

The pair now seems to have stabilized near the mentioned handle as market participants now look forward to the release of German Ifo Business Climate for some fresh impetus. There isn't any major market-moving economic data due for release from the US and hence, the bond yield dynamics might continue to play an important role in influencing the pair's momentum at the first trading day of a new week.

From a technical perspective, the pair's inability to capitalize on the recent bullish break through a six-month-old descending trend-line resistance and a subsequent sharp rejection slide from 50% Fibonacci retracement level of the 1.0341-1.2556 up-move now points the resumption of the prior well-established bearish trend. A follow-through weakness below Friday's swing low, around the 1.1275-70 region, will further reinforce the bearish set-up and turn the pair vulnerable to accelerate the downfall further towards the 1.1220-15 intermediate support en-route the 1.1200 handle.

On the flip side, the 1.1330-35 region now seems to act as an immediate resistance and is followed by the 1.1365-70 area, above which the pair is likely to make a fresh attempt towards surpassing the 1.1400 round figure mark. Move beyond the mentioned hurdle might prompt some additional short-covering move but seems more likely to remain capped near the 1.1445-50 region, post-FOMC recent swing high. 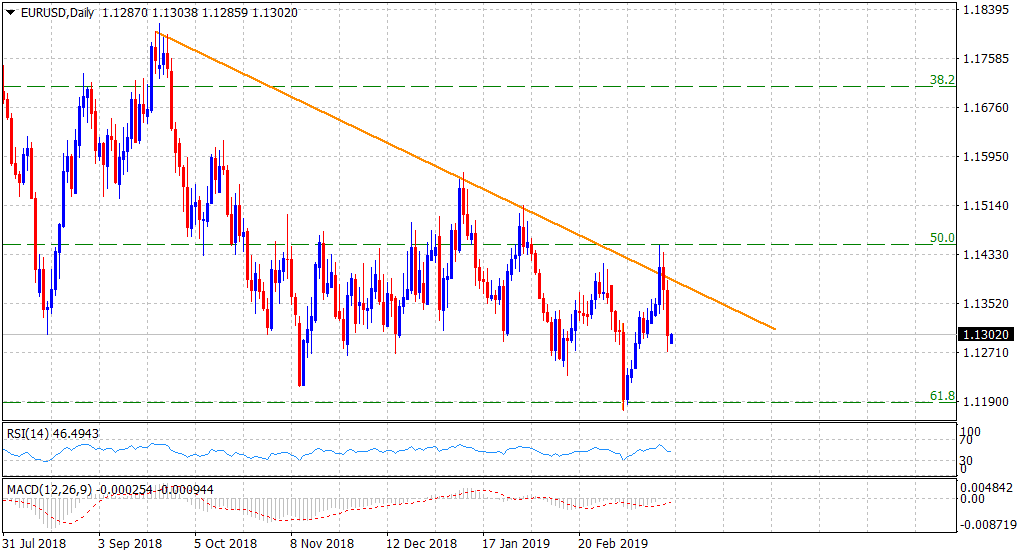