Broad dollar's weakness led the way at the beginning of the day, with the EUR/USD pair reaching 1.1857 as its daily high, barely up 30 pips for the day, amid the absence of relevant macroeconomic data coming from Europe, and a prevalent wait-and-see mode ahead of Fed's meeting minutes. The document, released at the end of the US session, was unable to lift the greenback, as despite many Fed official saw another hike as warranted for this year, concerns on whether soft inflation is persistent or temporary made several want stronger evidence of price gains before pulling the trigger. Policymakers added that upcoming decisions are data dependant. Overall, nothing that surprised investors, but certainly not a dollar bullish stance. The EUR/USD pair extended its intraday advance by a few pips, and holds around 1.1850 ahead of Wall Street's close, ahead of a more consistent macroeconomic calendar in the US, for the first time this week. The world's largest economy will release its September PPI and weekly employment figures, ahead of Friday inflation and sales data. 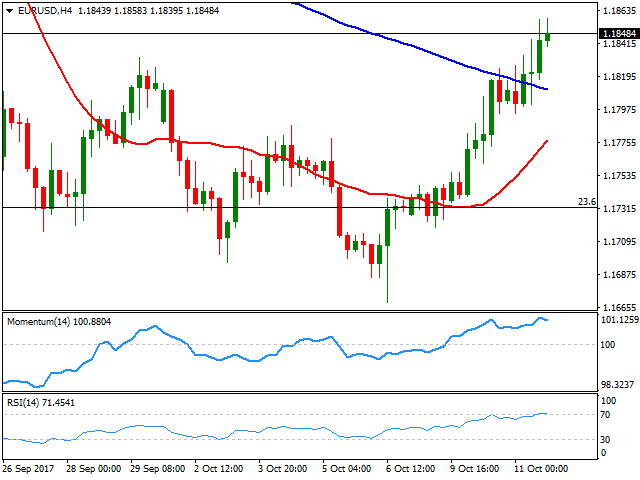 From a technical point of view, the pair presents a positive tone ahead of the Asian opening, as in the 4 hours chart, the price has managed to advance further above its 20 and 100 SMAs, with the shortest gaining upward strength below the largest, which anyway maintains a bearish slope. Technical indicators in the mentioned chart had lost upward strength, but hold near overbought readings, in line with further gains ahead, as long as pullbacks are contained around 1.1820/30, a major static support now after the pair recovered the level earlier this Wednesday. To the upside, sellers have surged on approaches to the 1.1900 figure, which means that an advance beyond the level should lead to a continued advance, up to 1.1965.