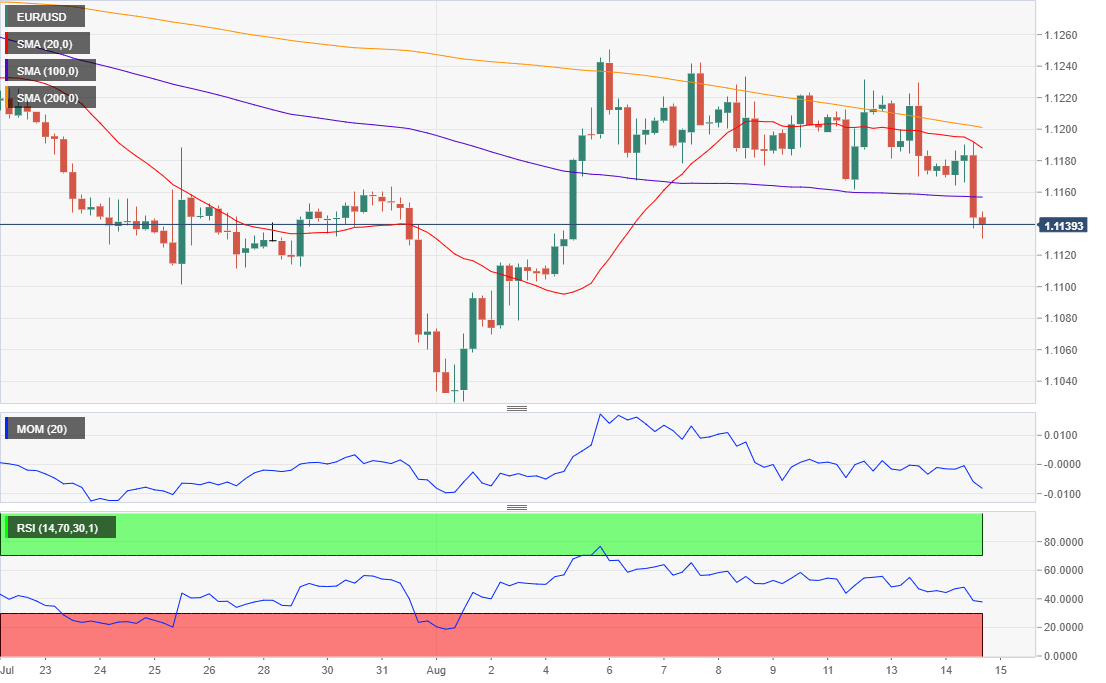 Speculative interest was on its toes this Wednesday, with safe-haven assets resuming their advances after Tuesday’s slump. The EUR/USD pair broke lower and reached a fresh 2-week low of 1.1132, after a failed attempt to recover the 1.1200 figure. The shared currency bared well with European data, although figures pointed to a steeper slowdown in the EU, as growth in Germany contracted in the second quarter of the year, with the preliminary estimate of  GDP resulting at -0.1%. For the entire Union, Q2 GDP resulted at 0.2%, also meeting the market´s forecast. Additionally, Industrial Production in the Union fell by more-than-anticipated in June, down by 1.6% MoM and decreasing by 2.6% YoY. The US didn’t release relevant data, but all hell broke loose when the yield-curve between the 10-year yield and that of the 2-year bond inverted, understood as a sign of an upcoming recession. By the end of the day, the benchmark yield of the 10-year Treasury was at 1.59%, after hitting a daily low of 1.57%. The benchmark yield for the 2-year note was at 1.58%.

This Thursday, several European countries will observe the Assumption Day Holiday, which means there won’t be relevant data releases. The US, on the other hand, will publish the NY Empire State Manufacturing Index for August, foreseen at 3.0 from the previous 4.3, July Retail Sales, expected to have grown by 0.3%, and some employment figures included weekly unemployment claims and Q2 Nonfarm Productivity.

The EUR/USD pair is trading a handful of pips above the mentioned daily low, barely holding above the 50% retracement of the latest bullish run. The most relevant 61.8% retracement of the same rally stands at 1.1110, now a relevant support as, once below, bears will become more courageous. Technical readings in the 4 hours chart indicate that the decline may continue during the upcoming sessions, as it settled below bearish moving averages, now below the 100 SMA for the first time since August 5. The Momentum indicator heads lower within negative levels, while the RSI stabilized at 35, both suggesting that additional declines are likely during the upcoming sessions.