Cryptocurrencies ignored the hawkish tone from the Federal Reserve and continued their bullish trend. Bitcoin rose by more than 0.72% while Ethereum rose by more than 7%. It is approaching its all-time high. The biggest news came from Crypto.com, which announced that it would acquire two exchanges from IG Group. The firm bought North American Derivatives Exchange (Nadex) and Small Exchange for $216 million. This deal came a few weeks after the company announced its plans to acquire naming rights for Staples Center for about $700 million. It is also spending about $100 million in a marketing blitz. CRO, its native token, rose by more than 7%.

Global stocks stabilized today even after the hawkish statement by Jerome Powell and a major warning by OECD. In a statement on Tuesday, the Fed Chair said that the central bank will likely wind down its massive quantitative easing (QE) program earlier than expected. He warned that the new Omicron variant could lead to more challenges, which could lead to higher prices. In a report today, the OECD warned that the virus threatens to intensify imbalances that are slowing growth and boosting inflation. The organization expects that the global economy will grow by about 5% in 2022, with China and India leading this recovery.

The price of crude oil bounced back as the market waited for the outcome of the upcoming OPEC+ meeting. The cartel is meeting at an important time. A new more dangerous variant of Covid-19 has been announced while the United States and other countries are releasing their strategic petroleum reserves (SPR). Their goal is to lower oil prices since the cartel is not boosting production as was widely expected. Also, the meeting comes at a time when prices have dropped by more than 20%. Therefore, there is a likelihood that the cartel will decide to slow the pace of supply increases.

The ETHUSD pair has been in a strong bullish trend in the past few weeks. The trend started when the pair found strong support at about 3,960. It is trading at 4,730, which is slightly below its all-time high of 4,877. It is above the 25-day and 50-day moving averages. At the same time, the MACD and the Relative Strength Index (RSI) have all risen. Therefore, the pair will likely keep rising as bulls target the all-time high. 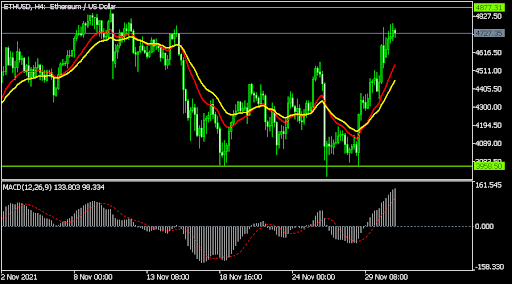 The XAUUSD pair was little changed after the hawkish statement by Jerome Powell. The pair is trading at 1,786, which is slightly above this week’s low of 1,770. On the four-hour chart, the pair has formed a bearish flag pattern. It is also along with the 61.8% Fibonacci retracement level. It has also moved slightly below the 25-day moving average while the Relative Strength Index (RSI) has been rising. Therefore, the pair will likely break out lower. 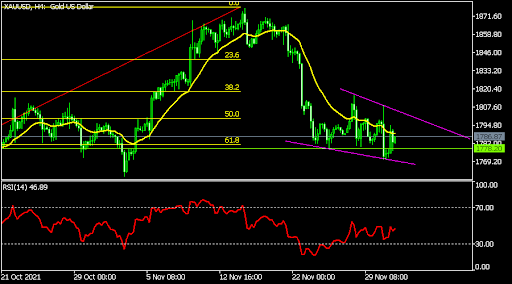 The EURUSD pair was little changed as investors reacted to the Fed Chair statement. It is trading at 1.1328, which is along with the 23.6% Fibonacci retracement level. The pair is along with the 25-day moving average while the Relative Strength Index (RSI) is slightly below the overbought level. The pair will likely keep rising as bulls target the key resistance level at 1.1460. 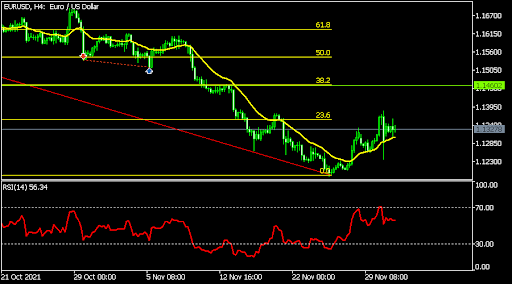 Today we get housing starts and permits, but expectations are running low because of Omicron and bad weather. It’s not exactly an inspiring bit of data, anyway. In fact, the juicy data is from Canada, CPI today and retail sales on Friday. There is still chatter about a BoC hike next week. Remember the BoE can still surprise this week (Thursday), putting both of them ahead of the Fed.