Here are three reasons to expect the Frankfurt-based institution to trigger falls:

This July 22 meeting comes exactly two weeks after the ECB presented its long-awaited strategic review in which it ditched its "Below, but close to 2%" inflation target in favor of just 2%. That is a dovish shift that the bank would want to follow up on, to show it is serious.

However, ECB President Christine Lagarde left market participants somewhat confused when she rejected a Fed-like targeting of average inflation – allowing future price rises to compensate for previous bouts of low inflation. On the other hand, she did say the bank could exceed its 2% target. Clarification is the name of the game, and it could be toward the downside.

Sending clearer messages is another pillar of that strategic review, which is now set to be implemented.

Apart from the theoretical long-term goals, the most recent data suggest price rises are decelerating once again. The headline Consumer Price Index dipped to 1.9% in June, compared with 5.4% in the US. Core CPI edged lower to 0.9% – and has never received a post-pandemic boom. It stands at 4.5% in the US.

Underlying price pressures are nowhere to be seen:

Apart from sending clearer messages about the future, the ECB could act and announce it is extending its Pandemic Emergency Purchase Program (PEPP) beyond March 2022. To appease the hawks, Lagarde may say that an extension of the bond-buying scheme could have a different form.

The most immediate concern is COVID-19 – and the rapid spread of the Delta variant. Infections have been surging in the Netherlands, Spain, and Portugal – but moving higher in other places as well. It threatens to derail the recovery and the ECB's economic forecasts. 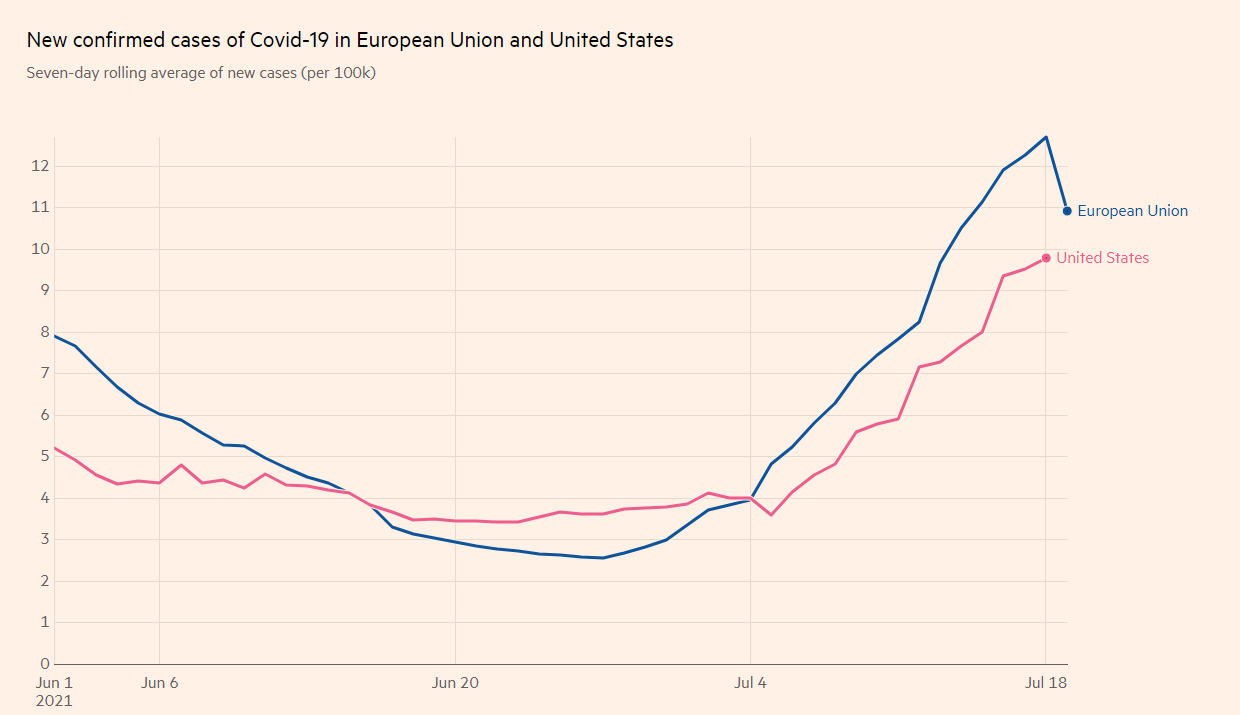 While roughly half the EU's population is fully vaccinated – and 70% of adults have received one-shot – the pandemic is far from over. For countries dependant on tourism, the summer is over before it began. The bank publishes new projections for growth and inflation only in September, but Lagarde could send a warning shot already now.

If she hints that a depressed outlook could warrant further monetary stimulus, the euro would fall.

The ECB's July meeting is the first after the dovish strategic review and the bank could be eager to deliver – or at least promise – looser policy to show it is serious. That is easier amid the severity of the Delta covid wave.

Delta Doom is set to storm America, the dollar could emerge as top do

Gold price is displaying back and forth moves in a narrow range of $1,821.76-1,825.55 in the Tokyo session. The precious metal is trading lackluster right from the first tick on Tuesday. Earlier, the gold prices witnessed a steep fall after failing to surpass the critical hurdle of $1,840.00.