Inflation is high and a rate hike is coming – we just need to wait until the next meeting. Moving slowly is in the old continent´s nature and in the European Central Bank's desire to defend its credibility. The Frankfurt-based institution vowed to end purchasing bonds before raising rates, and communication consistency means predictability. For me, that implies a set of relatively predictable EUR/USD, outcomes.

The ECB last increased borrowing costs in 2011, when higher prices pushed inflation beyond its "2% or close to 2%" target, and then-President Jean-Claude Trichet decided to act with "strong vigilance." It was a total disaster. The eurozone entered a second recession and policymakers have since had to invent new tools to prevent deflation.

Eleven years on, and the world has materially changed. Headline eurozone inflation has hit 8.1% YoY in May, similar to US levels. And while Russia-related energy prices and supply-chain issues are responsible for most of these gains, core prices are also rising in the old continent. These reached 3.8% yearly in May.

The fact that underlying inflation is below 4% in the old continent and 6% in America is a reflection of slower wage growth in Europe and also of the ECB's limits – higher energy prices are already limiting consumers' expenditure on other items. If elevated costs are already curing high prices, there is a limit to what the central bank needs to do to fight inflation.

The price at the gasoline pump and also at the monthly heating gas bill – and of the German industry's dependence on Russian gas – is taking a toll on the economy. 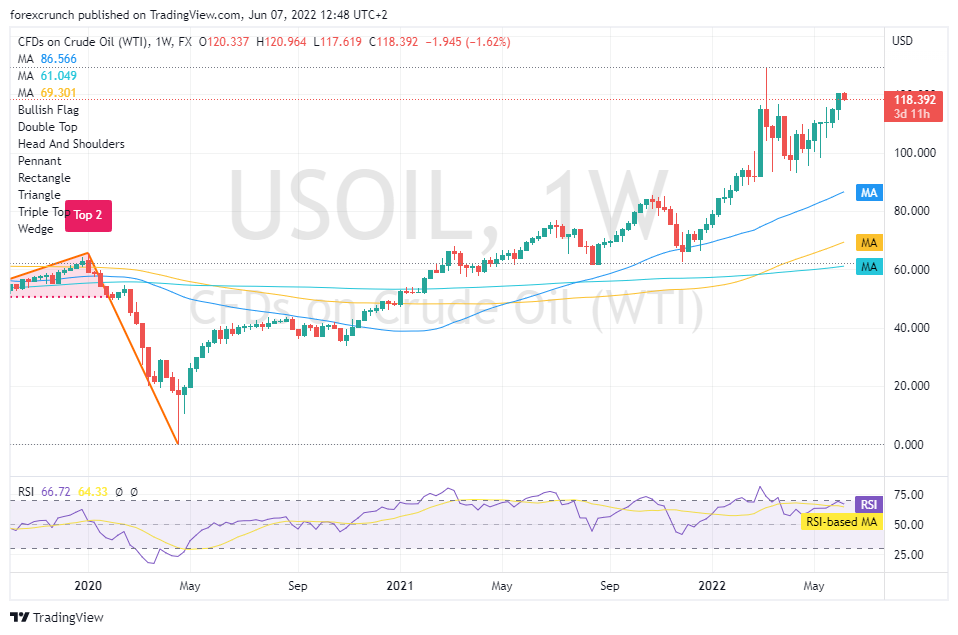 Therefore, the Frankfurt-based institution has a small window to act in order to raise rates. People are still eager to travel after the pandemic lockdowns, as soaring summer airfares have shown, but what happens next is uncertain.

Raising the deposit rate from -0.50% would give the ECB room to cut it back if the situation worsens, and would also stop punishing commercial banks for parking money in Frankfurt.

Let us see what scenarios we can expect.

Despite the narrow window to act, the ECB's insistence on communication consistency means it is only expected to announce the end of bond-buying in July, and pre-announce a rate hike in its upcoming meeting, also next month.

The ECB's balance sheet is at nearly €9 trillion:

There is a low chance that the hawks will convince ECB President Christine Lagarde and other doves to hasten the process and raise interest rates now. In that highly unlikely scenario, EUR/USD would surge instantly on the shock move, but it could also fall as quickly. As our recent experience with the RBA has shown,

if investors see such a quick move as mere front-loading of future moves – and even as "higher rates now, lower in the long run" – any EUR/USD rally would be short-lived. It would even turn into a selling opportunity.

ECB President Lagarde seemed to have ditched her abstract language in recent months, opting instead for clearer messages. Her preferred move is to raise rates by 25 bps in July and then another such move in September, bringing the deposit rate to 0%. Later on, she foresees further increases – but that will have to wait for its due time.

If she indeed reiterates that message, this time in an official rate-setting environment and also based on discussions and forecasts, I expect EUR/USD to decline. That would be a "buy the rumor, sell the fact" response. The common currency's price has such moves fully baked in.

The ECB deposit rate is in deeply negative territory:

Another scenario that cannot be ruled out is that Lagarde leaves the door open to 50 bps hikes, even as soon as July. Such an outcome could be the result of fresh forecasts compiled after the most recent inflation data. If Lagarde says such an option is on the cards and depends on data, the euro would have room to rise.

In turn, a stronger exchange rate would also help depress the costs of imported goods, thus helping to reduce inflation. Moreover, uncertainty about how much the ECB could do in July and beyond would also add to the speculation, further boosting the euro after the dust settles on the ECB decision.

4) Open door and no floor ahead

One caveat about an open-door policy is the ECB's forecasts. Several officials have signaled that GDP growth projections could be slashed in the upcoming meeting, as a result of the war, China's covid-related lockdowns, and uncertainty about the scope of the recovery.

If the ECB says it will either raise by 25 bps or by 50 bps but cut its growth expectations, investors are likely to err on the side of downbeat projections. If the eurozone is set to expand at a slower rate, so is inflation – reducing pressure on the ECB to act.

In such a scenario, EUR/USD would likely end the day lower, as the currency aligns itself with gloomier forecasts rather than with hope for hawkish policy.

The ECB will most likely opt for what it already signaled – a 25 bps hike in July. Communication consistency means "buy the rumor, sell the fact." However, other scenarios cannot be ruled out. The world is moving much faster and even the old continent adapts to shifting sands.