Following the Federal Reserve’s dovish pivot in January, there is a lot of anticipation for the next FOMC meeting on March 19-20 when policymakers will publish their latest economic projections, including a revised dot plot chart. But as the Fed becomes increasingly at ease with its newly-adopted wait-and-see approach, the dovish policy move does not appear to be transmitting into the currency markets, with the dollar index holding close to 1½-year highs.

The greenback was widely expected to weaken in 2019 even before Jerome Powell’s dramatic intervention early in January when he first signalled that the Fed will be “patient” in assessing the need for further rate hikes. The Fed raised rates four times in 2018, driving the dollar index, which measures the US currency against a basket of six of its major peers, up by more than 4%. But while the central bank was always expected to slow the pace of rate increases in 2019, pressing the pause button so soon in January took many market participants by surprise. 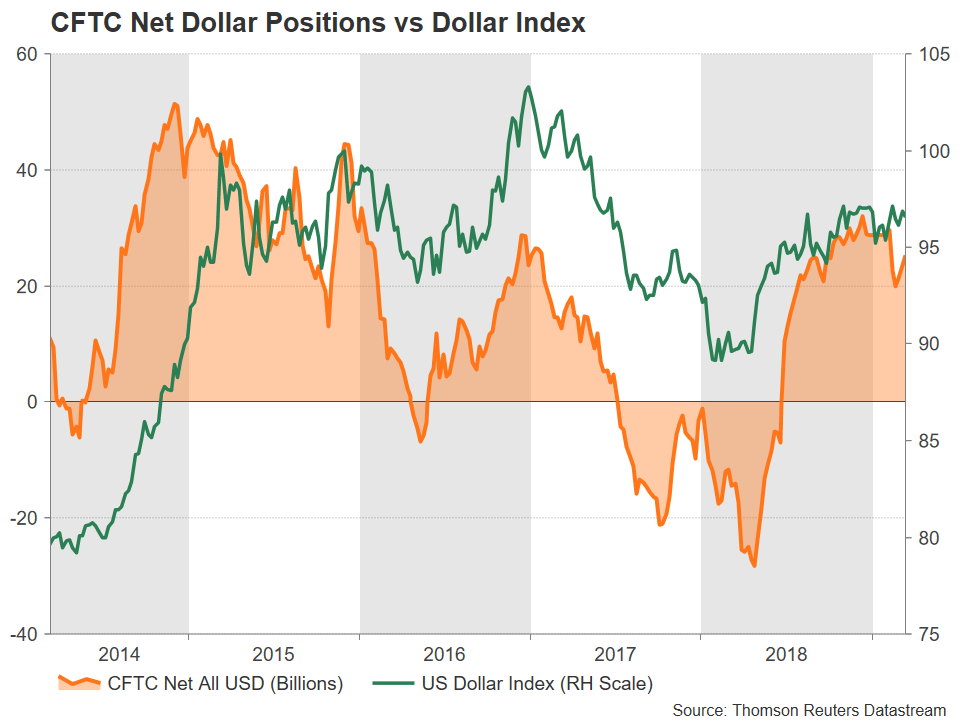 Moderating growth and muted inflation in the United States are some of the concerns of the Federal Open Market Committee, but the biggest factors cited for the policy turn were the sharp slowdown elsewhere in the world as well as the turbulence that shook financial markets at the end of 2018. Heading into the March policy meeting, investors are anxiously waiting to find out how the median projection of the federal funds rate has shifted since the December meeting.

Although Fed officials have communicated a pretty consistent message that the Committee is done with raising rates for now, most remain open to the possibility of resuming the rate hike process later in the year. Whether this will result in a majority of Committee members projecting at least one rate rise in the second half of 2019 remains to be seen but can certainly not be ruled out given policymakers’ public remarks.

Should the FOMC forecasts signal one rate hike in 2019, the dollar would likely appreciate and could reattempt a break above the strong resistance zone between 111.80 and 112.00 against the Japanese yen. Sharper gains are possible, with the 112.60 region coming into view, given that futures markets are indicating a small chance of a rate cut by year-end.

The market pricing of a rate cut suggests investors foresee the US and global economic outlook deteriorating further in the coming months even if they don’t expect the Fed to completely drop its tightening bias just yet. But while it’s likely that the Fed would want to keep its options open regarding future rate increases, it would also not want to upset markets either by signalling that rates may still be raised later this year.

Should the Fed surprise investors with an overly cautious set of growth and inflation projections and predict no more rate increases, the dollar could seek support again from the recently congested area of 110.75 area before testing the key psychological level of 110.00.

However, an FOMC statement and set of projections that are more aligned with the market’s view than what some analysts are anticipating at the moment would not necessarily guarantee a weaker dollar, at least not in the medium term. Although in January the Fed made one of its largest policy reversals in its history, the move still leaves it as one of the more hawkish central banks amongst the major economies globally.

Investors may have substantially downgraded their outlook for the US economy in recent months but with the rest of the world stuck in the doldrums, US assets remain relatively attractive and that would probably limit how far the bears would be able to pull the dollar lower.

One of the biggest disappointments in 2018 was the Eurozone’s lacklustre performance and the economy has yet to reach a turning point. Until clear signs of a rebound start to appear, the euro’s fortunes are unlikely to change and that would mean little downside for the dollar index where the single currency constitutes about 58% of the index’s weighting.

For the index to break out of this range in either direction, there would have to be significant developments on the growth front in the euro area as well as in the US’s other main trading partners that make up the index such as Japan, Canada and the UK. With growth stuttering in all of those countries, it didn’t take long for their respective central banks to follow the Fed with a dovish tilt, partially offsetting the negative effect of the Fed’s policy shift on the US currency.

Should growth in those regions begin to bounce back, particularly if the immediate threats from trade tensions and Brexit were to recede, the downside risks for the dollar would start to increase. An improving economic picture outside of the US remains the best bet for the greenback to depreciate, as even if the American economy was to continue losing steam, its fundamentals still look much better than its competitors’, so a severe downturn appears unlikely at this point.

In fact, it could be argued that a strengthening in US economic momentum is a not only a more probable scenario than a deep slowdown in the domestic economy but also more likely than a solid rebound in global growth. Should the Fed be forced to make another U-turn by resuming its tightening cycle, the dollar could end up finishing 2019 with year-to-date gains, especially if any recovery in other parts of the world lags growth in the US.

Another upside risk for the greenback is a collapse in the US-China trade talks. The US dollar has been behaving as a safe-haven in the Sino-US trade story but has seen an unwinding of safety flows as optimism grows that a deal between the two trading powers is within reach. A break down in the trade talks could see safe-haven demand returning to the greenback, pushing the currency higher against its peers that don’t enjoy a similar status.

Ultimately, given the current state of the world economy and the headwinds facing it, Fed policy may not play as big a role in the dollar’s direction in 2019 as developments outside of the US, as well as of course President Trump’s stance on trade.

AUD/USD remains under pressure around 0.6720 with eyes on RBA minutes

AUD/USD declines to 0.6713 at the start of Tuesday’s Asian session. In doing so, the Aussie pair registers the fourth consecutive negative day and coronavirus is the catalyst to blame. Traders are now awaiting fresh clues from RBA minutes, up for publishing at 00:30 GMT, for near-term direction.