One of the biggest worries some people for the stock market is that baby boomers retiring will take money out of the stock market causing valuations to fall from their current lofty heights. Obviously, the next generation will put money into stocks eventually, but in the next few years there will be an increase in retirees, which means a larger than usual amount of capital will move from stocks to bonds or other safe investments. The chart below shows the next generation won’t be able to put the same amount of money in the market for retirement as the previous one. As you can see, the big difference between the baby boomers and the silent generation is that less baby boomers were in the armed forces. The difference between the baby boomers and generation x is that less were in the military, less were unemployed, and more weren’t in the labor force.

These are all relatively small changes compared to the big shift in the labor market for millennials which is the big decline in the percentage of 18-33 year olds who are employed. The people moved from the labor market to being unemployed and not in the labor force. This giant increase in the “not in the labor force” group makes America look like Greece as there’s a big decline in the number of tax payers as the underground economy flourishes. The millennial generation is on track to becoming the most educated generation ever in terms of the percentage of kids going to college. However, they can’t find jobs as the manufacturing jobs are long gone. The next entry level job to go by the wayside is restaurant servers. A computer can easily replace them which would make it tougher on the next generation. The less employment, the less money which gets put into retirements which are the principle way people get exposure to the stock market. There are apps that millennials use to save a few dollars which go into ETFs, but that’s nothing compared to the money baby boomers have. 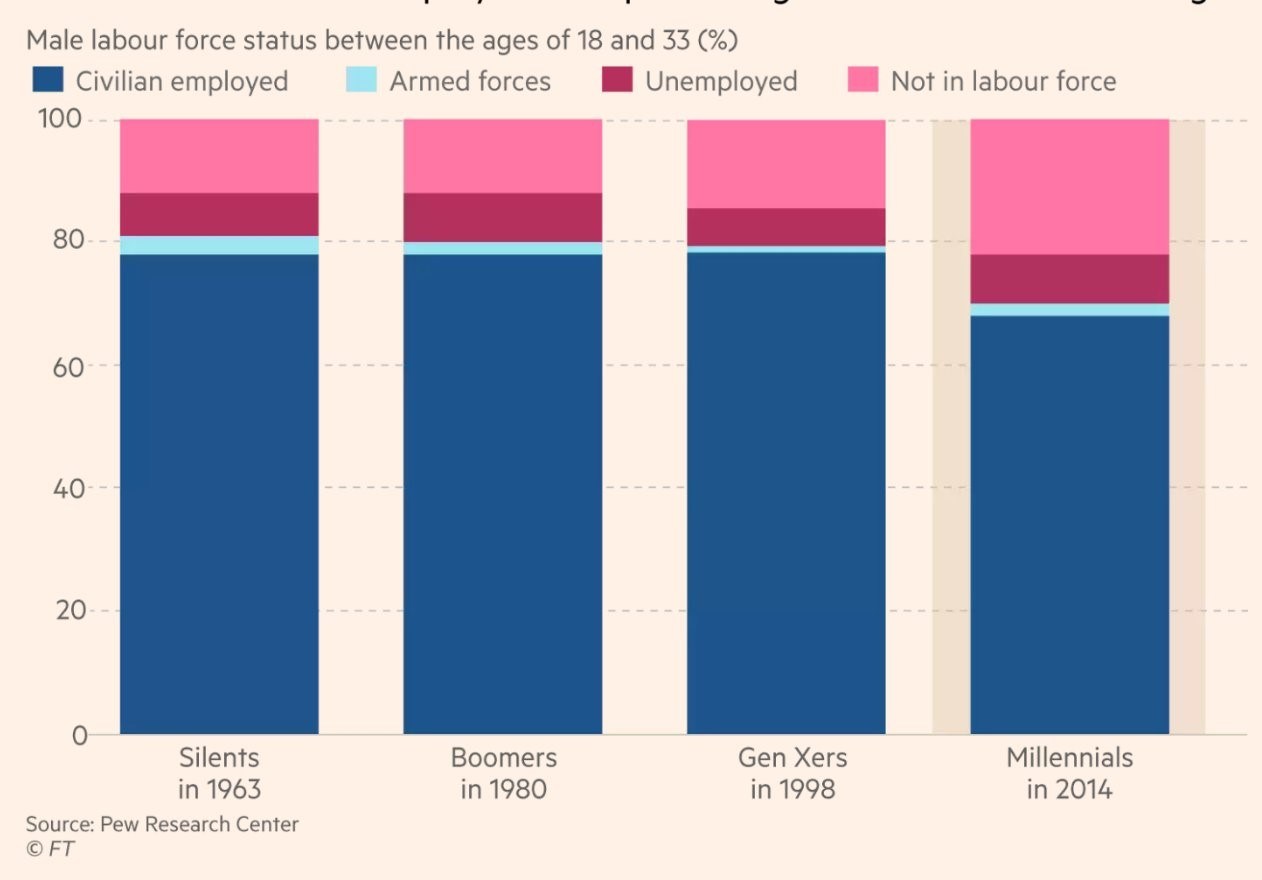 Small Caps In A Tough Position

Another trend which I have harped on in many articles is the growing divide between the small caps and large caps. Large caps have had increased profit growth. The number of stocks traded has fallen in the past few years which means less small firms have access to capital in the public market, making it easier for large firms to compete. Another helpful advantage for large caps is they get come investment from the central banks. The central banks aren’t specifically trying to help large caps, but large caps are the most liquid, so that’s what they choose. The chart below looks at the debt to cash ratio of small caps, mid-caps, and large caps. Interestingly the mid-caps are doing the worst as they have the highest ratio which is 4.8. The small caps debt to cash ratio is 21.4% higher than the large cap ratio. Despite this, small businesses continue to hire workers aggressively. Clearly, there’s a difference between a small business with 12 workers and a $1 billion small cap firm, but the trends have been similar. 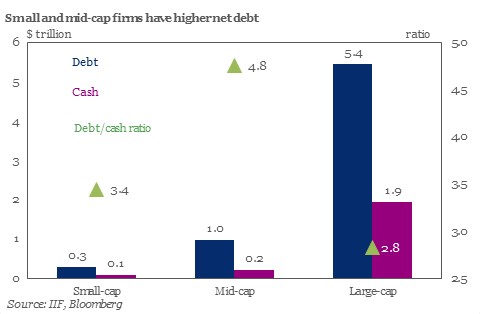 Central Banks Will Hit The Pause Button In 2018

The chart below is evidence of the large increase in corporate debt buying from the European central bank which mostly goes into large caps. It’s a remarkable trend which goes up and to the right perfectly. Looking at this chart makes the prospects of this policy ending seem ludicrous. However, the chance of it ending isn’t ludicrous because the ECB is running out of bonds to buy, so this program will be winding down in 2018. The effect on the market will be interesting. The date of the announced decline in bond buying is sometime in October. 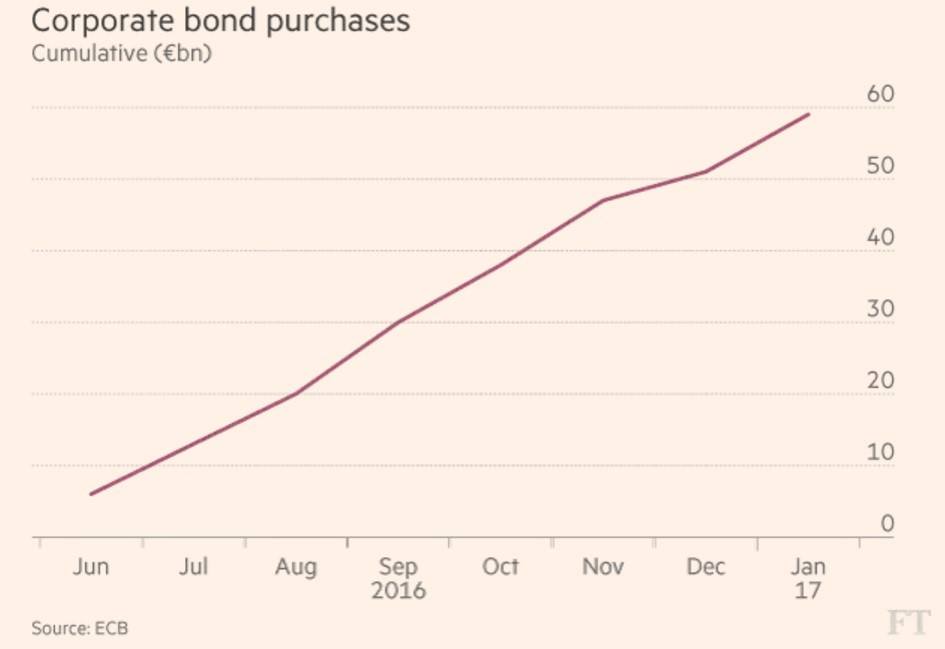 The BLS non-farm payrolls is reported on the first Friday of the month which is this week since September 1stis a Friday. Since the ADP report always comes out on the Wednesday before the report, that meant we got the August private labor report on August 30th. As you can see from the chart below, the labor market remained strong in August as 237,000 jobs were created. This is good news for the BLS report on Friday. The large firms had an amazing month creating 115,000 jobs. The small businesses created 48,000 jobs and mid-sized firms created 74,000 jobs. I think in the next 5-10 years we will be seeing more jobs created from large firms as the economy transforms away from small businesses because of harmful regulations and central bank manipulation. This result could be the start of that, but it’s likely statistical noise. Services dominated the job creation as they added 204,000 jobs while goods producing sector added 33,000 jobs. Construction added 18,000 jobs. I’m interest to see what happens next month as the construction needed in Texas will be massive. Information technology saw a 3,000 dip in jobs which is surprising considering how good the tech sector is doing. It was the first decline since May. It’s certainly not a labor-intensive sector which is why companies are able to sport such high margins. 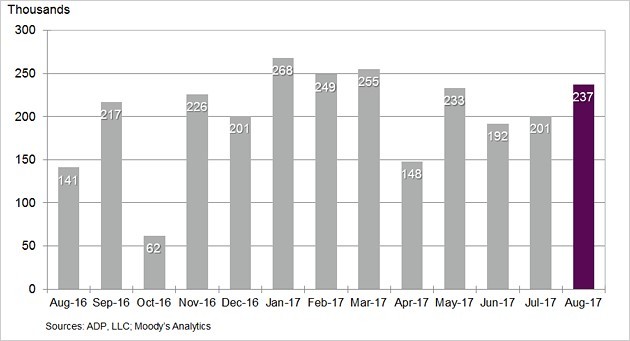 Another report which was released was the MBA mortgage application data. The composite index was down 2.3% week over week. The purchase index was down 3.0% and the refinance index was down 2.0%. This isn’t that big of a deal because it’s weekly data. There have been three straight weeks of weakness, but I need to see more to start to get worried as the data is volatile. The final economic report that was released on Wednesday was the after tax corporate profits. The growth rate took a sequential decline as it fell to 8.1% from 11.5%. That’s based on the tougher year over year comparisons. Corporate profits are very close to the all-time high set in 2014. The S&P 500’s trailing twelve-month profits are also very close to a record. If you look at the quarterly results, profits already are at a record as the large caps are doing better than the small caps in this economy.