The price of crude oil was little changed as the market continued reflecting on the coordinated release of strategic reserves (STR). The market believes that the release of these reserves will not push prices lower since it was smaller than expected. Meanwhile, according to the Wall Street Journal, top OPEC+ members were considering a move to pause their recent efforts to increase production. Russia and Saudi Arabia are supportive of the measure in a bid to maintain higher prices. On the other hand, some members like the United Arab Emirates (UAE) believe that the strategic pause will not be needed.

US stocks declined sharply after strong economic data from the United States. These numbers signalled that the Federal Reserve would move to tighten conditions faster than expected. Data showed that initial jobless claims declined to the lowest level in more than 50 years. Other numbers revealed that household incomes rose slightly in October even as spending jumped. Similarly, the country’s trade deficit narrowed while durable goods orders jumped. A hawkish Fed tends to be bearish for stocks.

The euro declined slightly after Germany got a new government, the first in 16 years. This happened after social democrats, greens, and liberals agreed to form the so-called ‘traffic light’ government. Olaf Scholtz will become the new chancellor while the greens and liberal democrats will get five and four ministerial posts each. This centre-left government will be the first such alliance in history. The currency will react to the latest German GDP data. The numbers are expected to show that the economy expanded by 2.5% in the third quarter. Another catalyst will be the latest minutes of the European Central Bank.

The EURUSD pair has been in a strong bearish trend in the past few weeks. It is trading at 1.1190, which is the lowest level since June last year. The pair has moved below the 25-day moving average. At the same time, the Average Directional Index (ADX) has risen to 45, signalling that the bearish trend is still strong. The RSI and Stochastic have also moved to the oversold level. Therefore, the sell-off will likely keep falling today. 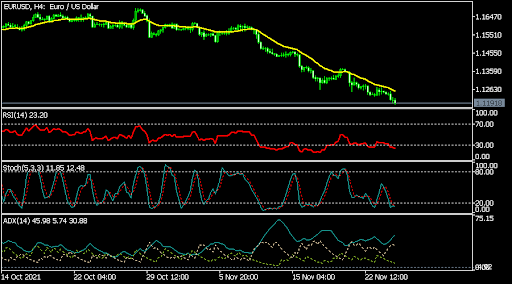 The GBPUSD pair broke out below the bearish flag pattern earlier this week. It then continued the sell-off and managed to move below the key support at 1.3354, which was the lower side of the flag post. It has moved below the 25-day moving average while the MACD has moved below the neutral level. The RSI has also dropped below the oversold level. Therefore, the pair will likely keep falling for now. 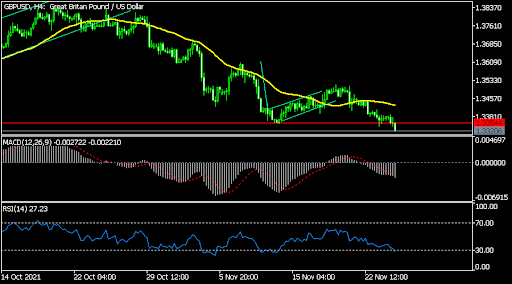 The Dow Jones declined slightly after strong US economic data. The pair is trading at a key support level at $35,690. This was the highest level on August 13th. It is still above the ascending trendline and the 50-day moving average. The Relative Strength Index (RSI) is also pointing lower. The index futures will likely see little action today as the US celebrate the Thanksgiving holiday. 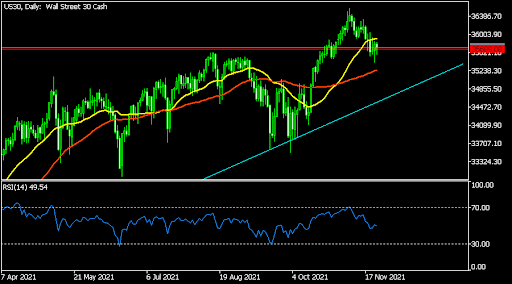