The US consumer is in a funk. Jobs are plentiful, but hiring is scarce. Retail Sales are strong but inflation is soaring. The cost of filling the family SUV has rocketed more than 60% in 11 months.

Consumer attitudes plunged at the end of the summer and have not recovered despite more unfilled employment in July and August than in any two months on record.

The Consumer Confidence Index from the Conference Board (CB)  is expected to drop to 108.3 in October from September’s 109.3.

Michigan and Conference Board Indexes

The Michigan Index was the first to describe the collapse in US Consumer Sentiment. The August reading plummeted to 70.3 from 81.2 and has not rebounded. September bounced slightly to 72.8 but October’s reversed to 71.4.

Consumer Sentiment in the Michigan Survey has averaged 71.5 for the last three months. That is weaker than the 74.1 average in April, May and June last year at the height of the pandemic panic.

The Conference Board Consumer Confidence Index, whose monthly release comes about two weeks after Michigan, has reported the same decline in outlook. August’s reading fell to 115.2 from 129.1 in July. September continued lower to 109.8. The close congruence between the two surveys is understandable and predictive. 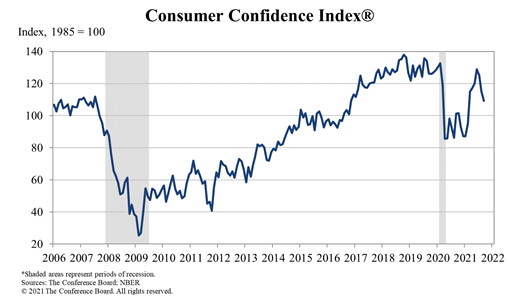 The wide disparity between payroll hiring and available jobs is one of the oddities of the pandemic economic recovery.

In every month from March to August the Job Offerings and Labor Turnover Survey (JOLTS) of unfilled positions set a new record. Topping out at 11.098 million in July, more than 3.5 million more than the prior record of 7.574 million, the huge number of jobs going begging has had no effect on hiring.

In the six months from March to August JOLTS averaged 9.781 million jobs and NFP hiring was 681,200.  Annual wages were also rising sharply in that period, from 0.4% in April to 4.6% in September.

Initial Jobless Claims were declining, with the four-week moving average dropping from 762,250 in the first week of March to 356,250 in the last week of August and then to 319,750 in the middle of October.

Based on these figures, all traditional and until now, reliable measures of labor market conditions with secure positive correlation to consumer attitudes, it would be next to impossible to have predicted the late summer collapse and continuing trough in consumer attitudes.

Retail Sales are a second indicator that has gone somewhat awry.

The standard correlation, and indeed the main interest of consumer outlook indexes, is as an indicator for the 70% of US economic activity tied to consumption.

It is a straightforward relationship. When consumers are happy, a state mostly defined by the ability to find or replace work, they spend freely.

August’s tumble in Consumer Sentiment to 70.3 from 81.2 in the Michigan Survey was thought to presage a concomitant drop in consumption. Retail Sales were forecast to fall 0.8%. Instead sales climbed 0.9%, the best since April. September’s expectations were muted but still negative at -0.2%. Again, consumers belied their own supposed attitudes and spending rose 0.7%.

Soaring consumer prices, especially of gasoline, are  the most likely source of consumer discontent.

In September, the headline Consumer Price Index (CPI) rose 5.4%, its highest rate in 13 years. In seven months CPI has more than doubled from 2.6% in March.

For most American families, and in the vast majority of their endeavors, gasoline is a wholly inelastic commodity. When fuel costs rise, Americans don't drive less, they pay more.

A gallon of regular gasoline is up 61.5% over the past eleven months, 49% since January 1, 37% from the first of March and 6% since September 1. These are increases that cannot be substituted or ignored, only paid, and likey derided.

The price of a barrel of West Texas Intermediate, (WTI) the North American oil pricing standard, has continued to rise with some of the steepest increases being the most recent. Since August 20 WTI has added 34.9%, from $61.82 to $83.23. That is more than sufficient to insure that gasoline prices will keep climbing through the New Year. 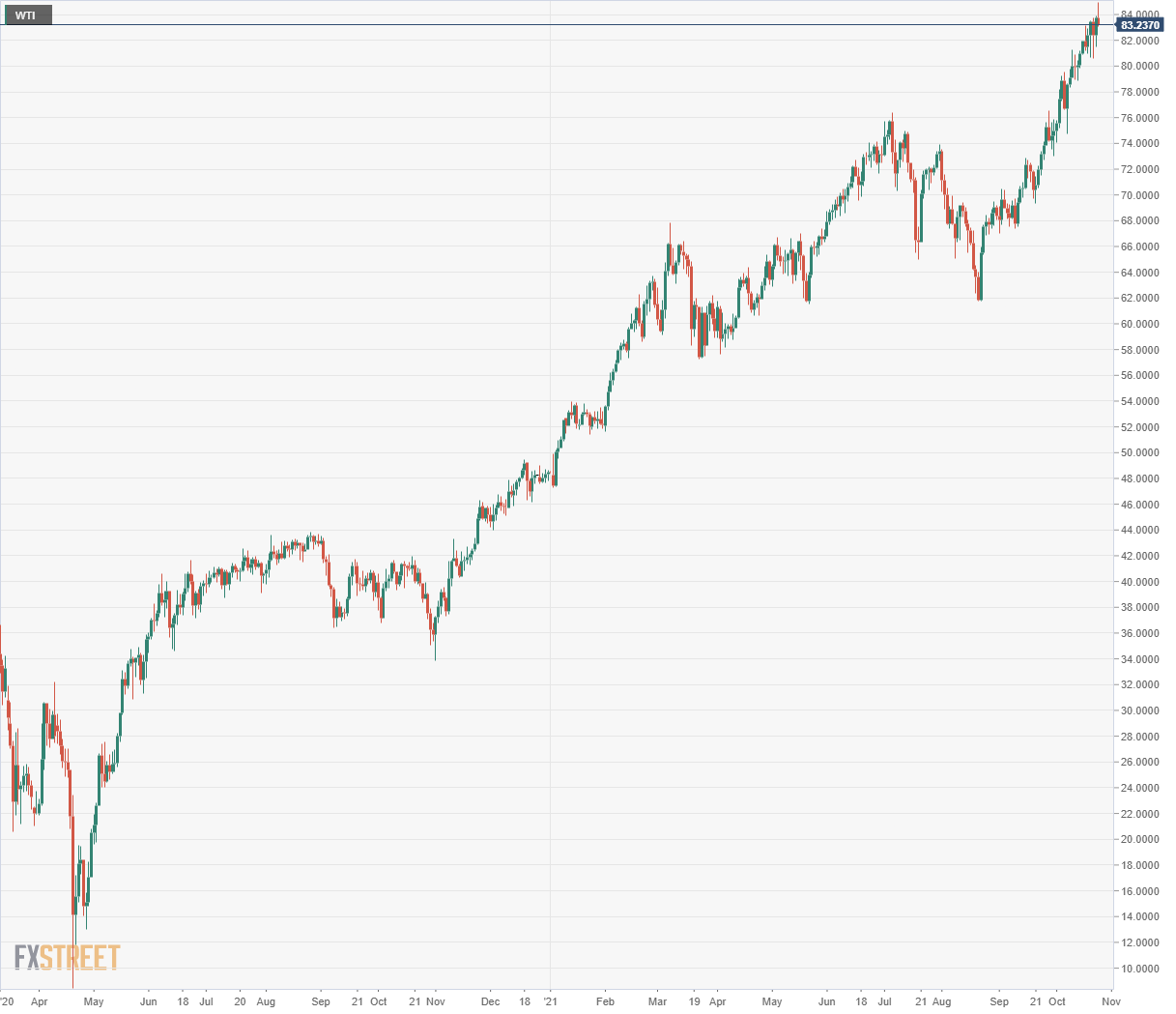 Markets are focused on the Federal Open Market Committee (FOMC) meeting next Wednesday. Expectations are high that the Federal Reserve will announce the schedule and amount of the long-bruited reduction in its emergency bond buying program. Cuts in the $120 billion a month of purchases are predicted to begin before the end of the year.

In anticipation of that policy shift, US Treasury rates have climbed sharply. Since the last FOMC on September 22 the yield on the 10-year Treasury note has added 31 basis points to 1.633%. Mr. Powell’s reference to the raising the fed funds rate, though, is the answer to a question no one is currently asking.

Nothing that US consumers say through the confidence and sentiment indexes will have the slightest effect on the Fed’s decision next week.

One reason is that consumers themselves are ignoring the historical association of weak sentiment scores with low spending. Another is that the job market is booming with a near record number of positions available.

There is little or nothing that Fed monetary policy can say to millions of workers who, it seems, prefer not to work.