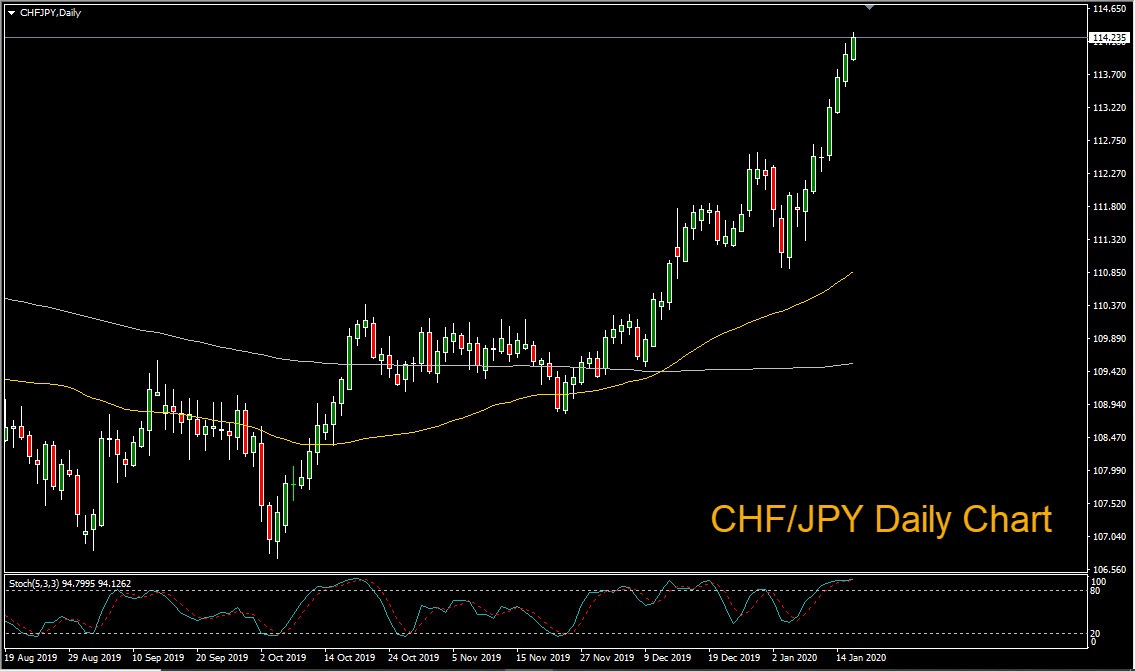 CHF/JPY soared to its highest levels since December of 2018 in early trading on Thursday. The CHF/JPY currency cross (a pair that does not include the US dollar) is made up of two major financial safe-havens.

The Swiss franc reached long term highs against its major rivals after Switzerland was added to the US Treasury’s watch list of currency manipulators on Monday. The Swiss National Bank (SNB) has previously bought large quantities of foreign currencies to contain demand for the franc.

The inclusion in the US Treasury watch list may discourage the SNB from intervening to attempt to limit further appreciation of the franc. The SNB said that interventions are “not aimed at conferring advantages on Switzerland by undervaluing the franc.”

Meanwhile, the Japanese yen fell to its lowest levels in 8 months this week after Washington removed China from its list of of currency manipulators, fueling risk-on sentiment in the market. The yen was also pressured by dampened safe-haven demand after tensions between the US and Iran cooled and the US and China signed a long-awaited trade deal on Wednesday.

The ‘phase one’ deal between the world's largest economic powers reduced some US tariffs on Chinese goods in exchange for a commitment from China to purchase more American agricultural, energy and manufactured goods. Additionally, the deal included provisions on intellectual property enforcement and protections. Analysts have suggested that there may be little progress on 'phase two' talks before the US presidential election in November.

The markets cheered the trade deal news with major US stock indices reaching record highs on Wednesday. The Dow Jones Industrial Average closed above 29k for the first time and broader S&P 500 index also closed in record territory. Investors now look to the US retail sales report due for release later on Thursday for further insight into the health of the US economy.

Trading Futures, Options on Futures, and Foreign Exchange involves substantial risk of loss and may not be suitable for all investors. You should carefully consider whether trading is suitable for you in light of your circumstances, knowledge, and financial resources. You may lose all or more of your initial investment. Opinions, market data, and recommendations are subject to change at any time.