The USD/CAD has been almost flat this week awaiting the rate decision by the Bank of Canada (BoC). The central bank is expected to raise the benchmark rate to 1.25 percent in what could be the first of three rate hikes in 2018. The BoC governor will host a press conference at 11:15 am to give more details behind the monetary policy decision. Unlike the July rate hike in 2017 Canadian policy makers have not telegraphed the decision, but markets have priced in a 86 percent probability. While Poloz has surprised in the past, he has avoided outright wrong footing the market. 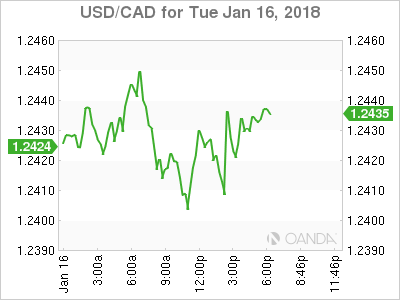 The USD/CAD is flat at a 0.02 percent loss on Tuesday. The currency is trading at 1.2425 ahead of the Bank of Canada (BoC) rate statement on Wednesday, January 17 at 10 am EST. The loonie was stuck in a tight range and is trading near where it opened this morning.

The Bank of Canada (BoC) is worried that lifting rates too fast could hurt Canadian households with record levels of debt as well as taking out one of the main engines of growth of the economy, the housing sector. Also under consideration is the uncertain fate of NAFTA. The treaty has been under assault from President Trump ever since he was a candidate and he has followed through on his America First mandate which has hampered the renegotiation talks that have progressed with little to show. The next round will take place in Montreal on January 28.

The Canadian economy had a great year in 2017, defying expectations of growth and employment. There were signs of a slowdown toward the second half, but the December jobs report on the back of a solid November employment data started on a positive note for the loonie. The Canadian currency is up 1.2 percent against the USD year to date. The US dollar has not been able to gain momentum after the passing of tax reform and December rate hike were already priced in and left investors with few clues going into 2018.

A rate hike will benefit the CAD, but how much is hard to tell. Under normal circumstances the rate announcement would mean closing the gap between US rates and with better fundamentals the CAD should appreciated, but given the situation of the NAFTA negotiations it could have less of an impact. The talks in Montreal are been considered as a make or break meeting. There has been little to show on most fronts and with upcoming elections in Mexico and the United States it could be heavily politicized ending up in its demise. The loonie is not anticipated to rise as sharply if the BoC follows through with a rate hike given the NAFTA uncertainty with ongoing negotiations. 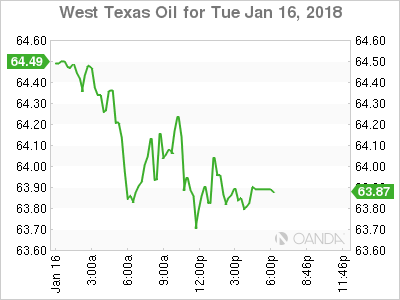 Energy prices dropped in the last 24 hours. The West Texas Intermediate is trading at $63.87 after traders booked profits after a sustained rally. The price of oil went at high as $64.80 near Monday’s close before falling to current levels. Stronger than expected demand has kept price close to $70. The battle between the Organization of the Petroleum Exporting Countries (OPEC) who agreed to cut production with other major producers and US shale producers drags on with the cut in supply receiving a boost by weather disruptions. US shale has not hiked production as fast as originally thought, specially considering rising prices. OPEC members and major producers have kept their production in check with the added bonus that any supply hiccups will help their cause.

Russian compliance was a concern going into the OPEC cut agreement extension but the comments from Energy Minister Alexander Novak was very supportive of the cuts and the need to keep them for longer until the oil market is balanced. The main difference between this rally and others in the past two years is that it not fuelled mainly by statements from producers, but instead has the backing of strong fundamentals. Energy imports have increased 1.8 percent in India and other developed countries have increased their appetite for the black stuff.

Threats remain with some analysts not convinced that the current conditions are sustainable. The OPEC are dealing with a potential breakdown if Saudi Arabia, Iran and Iraq continue their ideological disagreements. Disruptions are short lived and rising US, Brazil and Canada production could soon offset the wins of the oil supply cut agreement as they move in to benefit from higher prices.

Market events to watch this week: