The BoE left policy on hold, but there was dovish dissension in the ranks of the nine-member Monetary Policy Committee. Members Saunders and Haskell voted in favour of cutting the repo rate by 25 bp from 0.75%, arguing that the labour market has turned and that global headwinds are growing. The minutes of the meeting showed that Brexit developments have been greeted positively, with no-deal risk now much reduced, removing some of the uncertainty facing UK businesses and households. The MPC also noted that fiscal policy will become easier in 2020, and that it expects there to be a modest improvement in global growth. The BoE also released its quarterly Inflation Report. The central bank trimmed growth projections, expecting GDP to be 1 percentage point lower at the three-year horizon than forecast in its previous Inflation Report in August. Inflation forecasts were also lowered, with CPI seen at 1.51% at the one-year horizon (down from 1.90% forecast in August), and at 2.03% at the two-year mark (versus 2.23% before) and 2.25% at the three-year horizon (prior 2.37%). The BoE stressed that its forecasts are based on the assumption of an orderly transition to a “deep” free trade agreement between the UK and EU. Watch this space.

Cable printed a 10-day low under 1.2800 while EURGBP has scaled to a three-day peak on the back of Pound weakness.  Cable was further pressured when the US weekly jobless claims fell 8k to 211K in the week ended November 2, more than expected, after rising 6k to 219k (was 218,) in the October 26 week. That pushed the 4-week moving average up to 215.25k from a revised 215k (was 214.75k) previously. Continuing claims slipped 3k to 1,689k in the October 26 week after the 9k increase to 1,692k (was 1,690k) in the prior week. The insured unemployment rate was steady at 1.2%. Claims were at a 50-year low in the April 12 week at 193k, and have remained in at remarkably tight levels, having revealed little impact from the UAW strike or trade/growth uncertainties. 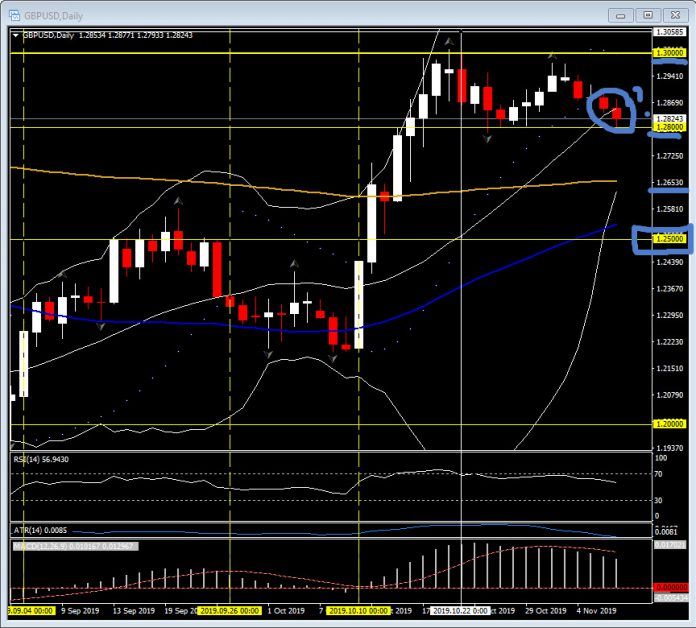 The move lower for Cable today has also breached the 20-day moving average for the first time since the October 10 & 11 inspired rally and subsequent UK-EU Brexit deal. The 20-day moving average sits at 1.2850, today’s close will be interesting. RSI (56) is declining and the MACD histogram, although positive  has been below the signal line from October 29.