Japan’s CPI on the soft side (by Yann Quelenn)

Japan’s September national CPI was released last night and was perfectly in line with expectations at -0.5% y/y. No upside surprises have taken place and the Japanese economy remains largely in deflation. Energy prices are also stalling below $50 a barrel, however upward pressures are fading. Markets are not expecting yet further action to come out of next week’s BoJ monetary policy meeting. The BoJ is now shifting policy framework targeting Japan’s yield curve.

The central bank has reached its limit in terms of its effectiveness, having exhausted the tools at its disposal. We believe that the volume of asset purchases cannot be increased or the BoJ will have to further deepen its negative interest rates. On top of that the central bank now owns around one third of outstanding Japanese Government Bonds.

As a result, upside pressures on the yen should continue. In our view, helicopter money is clearly the next step for Japan. The BoJ is now praying that the Fed will raise rates in December which would reduce upside pressures on the yen. However, a December Fed rate hike is already quasi priced in by markets so the BoJ is actually waiting for a continued normalization of interest rates. The future does not seem bright for the island nation.

After rallying in the first part of the week, the Brazilian real came quickly under pressure as the positive effects stemming from the approval by the lower house of the constitutional amendment to cap spending on social welfare faded away. The unelected and very unpopular president, Michel Temer, was able to count on support from the entire political class to pass the PEC 241 at the Chamber of Deputies. The measure, aimed at limiting the growth of public spending to the rate of inflation of the previous twelve months will likely hurt the most disadvantaged Brazilian citizens as it will significantly reduce health and education programs, from school funding to disease prevention.

Temer’s manoeuvre will most likely please financial markets in the short to medium-term as it will help to shore up Brazil’s finances. However, on the longer term, these public spending cuts could be seen as a cut in investment, which would eventually weigh on the potential growth outlook.

On the data front, the last mid-month inflation report showed that inflationary pressures have eased slightly in October, softening from 8.78%y/y in September to 8.27% in October and beating the median forecast of 8.29%. In the COPOM, minutes released last Tuesday, in which its trim interest rate by 25bps, bringing the Selic rate down to 14%, the Brazilian Central Bank (BCB) emphasized the need for caution in monetary easing as inflationary pressures remain strong. The easing will likely be slow and gradual, which will provide the BRL with solid demand as traders ride the carry trade. The Brazilian real was down 0.80% on Thursday. USD/BRL closed at 3.1665. 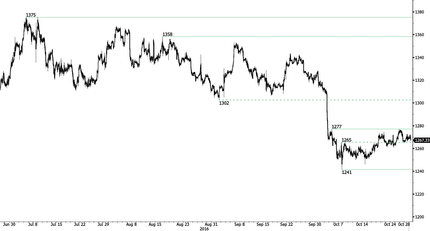 WTI keeps upside break of 61.8% Fibonacci retracement, nears highest in nine months. OPEC struggles to agree over output even as some participants back a delay in the production hike.