No more non-events – the Bank of England's "Super Thursday" has been having a notable effect on the pound – to the downside.

The BOE has left interest rates unchanged and downgraded forecasts – both as expected. However, the following three developments came as a surprise and may have a substantial downside impact on sterling.

Two members of the Monetary Policy Committee (MPC) have voted in favor of a 25 basis point rate cut. After many unanimous decisions, this pattern has been a downside surprise on its own. However, the greater shocker is that one of these dissenters is Michael Saunders.

Saunders has been one of the proponents of raising rates in the past but has recently expressed concerns. He has now fully moved to the dovish camp. His shift creates a void among those supporting a tighter monetary policy, and its impact is amplified by the upcoming departure of Governor Mark Carney. The new governor – may be a dove or a hawk – is set to inherit an MPC leaning toward looser decisions.

Worries about Brexit uncertainty, the slump in investment, and manufacturing contraction are not news. But now, the BOE has also been warning about the labor market. With the unemployment rate standing below 4% and close to historic lows, the bank's concerns are especially depressing.

What does the "Old Lady" know that markets do not know?

The BOE's caution around jobs may be related to its observation that consumption has cooled down. If consumers join manufacturers in dragging the economy down, a UK recession cannot be ruled out.

Around global growth, the central bank seems to be catching up with its peers. It has noted contracting global PMIs, headwinds from trade – and the limited firepower of central banks. The tone around uncertainty – including home-grown Brexit fogs – has been upgraded. The bank seems to accept that damage has been done.

The BOE has been one of the more optimistic central banks, and now it is gone.

The pound has already lost ground in reaction to the bank's "Super Thursday" punch – and fresh falls may continue.

GBP/USD has dropped below uptrend support.

Brexit headlines have been in the driving seat for sterling – and the current market-mover is related – the December 12 elections.

Nevertheless, sterling has also been moving in response to economic figures and the central bank's policy. The BOE and its optimism have been supporting the pound – and now it is gone. That is why there is more room to the downside. 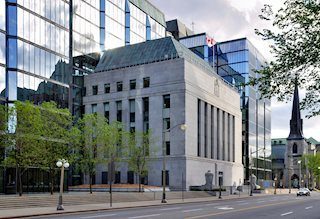