Australia will release  Q4 inflation estimates early Wednesday. Quarterly inflation is expected to have risen by 0.6%, slightly better than Q3 0.5%, while yearly basis,  the CPI is seen unchanged at 1.7%. The RBA Trimmed Mean estimates are seen at 0.4% QoQ and 1.5% YoY, this last down from 1.6%.

The RBA and inflation

At the mentioned levels, Australian inflation will hardly affect the Reserve Bank of Australia's monetary policy. The RBA is probably waiting for these numbers to asset the impact of its rate cuts that sent the key rate down to 0.75%, a record low. According to the market’s expectations, it seems policymakers will have to keep on waiting.

After Governor Lowe said that the economy has reached a “gentle turning point,” odds for a rate cut in the upcoming February meeting decreased. Even in case of inflation missing the market’s expectations, it’s likely that the RBA will maintain its wait-and-see stance. Nevertheless, a discouraging reading will likely affect the Aussie negatively, as the market will start pricing in a rate cut later in the year.

Worth noting that the central bank’s inflation target is 2%-3% and that it has been below the mentioned target for most of the last few years. The next RBA  monetary policy meeting is scheduled for February 4.

Upbeat readings, on the other hand, could lead to a modest recovery of the Aussie, but given the ongoing dollar’s strength, a sustained advance seems unlikely. The fact that the US and China reached a principle of an agreement on their trade relationship has been overshadowed by the coronavirus outbreak. Chinese woes tend to keep the Australian currency under selling pressure.

The AUD/USD pair is trading in less than 100 pips above a multi-year low of 0.6670. Technical readings in the daily chart favor another leg lower although the length of the latest slide increases odds of an upward corrective movement.

The immediate support area comes at 0.6720, en route to the mentioned 0.6670. Large stops are suspected below this last, and if those get triggered, the slump may accelerate toward the 0.6600 figure.

An immediate resistance level is 0.6770, followed by the 0.6800 figure. If the pair recovers above this last, it could extend its advance up to 0.6850 before starting to ease. 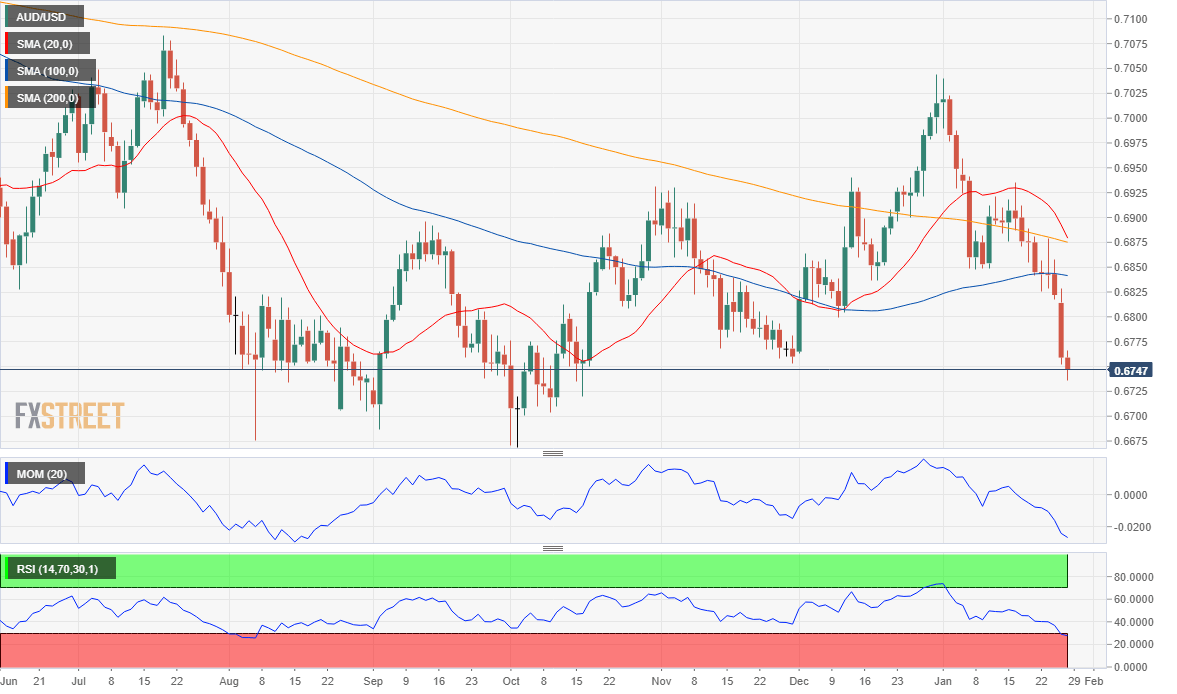