The AUD/USD came close again this week, pulling up to 0.7806 on Thursday just shy of the three year high of 0.7820 from January 6. Friday's pullback to support at 0.7700 is not rejection of the overall upward trend that goes back to April, but it may be sign that profit-taking is underway on the very steep ascent from the beginning of November. 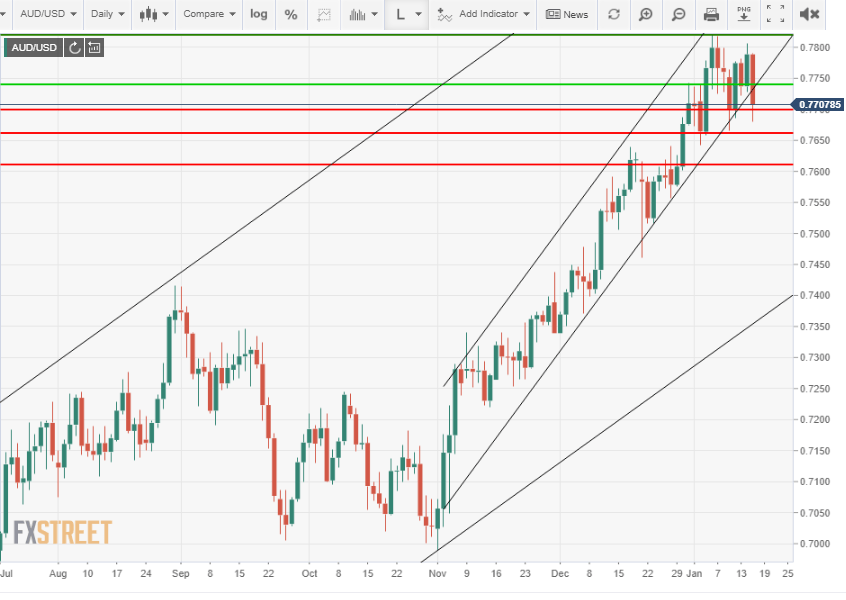 The basic logic for the AUD/USD is that of the commodity complex in anticipation of a global recovery as the pandemic relents.That scenario still holds as the final arbiter for 2021 despite the setbacks in pandemic control of varying degrees of seriousness in the US, Europe and China.

The aussie has been more than 40% higher against the US dollar in the last decade than it is now and a full-tilt global expansion would provide many opportunities for the resource driven Australian economy. 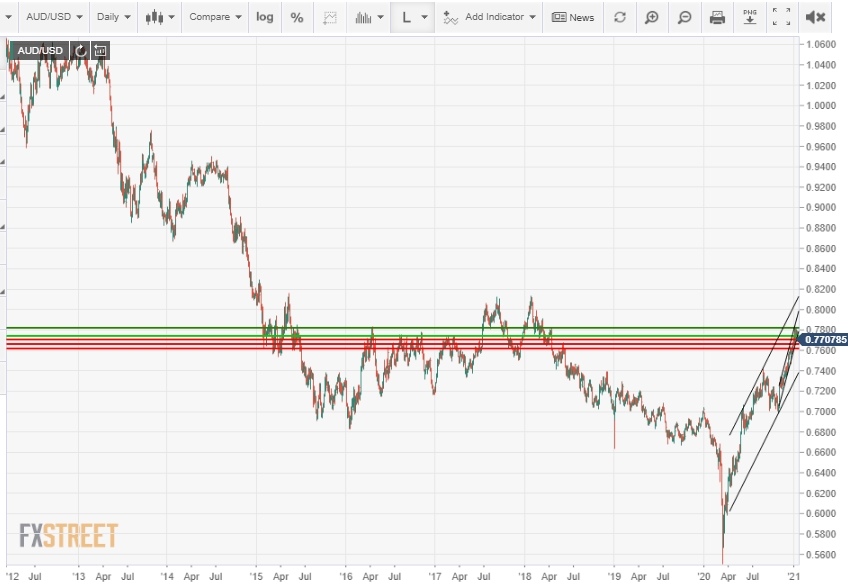 Australian data was negligible. Inflation rose slightly in December as did Retail Sales in November.

American data has detailed the impact of the renewed business closures in California, the largest state economy, and modified restrictions in cities like New York which has again shuttered indoor restaurants.

Retail Sales for December fell in every category reflecting the worsening employment picture. Initial Jobless Claims jumped to 965,000 in the January 8 week (released January 14) the highest total in five months. National payrolls (released January 8) shed 140,000 jobs in December. It was the first decrease since the pandemic lockdown crash in March and April April deleted 22.16 million employees.

Poor US statistics are not driving currency valuations. Despite the information the dollar scored the largest one-day gain against the aussie since October 28 on Friday.

Since the beginning of December there have been two single-day runs that have been barely crossed in subsequent trading: December 10 open 0.7441, close 0.7536; December 30 open 0.7608, close 0.7676. Beneath the 0.7700 support the open and closing rates on these two days form the next four support lines. In addition, the scarce liquidity in December means the rise on these two days was probably accompanied by much less trading activity than would be normal for such sustained moves, leaving the ranges vulnerable to stop-loss placement.

The immediate future for commodity currencies would appear bright. Vaccine enabled pandemic control and elimination is the operative assumption. Even if the tangible results are in the future, currencies have been positioning for that eventuality.

The potential for a profit-taking drop in the AUD/USD to support at 0.7535 is relatively high, particularly if US interest rates continue to rise.

Home Loans climbed 5.6% in November after gaining 0.8% in October.

Retail Sales in December were far worse than expected as were Initial Claims but had little impact on the dollar. Market remain focused on the prospective federal stimulus package and US Treasury rates.

The National Federation of Independent Business Optimism Index (NFIB) dropped to 95.9 in December from 101.4 prior. The forecast was 102.8. The JOLTS Job Openings saw 6.527 million places in November, down from 6.632 in October and below the 6.916 million forecast. 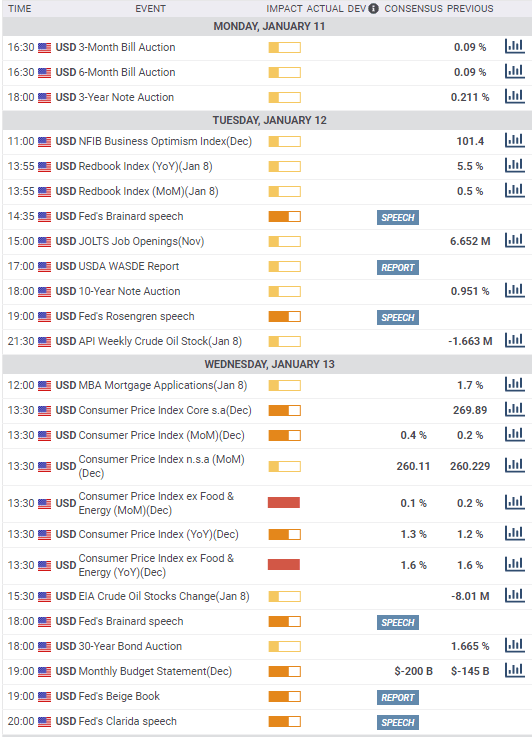 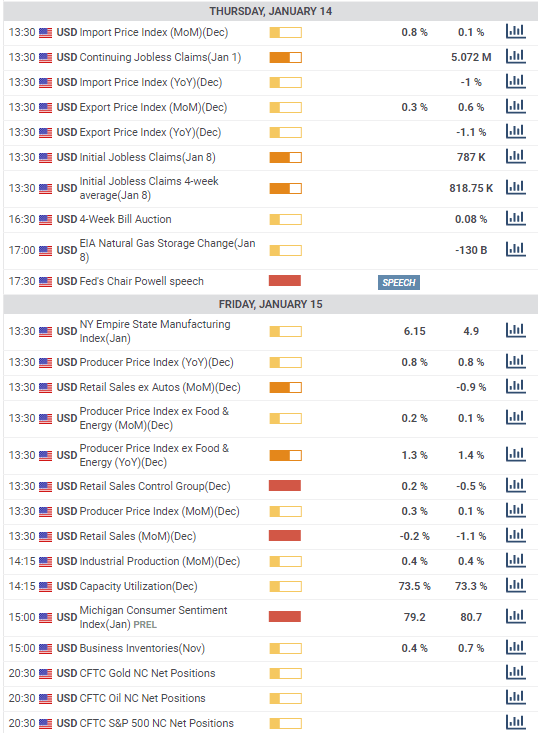 Employment Change for December is expected to add 50,000 positions following 90,000 in November. The recovery has rehired 79% of the workers laid-off in April and May. The Unemployment Rate is forecast to drop to 6.7% from 6.8% and the Participation Rate to edge to 66.2% from 66.1%. Full-time Employment was 84.2% and Part-Time 5.8% in November. The Commonwealth Bank Purchasing Managers' Indexes for January are due. In December the Manufacturing Index was 55.7, the Services Index was 57 and the Composite Index was 55.6.

Retail Sales for December will be released, November rose 7.1%. 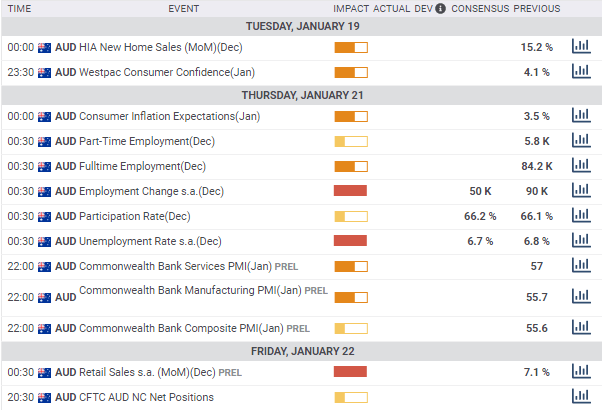 Initial Jobless Claims are front and center for the labor market, though with the focus on the stimulus package, they will not move trading.

National Association of Home Builders (NAHB) Housing Market Index is expected to be unchanged at 86 in January.

Markit Manufacturing PMI is expected to fade to 56.5 in January from 57.1. The Services PMI is forecast to drop to 54 from 54.8. Existing Home Sales should drop to 6.46 million annualized in December from 6.69 million prior. 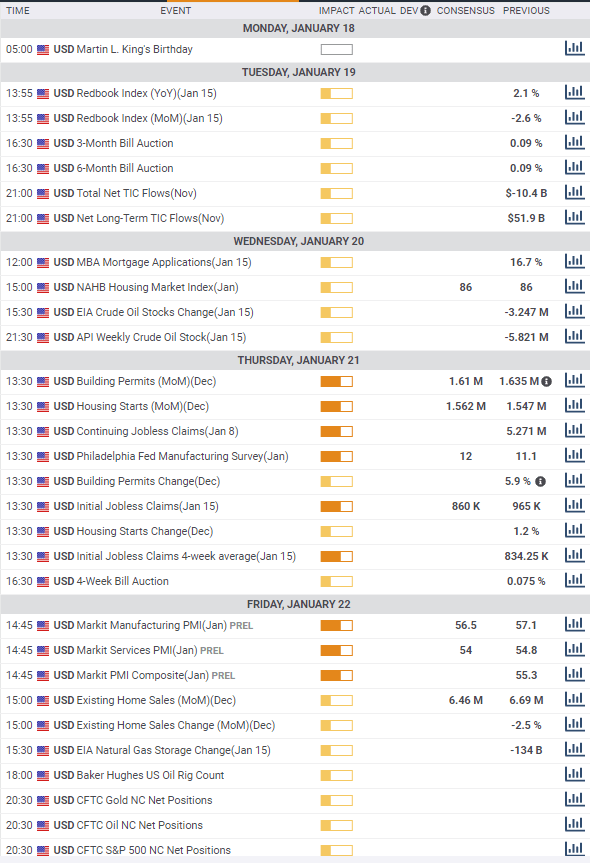 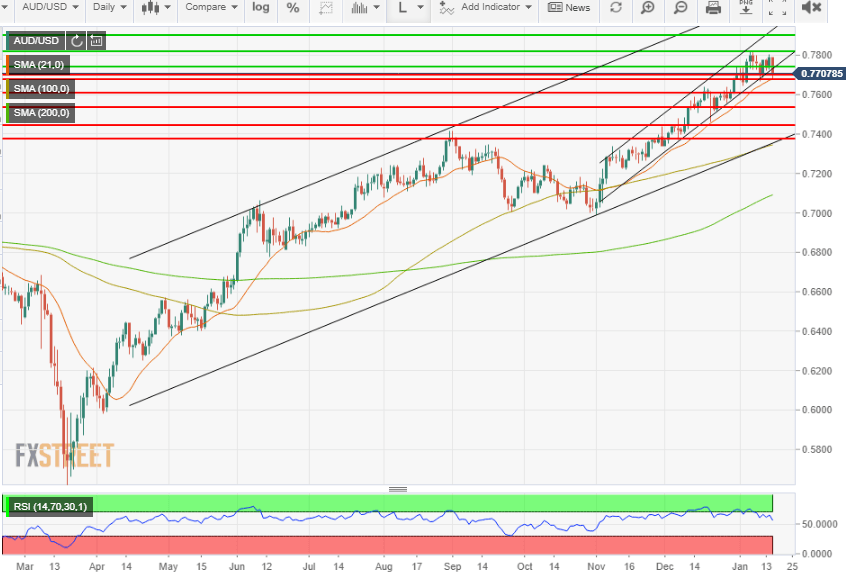 The Relative Strength Index has lost its overbought status this week but at 55.95 is still a sell-signal.The steep and almost unbroken rise in the AUD/USD in the last two months has made the 21-day moving average into a nearly parallel line to the upward channel and at 0.7678 it backs support at 0.7675. The 100-day average at 0.7345 and the 200-day at 0.7092 are well-beyond likely profit-taking range.

The area down to 0.7550 is vulnerable to profit-taking but below that the support is firm and substantiated by fundamental trends.

The FXStreet Forecast Poll expects support at 0.7675 to hold in the initial test but that AUD/USD will eventually succumb to profit-taking to 0.7550. One possible caveat to the delayed drop is US interest rates. If Treasury rates begin to rise again, they stalled this week, the AUD/USD becomes increasingly vulnerable.

GBP/USD holds above 1.4150 after retreating from 34-month highs

GBP/USD trades above mid-1.4100s, extending pullback from three-year high above 1.4200. The UK aims for faster vaccinations to regain economic traction before time. The US dollar rebounds as the risk sentiment worsens.

Dogecoin has made a shallow recovery from the dip to $0.04 on Tuesday. The 'Meme Coin' is dancing slightly above $0.5 amid the push for gains eyeing $0.1. Despite the recovery, DOGE is not out of the woods yet, especially with technical and on-chain barriers in sight.

Gold had good two-way price moves on Tuesday and was influenced by a combination of diverging forces. The early uptick to one-week tops lost steam near the $1816 region amid a goodish US dollar rebound from six-week lows.